Kaththi is just a stylish version of Ramana, made on a lavish budget, bigger star 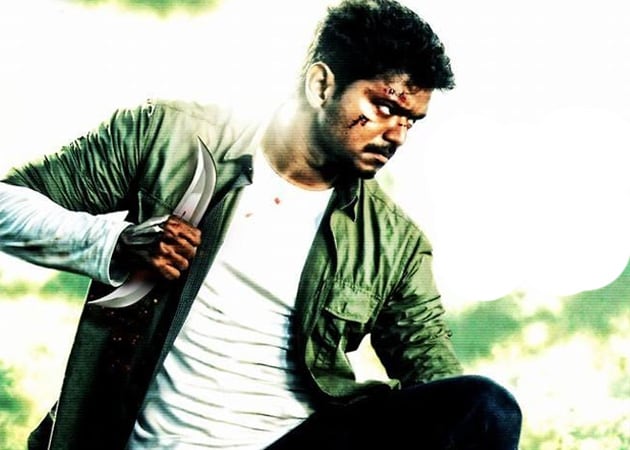 If you've seen AR Murugadoss's Ramana, you are likely to agree that his Kaththi is just a stylish version of the former made on a lavish budget, bigger star, bigger issue, prettier heroine (with no scope for performance) and a lot of melodrama (plight of farmers).

If Vijayakanth was the messiah of Ramana, he's replaced by Vijay in this film. It's evident in the scene where Jeeva (Vijay) tells his villagers not to give up farming even if he has to lose his life, after being bruised up by corrupt cops. He's taken back inside for another round of beating and we see hundreds of farmers weep. Doesn't it remind us of crucifixion?

Kaththi is a commercial film and naturally audiences except some heroism, action and romance in it. But here Murugadoss has portrayed his hero as a messiah, a man of the masses willing to even sacrifice his life. What would he do to make it a masala film? He smartly uses the dual hero concept by introducing us to a crook Kathiresan (Vijay), doing time in a Kolkata prison. As a rule in any film with two heroes, Kathiresan finds himself in the shoes of Jeeva.

Kathiresan as Jeeva is too cool to care about a bunch of senior citizens. But eventually when he comes to learn about Jeeva, he's ashamed and guilty. He plans on running away, but a scene requires him to show his heroic side. A pre-interval fight sequence where Kathiresan happily announces that he will henceforth be called Jeeva.

Post interval, we see Kathiresan gradually turning into another messiah of sorts. But his transformation from Kathiresan to Jeeva is not handled as convincingly as it ought to be. Murugadoss uses this section of the film to indict multinational corporations (MNC) who steal the livelihood of farmers and media for not willing to give villagers a voice.

Towards the end, Murugadoss goes all guns blazing to bore us with startling statistics about the takeover of MNCs. He talks about MNCs manufacturing strawberry-flavoured condoms when most children in villages don't even get to eat the fruit. Who even eats strawberries on a daily basis? Farmers would any day prefer some rice over fruits. It makes sense if you talk about other fruits such as apple being used in beauty products, but strawberry is a bad example. All this is extremely preachy and unrealistic to believe or even commend.

Kaththi does feature a few good moments. A fight sequence involving a bunch of coins is extremely well choreographed. The coins were donated for Jeeva's cause by a group of farmers now employed in low-life jobs. When he uses these coins to beat the henchmen sent by MNC stooges, there's a strong emotional reverberation to the scene. But it's also a flawed scene because the fight takes place in the dark, but for some reason audiences can very clearly see Vijay.

When this action sequence is repeated in the climax, it loses its charm because we appreciate something creative only the first time. It becomes monotonous when it's done the second time. But it's these masala moments that leave Vijay's fans into a frenzy.

Vijay shines in both the roles. As Jeeva, he does touch your heart with an honest performance. But Murugadoss's others characters are extremely weak. The film features the most uninspiring romantic track that makes us feel extremely sorry for Samantha.

The film would've still worked even without a heroine and a love portion. Neil Nitin Mukesh looked terrific in the initial moments, but once again suffers due to poorly developed character.

Kaththi, which translates to sword in English, is largely blunt at the important edges. It reeks of overdose of melodrama and the need to preach.