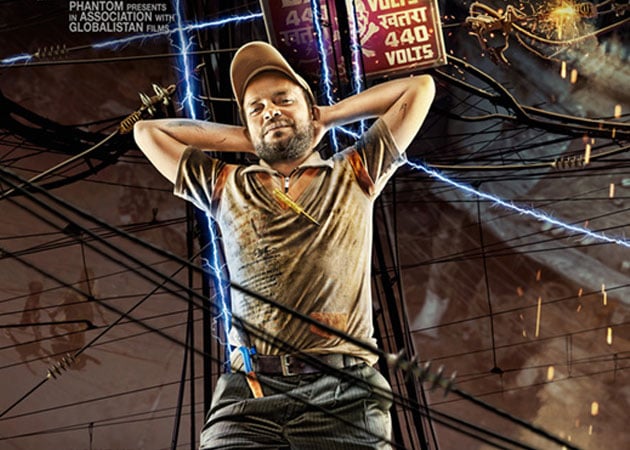 Until Katiyabaaz begins to unfold and draw the spectator willy-nilly into the dark urban hell-hole that it probes, one cannot but be a tad sceptical about the film?s potential.

How on earth, one wonders, can a subject as dry as Kanpur?s perennial power woes sustain an entire feature-length documentary?

All doubts on that count are laid to rest quickly enough. This sharp and free-flowing 84-minute documentary, directed by Deepti Kakkar and Fahad Mustafa, is a crackling livewire of a film.

It paints a portrait of a dysfunctional industrial and residential landscape where outages are a daily, even hourly, occurrence, and it is both engaging and enlightening.
Katiyabaaz narrates the compelling story of a feisty, foul-tongued electricity pilferer who is pitchforked into the role of saviour to Kanpur?s ?needy? citizens.

He helps them by illegally hooking their wires to the city?s power grids so that they can receive electricity, whatever little is available of it, without having to pay for it.

So, is this short and squat man, Loha Singh, a modern-day Robin Hood who robs the state and showers on the poor their share of ?light? against all odds?

Well, Loha is engaged in an unequal battle all right, but as with all unequal battles, the weaker guy possesses the strength that comes from knowing that he has little to lose.
Loha Singh, a fearless rebel, is true to his name. But there is as much iron in his soul as in his will.

He admits to his worried mother that stealing power is the only means of livelihood that he knows. His demeanour is, therefore, marked by equal measures of bravado and vulnerability.

Loha Singh is fully aware that the work he does is fraught with risk, both legal and physical.

While Kakkar and Mustafa show him up for what he really is ? a power thief ? he is also an object of sympathy.

Katiyabaaz focuses on another spirited lone ranger ? a fiercely committed IAS officer who takes over as the chief of the Kanpur Electricity Supply Corporation (KESCO).

This bureaucrat, Ritu Maheshwari, sets out to fight a slew of battles against irresponsibly cynical politicians, power-filching citizens and her own corrupt and slothful subordinates who are party to the collective con.

She, too, has no delusions about what she is up against ? an insurmountable wall of apathy and manipulation ? but she carries on regardless.

Loha Singh and Ritu Maheshwari are at opposing sides of the social scale, but they are alike in one crucial respect. Both have chosen a path where one false step could prove extremely costly.

It is the English title of Katiyabaaz ? Powerless ? that fully sums up the Kanpur scene and the plight of the film?s two protagonists.

The electricity-starved people, the more daring bureaucrats and the likes of Loha Singh are completely at the mercy of a system where, when push comes to shove, the only power that counts is the one that stems from the corridors of the legislature and the secretariat.

Ms Maheshwari knows that the threat of a transfer is forever dangling over her. Loha Singh, on his part, spends his days atop buildings and electric poles working with the ugly maze of wires that hang dangerously over the large parts of Kanpur.

The two central figures in Katiyabaaz are heroic and tragic figures ? one lives in a government bungalow, the other ekes out a living by bending government rules.

The film also draws some of its power from the fact that the validity of its story isn?t confined to Kanpur alone.

It extends to virtually every Indian small town where resources are scarce and where the administration is too busy serving the interests of the political class to notice how bad things are.

For those at the receiving end, it means breaking the law and courting trouble.

But life must go on, as it does for Loha Singh, who, often in an inebriated state, resorts to both expletives and earthy wit to give vent to his anger and frustration.
Katiyabaaz is both entertaining and unflinching in its depiction of an India that lags light years behind the rest of the civilised world but isn?t willing to give up without a fight.

This powerful little film is a must watch.