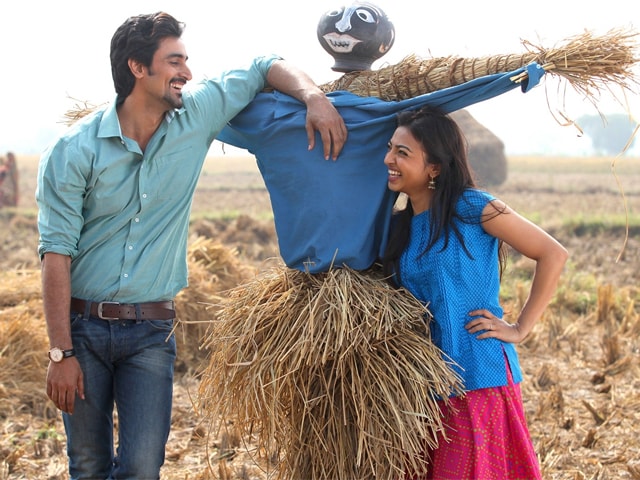 The film takes a cross-eyed look at the deepening water crisis and changing social order in rural India, specifically in a parched part of Odisha.

It rains a flurry of blows on its chosen targets. However, not all of them find the sweet spot.

That at times is the film's undoing. Greater focus on its central theme may have lent it the sharpness that it needed in order to cut deeper.

But that said, there is much to admire in some of the reflections of reality that Kaun Kitney Paani Mein captures.

Panda interlaces the spirit of his kind of activist cinema with the dynamics of crowd-pleasing storytelling in an attempt to deliver a pressing public interest message couched in a lighthearted style.

The outcome is not consistently salutary. The high-mindedness of Panda's enterprise gets adversely subsumed all too often in the air of mirth that the film strives to generate.

That apart, Kaun Kitney Paani Mein does not do enough to conjure up the ethos of the cinematically neglected cultural landscape that its quirky narrative is set in.

Panda throws in a peppy Hindi version of the timeless Sambalpuri folk song, Rangabati, to evoke a sense of place and musical tradition, but the film's specific regional moorings remain ambiguous.

This is despite all the Odia wall writings, posters and handbills that the audience sees all through Kaun Kitney Paani Mein.

The storyline is engaging enough and a few of the performances are compelling. And the film's folksy, absurdist spine holds up well for the most part.

So, notwithstanding the many failings, Panda must be lauded for tackling a theme that nobody else would have addressed with the same degree of conviction.

Kaun Kitney Paani Mein is the story of two sets of bickering villagers who have a history of terrible inter-clan violence that goes back three decades.

One group, made up of people of higher birth, lives in the upper village. The other, composed of the downtrodden and dispossessed, resides in the lower village.

The upper village, which has no water, is lorded over by Raja Braj Kishore Singh Deo (Saurabh Shukla), the profligate scion of a royal family who has fallen on hard days but has lost none of his bad habits.

The lower village is flush with water, thanks to the rain that its denizens harvested 30 years ago to create a pond in their midst.
The headman of this hamlet is Kharu Pehelwan (Gulshan Grover), a wannabe Dalit politician who has scores to settle with the Raja and his men.

The film has a bunch of oddballs. A wily priest grows marijuana in his temple's backyard, a feisty sex-worker receives water pouches by way of payment for her services, and a gritty weaver is intent on digging a tunnel to gain access to the water source that will help him get rich quick.

To return to the story, the dissolute Raja finds himself in a bind as the water shortage in his village worsens. Not only are there no takers for his barren tracts of land, he also runs out of water to pour into his pegs of whisky.

He exhorts his only son, Raj Kishore Singh Deo (Kunal Kapoor), to go down to the lower village and seduce Paro (Radhika Apte), Kharu Pehelwan's daughter. The plan is aimed at ending the upper village's water woes.

But the conspiracy backfires. Raj and Paro fall in love and all hell breaks loose in the two villages.

"I do not believe in caste, I believe in circumstances," the stubborn Raja repeatedly insists, quite oblivious of the fact that the wheels of history have already trundled too far beyond his control.

While Saurabh Shukla turns in a robust performance as the pitiable but unstoppable landlord, Gulshan Grover is left groping in the dark because his character suffers from serious under-development.

The love story is only one of the several strands of Kaun Kitney Paani Mein - it takes centrestage only when it triggers the climactic farce-tinged mayhem.

So neither Kunal Kapoor nor Radhika Apte has much to do beyond floating around talking about soil re-mineralisation.

Soil re-mineralisation? That is unprecedented for a Hindi film. Kaun Kitney Paani Mein goes where Hindi cinema rarely ever does. For that alone it deserves to be seen.