Khoobsurat is both funny and flashy, but its many flourishes are delivered in measures that religiously avoid excess 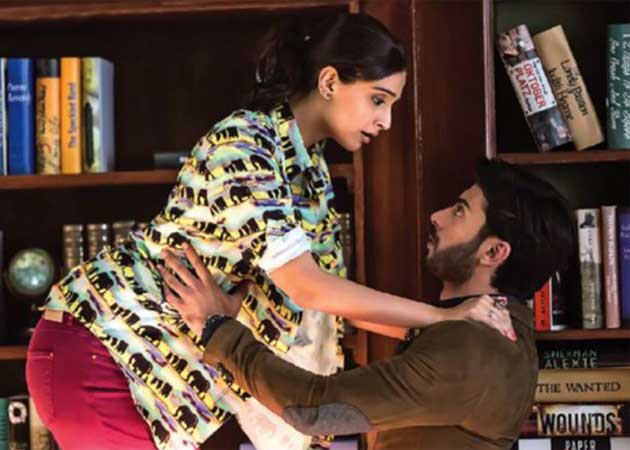 Who doesn?t know that remakes of movie classics can be seriously risky business? Many in the Mumbai movie industry have in recent times made a complete hash of a rehash and burnt their fingers real bad.

But not so the makers of Khoobsurat.

The Quick Gun Murugan director is quick on the draw here, and hits his stride right from the outset.

He opts for merely the kernel of the old idea, throws in a few new madcap twists, and then serves up the gleaming cocktail in a pretty tall glass that doesn?t crack under the weight.

Khoobsurat, buoyed by an incandescent Sonam Kapoor, a rock-steady Fawad Khan and a fabulous supporting cast, is smartly crafted, well acted and endearing. Well, for the most part at least.

It is a rare Bollywood romp in which everyone involved, on the screen and off it, seems to be having an unabashed blast.

The enthusiasm inevitably rubs off on the final product, making it funny without being unduly fluffy.

One key driving force behind the original hit was the brilliantly workaday dialogue penned by Gulzar.

The remake may not be quite up there in that crucial respect, but the writing is infused with enough wit and intelligence not to be an effort more scintillating in ambition than execution.

The middle class milieu of yore is replaced here with a sprawling palace in Rajasthan run with an iron hand by an uppity maharani, Nirmala Devi Rathod (Ratna Pathak Shah). She brooks no transgressions in the household.

Enter garrulous and unbridled physiotherapist Mrinalini ?Mili? Chakravarty (Sonam Kapoor). Her brief is to get the royal patriarch Shekhar Rathod (Aamir Raza Hussain) off the wheelchair that he has been trapped in for the past decade.

Mili quickly realizes that there is a man in the house far more interesting than the morose maharajah ? a dashing but deadly boring prince who only talks shop, Vikram Singh Rathod (Fawad Khan).

Between clicking selfies in different eye-popping parts of the palace and chatting on Skype with her motor-mouth mom back in Delhi ? the young lady decides to stir things up a bit.

She is a noisy eater, has questionable table manners, drinks wine straight from the bottle, and thinks nothing of joining the kitchen orderlies in a riotous binge.

The rule-book is repeatedly thrown at her, but the half-Punjabi, half-Bengali big city lass cares two hoots about the funereal air that hangs over the family and focuses solely on finding ways around it.

But this guest is more than just any odd blissfully ignorant outsider ? she is a full-blown rebel who believes in doing exactly as her heart desires, a trait that is actively encouraged by her mother.

The inevitable clash that ensues between carefree Mili and no-nonsense Nirmala Devi forms the crux of the plot, but the rest of the story pans out very differently from the way it did in the Hrishikesh Mukherjee film.

By not following the known script in its entirety, the peppy Khoobsurat acquires a degree of freshness and unpredictability that is appreciably accentuated by the uninhibited cast.

Sonam Kapoor dives enthusiastically into the role of the bubbly Mili and comes up with a delightfully droll star turn, investing the character with both elfin charm and infectious goofiness.

Ratna Pathak Shah and Aamir Raza Hussain (both wonderfully in sync with the demands of the screenplay) add to the uniqueness of the casting.

Wish one could say the same about Kirron Kher, who repeats her done-to-death loud, loquacious, irrepressible Punjabi mom act yet again.

Not that Kirron is any less competent than she usually is, but her overtly hammy performance appears a tad out of place in Khoobsurat.

The pitch that she adopts belongs elsewhere in the Bollywood entertainment spectrum, not in a film that is otherwise so refreshingly far removed from the run of the mill.

It is quite another matter that Kirron Kher, with her rat-a-tat punchlines, will probably get the biggest laughs of all.

Among the brighter elements of Khoobsurat are the wonderfully off-kilter compositions by music director Sneha Khanwalkar.

What helps the songs sound even better is the fact that they are not staged in the conventional manner.

The exchanges between two opposites ? serial rule-breaker and staid royal scion ? play out on a dual track, one through the spoken lines and the other through an audio approximation of graphic novel thought bubbles.

That device adds to the humour quotient by underscoring the glaring gap between what is going on in the minds of the two protagonists and what they actually end up saying to each other.

In the end, Khoobsurat is a pretty good show. It is both funny and flashy, but its many flourishes are delivered in measures that religiously avoid excess.