Ki And Ka reinforces the gender stereotypes it wanted to break 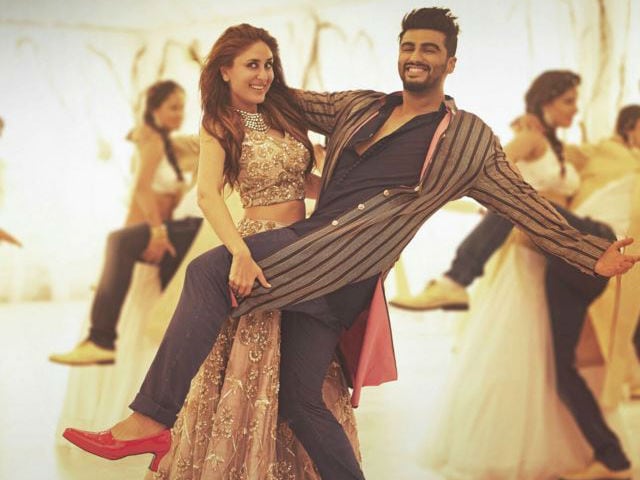 The hero and the heroine of Ki And Ka share a birthday - April 15. So when they decide to marry, the couple chooses the same date as D-Day.

While they are at it, one of them reminds the audience that the Titanic, too, sank on April 15.

How very fitting! Ki And Ka, writer-director K Balki's fourth feature film, is all at sea as it tries to steer its ambitious concept to the shore.

A rom-com about a man who thinks nothing of wearing the mangalsutra in his marriage, it does no justice to the novelty of the theme.

Ki And Ka has a six hundred pound gorilla of an idea to work with, but it is so leaden-footed and whimsical that it stomps its way through two hours and a bit without getting anywhere near its destination.

The male protagonist, 27-year-old Kabir Bansal (Arjun Kapoor), has no interest in the wealth of his realtor-father (Rajit Kapur. He aspires to be like his departed mom, a homemaker.

A B-school topper, he is determined to spare himself the pain of faaltu mehnat (worthless hard work).

The film's heroine, Kia, three years his senior, is a marketing manager with an FMCG company. A 'corporate robot', she is intent on climbing the corporate ladder in a hurry.

The two meet on a Chandigarh-Delhi flight. It's Kabir's mom's birthday and he tearfully mopes over her absence.

Kia's heart melts at the sight and they strike up a conversation. Over the next few scenes, they jibber-jabber incessantly and figure out that they complement each other.

They get hitched, pronto. The rest is all downhill. Ki And Ka is laboured, lightweight and lacklustre.

It is pulled down by a persistent air of frivolity despite all its well-meaning PC speak on gender equality and freedom of choice.

The screenplay is riddled with details that border on the illogical.

It is difficult to fathom, for instance, exactly why an adult male's obsession with trains would be so overpowering as to drive him to turn his home into a railway museum.

Apart from probably serving the purpose of providing an insight into Kabir's childlike mindset and of enhancing the visual design of the film, this aspect of his personality gives the director a pretext to shoot long passages in the National Rail Museum and the Rewari Loco Shed.

And, of course, it allows food to arrive at the dining table on a toy train that chugs back and forth from the kitchen.

Given Kia's high-flying ways, it might appear that money is no constraint for the couple: Kabir refurnishes the entire rented apartment overnight without losing any sleep.

But when they are compelled to think of buying out the flat, they go into a tizzy over the state of their finances and the need to take a housing loan.

We do catch Kabir fretting over the pricing of the health food variants of milk and cereals, but never for a moment does the couple come across as cash-strapped.

But their plan works to perfection because Kabir is only too happy to be a stay-at-home hubby.

He does a great job of keeping a watch on his wife and his mother-in-law's diet, supervising the maid, doing the cleaning and the shopping, and even hosting kitty parties when push comes to shove.

That leaves the ambitious Kia to pursue and achieve her goal of becoming the fulcrum of the boardroom.

But even as her meteoric rise attracts the media spotlight, her husband becomes a social celeb in his right for his nonconformity.

Kia - and this is about the only juncture in the film where something actually happens - gets the jimmies and the carefully cultivated connubial relationship comes under severe strain. That, in a nutshell, is Ki And Ka.

But barring a short portion featuring Amitabh and Jaya Bachchan (as themselves) discussing how things would have turned out had the latter had not given up her acting career for the sake of the family, there is little in here that manages to grab attention.

The two leads smooch a great deal and are pretty active between the sheets. But somehow, owing to the lack of chemistry between Arjun and Kareena, they do not set the screen on fire.

A concept film that has a lot to say - Ki And Ka actually succeeds in getting a few of its points in edgewise - but the writing is below-par.

As a consequence, Ki And Ka is like a string of patched-together monosyllables that never attain sustained coherence.

In seeking to break gender stereotypes, the film actually ends up reinforcing them.

The director isn't content with establishing that Kabir is not a freak and like all 'normal' men, loves women and whiskey.

He throws in a sequence in which the hero bashes up three goons who make crude passes at his wife. Kia instantly applauds her hubby's "Dharmendra wala side".

Ki And Ka has prettified images (cinematographer: P.C. Sreeram) and a flawless ad-film veneer. Both tend to draw attention away from the travails of an unconventional marriage that the film wants the audience to focus on.

All through the film, sundry characters, including Kia's widowed social activist-mother (Swaroop Sampat), allude to pillars that hold up buildings while talking about the institution of marriage.

Too much talk and very little plot progression put the skids under the film. Ki And Ka goes belly up pretty quickly never to recover fully.

Verdict: With its promising premise undermined by erratic execution, Ki And Ka is only intermittently watchable.