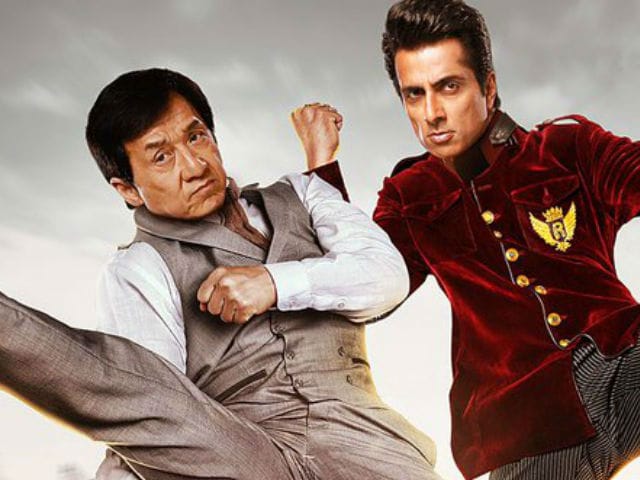 Kung Fu Yoga Movie Review: Jackie Chan and Sonu Sood in a poster of the film

There is no way of knowing if Jackie Chan was tempted to plunge into this disorienting whirl of a film by the chance to dance to a peppy Bollywood beat, but he sure does a swell job of the hand gestures and body feints that the routine demands. Stanley Tong's overheated film ends on an off-key musical note after two warring sides - a band of well-intentioned treasure hunters and a gang of grab-and-run mercenaries - have had a series of violent confrontations over a diamond-studded key to a fabled treasure trove hidden in a long lost kingdom. Abrupt and illogical as it might be in the context of the adventure tale that Kung Fu Yoga is meant to be, Chan's Bollywood dance moves are by far the most charming part of the film. Pity it is a case of too little too late. 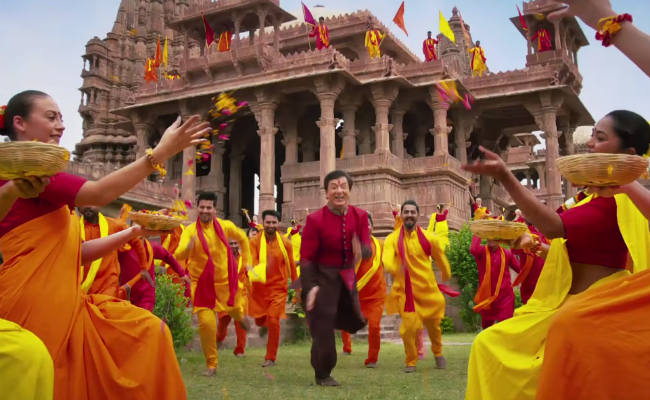 The song, which draws everybody, including the baddie, into its flow, constitutes a small concession in a film where Yoga is doomed to play second fiddle to Kung Fu.

Jackie Chan and Aarif Rahman, perpetually in action mode, peddle the power of Chinese martial arts while the benefits of Yoga are mentioned only in passing.

Principal antagonist Sonu Sood, who plays a descendant of a renegade Magadha empire general but is inexplicably called Randall, occasionally employs Indian wrestling techniques in combat when he isn't barking orders to his lackeys.

But this guy is generally reduced to taking his action-cues from Chan and his gang. Kung Fu Yoga is skewed in favour of China in every which way.

But to read any larger political and cultural motives into how the film pans would be completely misplaced. Kung Fu Yoga is too over the top to in any way impact the world's comprehension of Sino-Indian equations.
A dizzyingly fast-paced but musty mish-mash of martial arts, stunts and comedy, Kung Fu Yoga isn't the kind of film that has any time to pause and ponder.

Neither, obviously, would its audience be inclined to seek deeper meaning in its fantastical narrative construct.

The breathless pace that Kung Fu Yoga sets obviates the possibility of the audience fully grasping what is unfolding on the screen.

The locations are diverse and impressive. The film has been shot in China, Iceland, Dubai and India. The prime locations are the Terracotta Warriors Museum in Xi'an, an ice cave (purportedly in China's Kunlun Mountains), the camel race tracks and streets of Dubai, and the deserts of Rajasthan are the prime sites. The film culminates in a temple of gold watched over by a glittering idol of Lord Shiva.

Long-time creative collaborators Chan and director Tong spin a yarn that is obviously aimed at chucking the Indian and Chinese styles of filmmaking into a pot and stirring them up. The resultant froth is anything but heady. There is little in Kung Fu Yoga that might send Indian audiences into raptures. 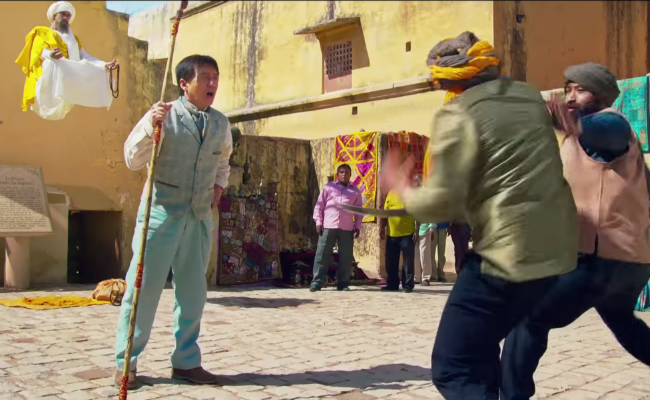 That apart, the Bollywood members of the cast are no crowd-pullers and they are saddled with sketchily written roles. The rope trick and the levitating sage, too, have obviously lost currency as devices.

What harms the film that most is that Chan is clearly no more the awe-inspiring action star that he was in the 1990s. So his physical stunts look laboured and he seems to huff and puff his way through them.

Yoga is doomed to play second fiddle to Kung Fu

Kung Fu Yoga has the looks of a rather ill-advised rehash of The Myth, a box office bomb that the same actor-director firm had delivered over a decade ago.

Chan is back to playing a Chinese professor and archaeologist who, we are told, has invented a revolution colour restoration technique for the Terracotta Warriors.

This renowned man, Jack, has devoted his life to the mission of unearthing treasures of the past and restoring them to the cultures that they rightfully belong to.

To further his noble cause, he teams up with a comely Indian professor, Ashmita (Disha Patani), and her teaching assistant Kyra (Amyra Dastur). 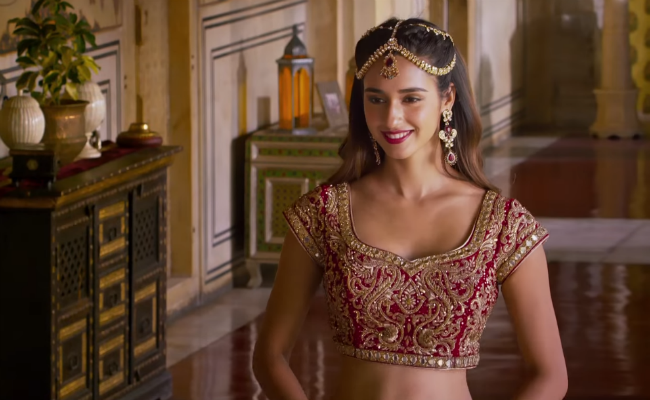 All three have a personal stake in finding the treasure before anyone else can. And so does Jones (Aarif Rahman), the son of a deceased archaeologist who is determined to do anything it takes to complete his father's unfinished business.


One longish sequence is allocated to Rahman and Dastur, who are incarcerated by the villain in an enclosure of hungry hyenas.

It takes the intervention of Zhang Yixing (playing a part of Jack's treasure-hunting entourage) to get them out of trouble. He manages, but not before he loses a shoe and a bit of flesh off his ankle.

Earlier in the film, in a car chase across Dubai, Chan's character is trapped in the driver's seat of an SUV with a lion breathing down his neck.

While the man escapes without a scratch despite the many crashes, leaps and thuds, the poor four-legged creature, at the end of the ordeal, emerges from the vehicle and throws up on the road. Yikes!

Imagine yourself in the place of the lion. If you don't find your innards in a knot by the end of the film, your head will certainly be in a spin. You won't, for sure, be breaking into dance.