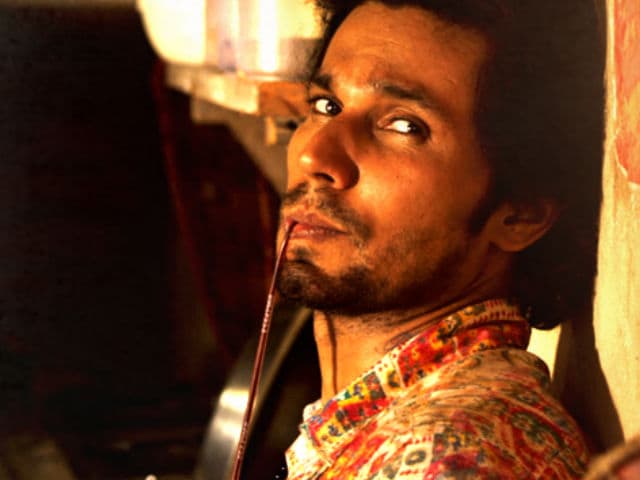 Randeep Hooda is one of the most underrated actors working in Hindi cinema today. But give him a role - any role - and he digs his teeth deep into it and turns in an absolutely riveting performance.

Given how surprisingly good the film is, Hooda's spellbinding star turn isn't a wasted effort.

Laal Rang spins an unhurried but engaging tale of love, friendship, heartbreak and redemption against the seamy backdrop of Haryana's blood theft racket.

An understated thriller that keeps the conventions of the genre at bay, it has no gunfights, no big chases, and no stylized, in-your-face jabs at generating edge-of-the-seat excitement.

It explores several tangible relationships, most notably the one that develops between the protagonist and a young drifter, son of a government peon and the film's narrator.

The latter is sucked into the blood racket that is rampant at the institute where he enrols for a diploma in medical lab technology.

The setting of Laal Rang is Hooda's home turf, and the actor captures the nuances of language and diction to perfection.

All credit is due also to the director for dealing with a dark theme with admirable restraint and not succumbing to the temptation to soup up the drama for mass consumption.

The character that Hooda plays isn't a conventional Hindi film goon whose demonstrative swagger is matched only by his trigger-happy bravado. In fact, he does not even need to wield a gun to ply his trade.

Hooda is Shankar, a cocky, well-connected Karnal underworld kingpin who takes an aimless younger man, Rajesh Dhiman (Akshay Oberoi) under his wings and teaches him the ropes of the dangerous business.

The anti-hero is invested with unusually positive characteristics. Shankar is no heartless ogre.

He is fiercely loyal to his new friend. He also has a woman (Meenakshi Dixit) who he pines for. And he takes good care of the donors - mostly needy migrant rickshaw-pullers - who give him blood for a few hundred rupees.

Whether he is dealing with trusted associates - one of them is a man who jocularly calls "the Dracula of Delhi" - and rivals, his macabre sense of humour never deserts him.

The work Shankar does is hateful, but he isn't an unpleasant man to know. In capturing the contradictions embedded in the character, both the screenplay (by Syed Ahmed Afzal and Pankaj Matta) and the lead actor tick the right boxes.

Shankar's home is a shabby room with a poster on the wall with Netaji's face and famed exhortation to his countrymen: you give me blood, I will give me freedom.

The freedom that Shankar seeks is, of course, linked solely to the one that only money can buy.

That is one of the baits that he dangles before Rajesh, who, on his part, sees in the racket an opportunity to expedite his marriage with Saharanpur girl Poonam (Piaa Bajpai, in her first Hindi film role).

When a PD - professional donor - drops dead after giving blood once too often, the law closes in on the mafia, with SP Gajraj Singh (Rajneish Duggal) vowing to wipe out the wrongdoers.

Laal Rang is a slow-burning drama about human blood-hounds that takes a while to come into its own, but when it does it has enough meat to last the course.

Hooda might be in a 'rockstar' league of his own, but he does receive solid support from the other principal cast members, all of whom play characters firmly situated within the realms of the real and tangible.

Akshay Oberoi, who has a hard act to follow, manages to hold his own. Rajneish Duggal, in the guise of a cop, has far less footage but makes the most of the limited opportunities.

Piaa Bajpai informs her interpretation of the character of a gauche girl who speaks 'Rapidex' English with gay abandon, with warmth.

The cast also has Meenakshi Dixit in the role of the woman Shankar loves and Shreya Narayan as the lab supervisor who has a massive crush on the blood pilferer.

These may be walk-on parts but the characters aren't insignificant. That's the hallmark of a good script: even the minor figures have a defined role to play.

A small film whose impact is enhanced manifold by Randeep Hooda's presence, Laal Rang also has other bright spots. But cottoning on to them might call for patience.

Spare some, and you might just find Laal Rang worth your while.