Margarita, With A Straw Movie Review

Do not pass up a sip of Margarita, With A Straw. It could be life-altering. If nothing else, it will soak you with its warmth 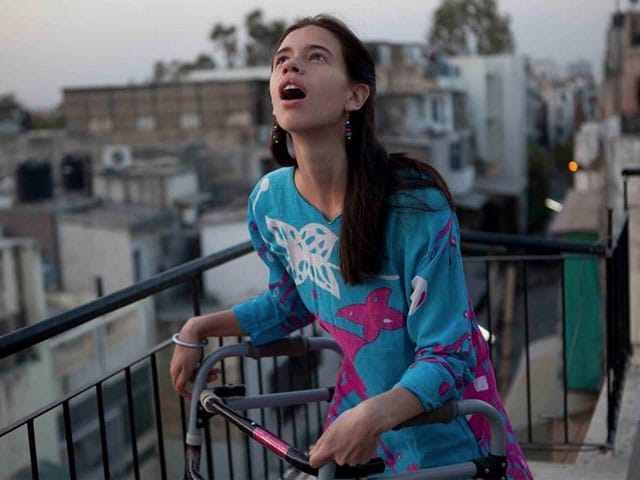 Director Shonali Bose and lead actress Kalki Koechlin are on top of their respective games in Margarita, With a Straw, an offbeat drama that is both sensitive and provocative.

The wonderfully well-scripted film (screenplay: Bose and Nilesh Maniyar) focuses on the most intimate physical and emotional needs of a woman with cerebral palsy.

It delivers a poignant and uplifting portrait of an individual determined to live life to the lees despite all the odds she faces owing to her restricted motor skills.

Margarita, With A Straw narrates its emotionally arresting and startlingly revelatory story without resorting to the mawkish or the preachy.

It is the sophistication of the making that stands out: Margarita, With A Straw is adroitly crafted. It eschews tear-jerking theatrics. And it does not take recourse to any shrill remonstrations to get its point across.

The protagonist, Laila (Koechlin), is unlike any heroine that Indian cinema has ever showcased.

She is physically challenged, but that isn?t the only aspect of her personality that the director underlines. Laila has to contend with several other ?minority? identities.
She is a woman in a man?s world. She is a Sikh?s daughter. And her sexual orientation isn?t obviously deemed ?normal? by those that that do not know better.

But nothing at all can stop Laila from pursuing the urges of the flesh and soul in quest of self-fulfilment.

In the film?s early scenes, it isn?t easy to grasp the words that trickle out of her lips ? and that is exactly how it would be for any of us if we were to meet a person with CP in real life.

But soon enough, once we have warmed up to Laila?s manner of enunciation, all barriers to comprehension vanish.

Laila ? and the film ? grows on us steadily as she emerges as a ?full-bodied? character making no bones about her need for sexual gratification.

So nuanced is the characterisation that the fact that Laila is a physically challenged woman eventually ceases to matter.

Rarely, if ever, has an Indian film portrayed disability with such matter-of-fact directness, without mining it for undue sympathy for an afflicted character?s plight. Margarita, With A Straw only seeks rounded understanding.

It manages to evoke a full appreciation of the adventurous spirit of a woman who breaks all preconceived notions about life in a wheelchair. Laila is as stoic as she is heroic.
Laila?s mother (Revathy) is the magnifying glass through which we view her.

She is Laila?s one-woman support system. She stands rock-solid behind her daughter despite the moments of tension and unease that inevitably erupt when the latter comes out.

Bose brings a remarkable lightness of touch to bear upon a plot that might at first glance appear to be primarily geared towards accomplishing an awareness-raising mission.
The film certainly gives the audience a peek into the inner world of a differently-abled woman whose urges are, if anything, more pronounced than everyone else?s.

But Margarita, With A Straw isn?t only about disability and homosexuality. Its focus is also on questions of identity and personal choice, and above all of humanity.

Laila is a charming and talented rebel on a wheelchair. She writes lyrics for a Delhi University college band and is the cynosure of all eyes.

Raging inside her are hormones that she is loath to suppress. Laila has a crush on the lead singer of her band and articulates her feelings to him. But the boy spurns her, leaving Laila gutted.

A full scholarship from New York University allows her to make a clean break and move on. With her mother by her side, Laila quickly makes herself at home in the Big Apple.

There, Laila falls for a British boy Jared (William Moseley) who is assigned to help her with typing.

And then she meets Khanum (Sayani Gupta), a half-Bangladeshi, half-Pakistani girl she bonds with instantly. She is sightless, and Laila?s growing proximity to Khanum evolves into something more than mere friendship.

The film takes a dramatic turn from this point on as it tracks the evolution of the Laila-Khanum relationship and the consequent threat of the protagonist drifting away from her mom.

Of the many surprises that Margarita, With A Straw has in its folds, none is as big as the virtuoso performance that Koechlin delivers.

She is absolutely brilliant as Laila ? so powerful and convincing that she completely sucks the audience into her complex world.

The seasoned Revathy and the one-film-old Sayani Gupta, the two women who bear witness to Laila?s struggles to find her footing in life, provide perfect foils to the central performance.

Do not pass up a sip of Margarita, With A Straw. It could be life-altering. If nothing else, it will soak you with its warmth.