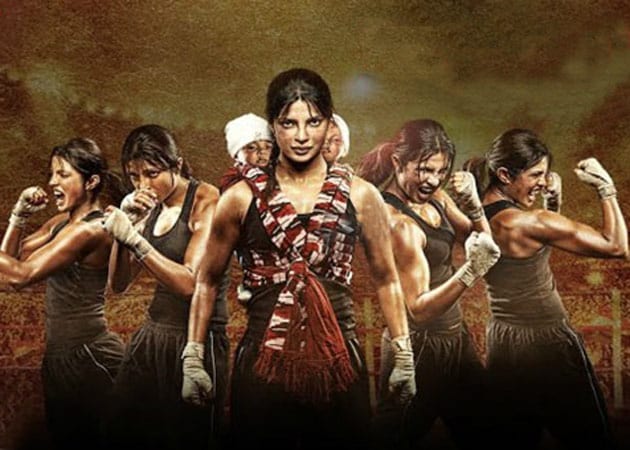 The obviously questionable casting of Priyanka Chopra as the lead actress and the choice of the principal shooting locations (Manali, Dharamshala, et al) are the least of the numerous glaring problems that mar first-time director Omung Kumar?s well-intentioned but excessively effusive Mary Kom.

The film presents a preposterously strident re-enactment of a real-life blood-and-sweat tale.

It is aggravated manifold by injudicious use of musical numbers and a loud, unsubtle background score rustled up ostensibly to highlight the intensity of the protagonist?s many struggles. It only ends up being more distracting than piercing.

What Mary Kom achieves is just the opposite of what it sets out to: the perpetually-on-the-edge style of storytelling takes the sting and authenticity out of the story of the inspirational rise of the spirited daughter of a Manipuri rice farmer in the world of amateur women's boxing.

Not that Priyanka is a complete washout. Far from it ? there are parts of the film where she manages to make the audience forget that she simply isn?t the right face for Mary Kom?s role.

She plunges into the character with all her might and when the writing is somewhat sensible, she is more than passable.

Sadly, that is not often enough because Omung Kumar decides to craft the Mary Kom story as an out-and-out Bollywood melodrama about a woman who negotiates familial and societal odds to emerge on top rather than a genuinely heartfelt and pinpointed sports movie about a world champion.

In any case, it is a tall order for the hardworking Priyanka not to stick out like a misguided missile amid the likes of Robin Das, Rajni Basumatary (as Mary Kom?s father and mother respectively) and Sunil Thapa (as her coach), who meld in far more easily with the purported setting of the film.

Even the music employed in Mary Kom ? there is a surfeit of it, in the form of both songs and background effects ? does not do anything at all to accentuate the flavour of Manipur.

The first few scenes of the film take cognizance of the unrest that Manipur has been witness to for decades and which has impacted the lives and livelihoods of the state?s youngsters caught in the crossfire between rebels and the security forces.

The screenplay, however, does not go through with that strand of the narrative, abandoning it all too quickly for it to become an integral part of the film.

The bouts between Mary Kom and her opponents (despite the much publicized use of specialists and action experts) are staged more like violent freestyle street fights than thoughtfully choreographed boxing contests.

Mary Kom is another reminder that sports biopics aren?t up overkill-loving Bollywood?s street.

It shows why the Hindi movie industry should steer clear of the task of chronicling the lives of India?s sporting icons. There are anyways only a handful of such athletes who can rightfully lay claims to greatness. Why toy with their exciting stories and reduce them to labored fairy tales?

But all said and done, Mary Kom is an infinitely better sports film than the bloated mess called Bhaag Milkha Bhaag.

If nothing else, Omung Kumar shows an occasional inclination to locate his narrative in largely believable settings and situations. It is in the pitching of the drama that he goes wrong.

A couple of the characters are utterly unconvincing. The boxer?s husband, played by Darshan Kumar, is too much of a willingly suffering man to be true.

And the boxing federation boss who makes life miserable for Mary Kom and other female boxers is a brazen caricature that gobbles up footage without adding any value to
the story.

The question is: should you watch Mary Kom? You should, the simple reason being that we owe it to the pugilist who has gone where few Indians have ever gone ? to the pinnacle of her sport ? and stayed there long enough not to be remembered as a flash in the pan.