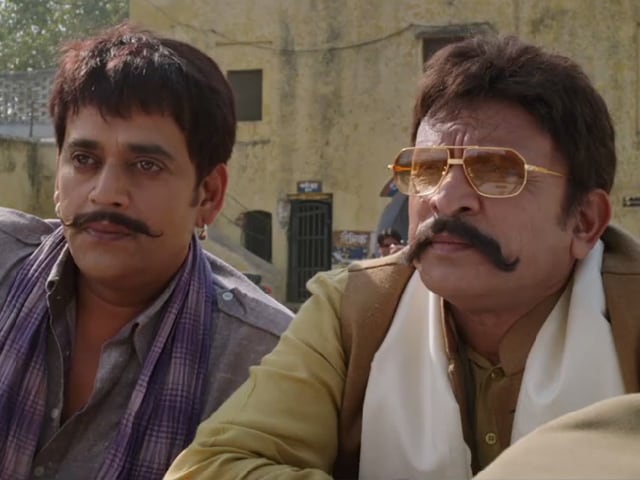 Do not look for surface gloss in Miss Tanakpur Haazir Ho. There is none. It is after all a film about a baffled buffalo whose plight is meant to show us why the law is such a blind ass.

For those looking for a break from the Bollywood staple of star-studded, buffed up, feel-good entertainers, this film might be two hours and a bit well spent.

But be warned: its blend of the unabashedly scatological and the wildly absurd may not be for overly touchy palates.

For all its obvious flaws, television journalist-turned-filmmaker Vinod Kapri's debut is a meaningful and bruising satire on a pliable judicial system that cannot protect the weak and the meek.

Miss Tanakpur Haazir Ho is out to employ humour to make a point and it does not shy away from adopting means that border on the unabashedly unrefined, take it or lump it.

At the core of the film is a young villager who is falsely accused by the headman of sexually assaulting a buffalo and is ordered by a khap panchayat to marry the 'victim' by way of expiation.

Sounds bizarre? It is. But to Kapri's credit, Miss Tanakpur Haazir Ho turns its preposterous premise into effective grist for a dogged take on a society where unbridled power breeds utter and unending stupidity.

In the bargain, it appears at times to have bitten off more than the poor old buffalo can chew.

For the most part, Kapri resorts to rather broad strokes in portraying a rural landscape in which no bluff and bluster is beyond those that are well ensconced in positions of authority.

Miss Tanakpur Haazir Ho frequently equates the predicament of exploited humans with that of the four-legged titular creature tethered to a destiny that it has absolutely no control over.

The twenty litres of milk that Miss Tanakpur - the title is contributed by a win the buffalo registers in a contest at an animal fair - is all that matters to the people that own her.

In its forced victimhood, the animal becomes a metaphoric pawn in a grotesque legal battle unleashed by forces that have no interest in its well-being.

Much of Miss Tanakpur Haazir Ho is crude and unsubtle but that isn't wholly without reason.

The film is set in a rustic landscape inhabited by abrasive men who possess the social, political and material power to abuse the legal system at will.

Just about everything is amiss in tension-ridden Tanakpur, beginning with its impotent and unscrupulous headman Sualal Gandaas (Annu Kapoor).

The man's much younger wife, Maya (Hrishitaa Bhatt), is in a dangerous liaison with the village electrician Arjun (Rahul Bagga) and she loses no opportunity to invite him into her bedroom.

Arjun is a morose drifter whose father has put his life's savings aside so that his son can become a policeman.

The mukhiya throws his weight around with the help of a dumb henchman, Bheema (Ravi Kishen), who merrily rushes in where angels would fear to tread.

That is where the buffalo comes in handy. The silent animal falls prey to the headman, his lackeys and police inspector Matang Singh (Om Puri), who is all too willing to be bribed to do the master's bidding.

An ensemble cast of seasoned character actors who know their onions inside out but aren't quite sure of their Haryanvi dictions raises Miss Tanakpur Haazir Ho a few notches above the median.

Recommended with a rider: this certainly isn't time-pass fare.