Mission: Impossible: Your Next Stunt, Should You Choose to Accept It

Rogue Nation is pretty much like most of the Impossible movies 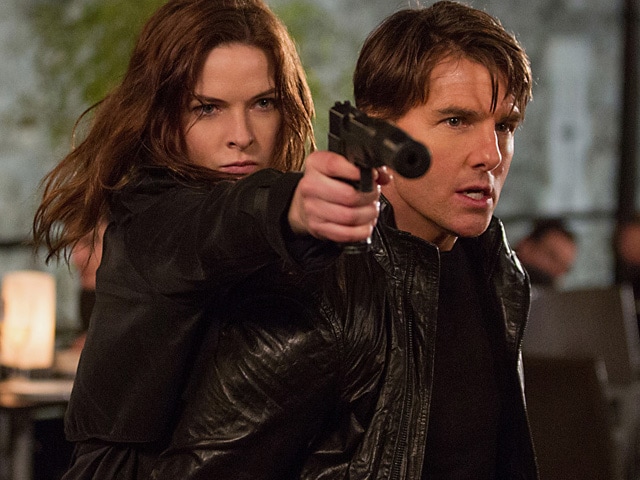 Watching Tom Cruise hurtle through the latest Mission: Impossible, taking one blow after another, you can't help worrying that he won't be able to keep this action stuff up. It looks so hard! But here he is, the 53-year-old Tom Terrific, holding onto a plane as it takes off, defying sense and gravity, and making you wonder (not for the first time) if he would actually die for our pleasure. By the time he's flailing underwater without an oxygen tank, struggling against violent surges as breath and time run out, you can almost feel the life leaving his body.

The first Mission: Impossible movie, a spinoff from the 1960s television show, was released 19 years ago and was, though it's almost hard to believe it now, something of an auteurist event, having been directed by Brian De Palma. Cruise was an established action star by 1996, but he also helped produce the first film, which strengthened his status as an international brand. As a star-auteur, he has always been the most important feature and effect of the series, although it's telling that De Palma oversaw the set-piece that gave the movies their foundational image: Cruise's operative, Ethan Hunt, hovering like a spider (or a puppet) above a luminous white floor while suspended by a very thin rope.

As the clock tick-tocks, and Ethan struggles to keep his cool - a single drop of sweat splashed on the floor would blow the operation - the visual gloss and high-tech gobbledygook, Cruise's graceful athleticism and De Palma's New Hollywood suspense chops flow together, turning the scene into the emblematic Mission: Impossible showstopper. It's the kind of pure cine-spectacle that jolts you before sweeping you up. There's never been a scene in the series as memorable as that one, even if the exploding fish tank, the film's other eye-popper, comes close. These sequences set a high bar both for directors who followed in De Palma's wake and for Cruise's physical performance, which in the later installments has largely involved progressively scarier stunts.

The writer and director of the latest movie - its goofy full title is Mission: Impossible - Rogue Nation - is Christopher McQuarrie, who's been tethered to Cruise for the past decade. They worked together on McQuarrie's adaptation of "Jack Reacher," a grim genre bummer that was a bad fit for Cruise, who can rarely go tough and dark with conviction. McQuarrie also had a hand in writing Edge of Tomorrow, Doug Liman's underloved science-fiction romp that dovetailed with Cruise's strengths, including a too infrequently tapped gift for light comedy. McQuarrie, who made his name with his rebuslike script for The Usual Suspects, tends to work the more lugubrious end of the entertainment spectrum, so it's a nice surprise that "Rogue Nation" isn't just another clenched-jaw blowout.

Sleek and bloated, specific and generic, Rogue Nation is pretty much like most of the Impossible movies in that it's an immense machine that McQuarrie, after tinkering and oiling, has cranked up again and set humming with twists and turns, global trotting and gadgets, a crack supporting cast and a hard-working star. Jeremy Renner, Ving Rhames and Simon Pegg (with his valuable comic timing) are all back, joined by series newcomer Rebecca Ferguson. She plays a super-vixen, the amusingly named Ilsa Faust, who enters with the camera peeking up her skirt and rises like a half-shell Venus, a la the original Bond Girl, Ursula Andress. Even so, Ferguson has more going for her than man-throttling thighs (and an ace stunt double, Lucy Cork); she holds her own both on the ground and in midair.

Cruise looks comfortable with Ferguson, another plus. For most of his action-movie career, he has come across as a less romantically nimble, less self-amused version of Douglas Fairbanks, the swashbuckler who leaped through the silent era. Like Cruise, Fairbanks performed many of his own white-knuckle stunts, as when he climbs up the chain of a closing drawbridge in "Robin Hood." (Fairbanks helped start United Artists, which Cruise owned a piece of for a while.) All too often, Cruise's insistence on doing frightening stunts in the Mission: Impossible series has become its most distinguishing quality. In this movie, though, when he goes airborne like a barnstormer, the scene's self-conscious sense of the absurd suggests he's trying to let his inner Harold Lloyd out to play.

That helps speed up Rogue Nation, which slows down when the plot tangles or some ceremonial manly peacocking ensues, usually from Renner and Cruise. Clearly McQuarrie and his star feel the need to stamp the series with seriousness, something that De Palma knew better than to do. And throughout Rogue Nation," you can sense the filmmakers comfortably, at times awkwardly, playing tug of war with the mood, which grows sinister with the excellent Sean Harris as the regulation evil genius and almost frisky with Alec Baldwin as an intelligence blowhard and Tom Hollander as a political boob. Pegg's second-banana flair is especially crucial here because it helps show that Cruise, whose smile at times seems awfully strained these days, can still take a ribbing as well as a licking.