Watching Finding Fanny is like spending a night in a shack on a beach in Goa, drinking your poison and sharing mad jokes with friends all night 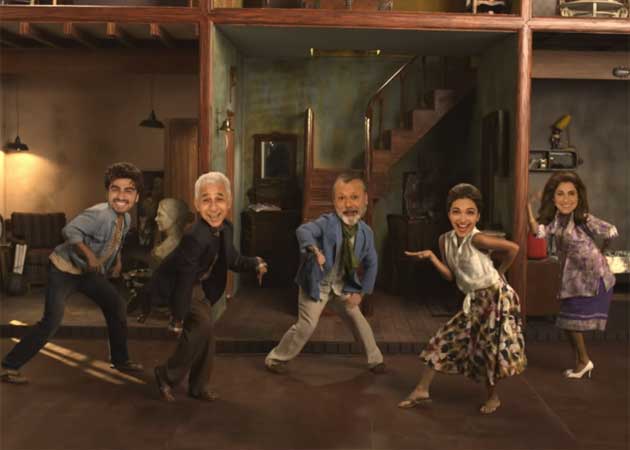 For most part of this film, a bunch of fantastic actors are together in a frame, sitting in a blue beaten car, presumably to find Fanny but largely to give us a delightful dollop of entertainment.

Set in a sleepy village Pocolim tucked somewhere in the interiors of Goa, Finding Fanny lazes and lingers like a cat under the warm sun , as its inhabitants saunter about their unhurried, monotonous days in the most casual manner.

Naseeruddin Shah is Ferdie, the emotional sucker, the trustworthy friend and the man who's lost the only woman he loved. Dimple Kapadia is Rosie, the bossy woman with ample assets, who successfully manages to hide her helplessness and disappointment with life by her stand offish ways. Pankaj Kapur is Don Pedro, an original painter with fake charm. Could you ask for more? Well, giving them company is the gorgeous widow Angie (Deepika Padukone) and the irritable, emotionally drawn out but endearing Savio Da Gama (Arjun Kapoor).

The journey begins after Ferdie finds out that the letter that he had written to Fanny (Anjali Patil) 46 years ago, professing his love to her never really got delivered to her. His best friend Angie wants him to find Fanny. And thus the journey begins which slowly unravels the plot and in the process, revealing the true personalities of the characters involved.

Pankaj Kapur, the brilliant actor that he is, makes the best use of the deliciously wicked lines given to him as he brings polished Pedro to life. But it is Naseer?s timid Ferdie who grows on you slowly and finds a tiny place in your heart. Dimple Kapadia as the feisty Rosie tended to go overboard at places, but is charming nevertheless. Deepika Padukone shines as she plays it cool and casual to suit the mood of the film. Arjun Kapoor, plays his 'boy lost in the woods' character with surprising ease and competence. This is undoubtedly his best performance till date.

Anil Mehta's beautiful cinematography adds to the film. The best thing about this screwball comedy is that Homi Adajania has evidently made it purely for the fun of it and not as a desperate bid to play to the gallery. Imagine spending a night in a shack on a beach in Goa, drinking your poison and sharing mad jokes with friends all night. Watch this one for a slice of that kind of experience.