The technically brilliant visuals and matching performances make the film worth a watch. 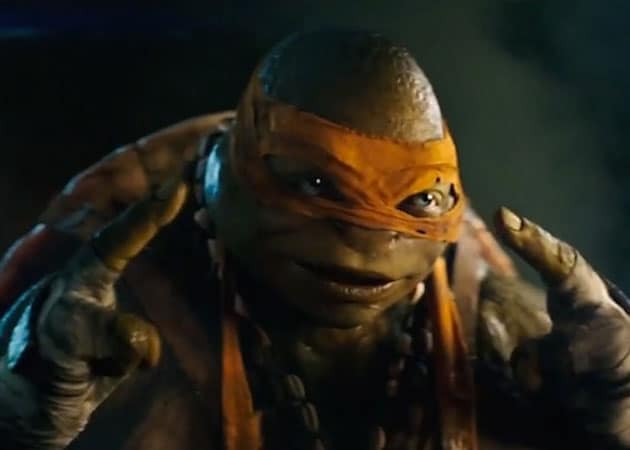 Packed with roller-coaster action, set in New York City, this science-fiction-action-adventure film is a reboot of a Gen-Y franchise that began in 1984 as a comic series, which was later adapted into television shows, video games and films.

This is the fifth film in the series, which is a full recap of the turtles' original story and their epic conflict with the dastardly Foot Clan crime syndicate.

The narration begins with a prologue stating that darkness has settled over New York City as a criminal group called the Foot Clan headed by Shredder (Tohoru Masamune), a samurai, who dons a suit of armour, which basically turns him into Japanese Megatron, is terrorizing the city. And police can't do anything to prevent them.

The story follows April O'Neal, a budding journalist who wants to make a breakthrough with serious stories. Late one night, when she chances upon a group of mysterious vigilant crime fighters, who thrash the Foot Clan thugs, she thinks that this would be the story of her career.

Her colleagues think she is crazy, as she has no proof to substantiate her story.

When she further reveals to her boss Bernadette (Whoopi Goldberg) that the vigilantes have been leaving a mysterious Japanese symbol at the site of the purported crime, she is sacked from her job.

But April continues her investigation, which reveals that the vigilantes attacking the clan goons are a quartet of six-foot-tall, teenage mutated talking turtles with lethal ninja fighting skills. They are named after four Renaissance artists.

Leonardo (Pete Ploszek) in blue is the leader, Raphael (Alan Ritchson) in red is the beefy hothead, Michelangelo (Noel Fisher) in orange is the jovial, wisecracking flirt, and Donatello (Jeremy Howard) in purple is the tech geek.

Since nobody believes her, April turns to her father's ex-colleague and a wealthy industrialist Eric Sachs (William Fichtner) for help.

Meanwhile, the turtles living in the city's sewer system with the sagacious rat known as Splinter (Danny Woodburn), who has trained them in the skills of ninjutsu, making them martial arts experts, realise that it is April who is now in danger.

Soon they take April into confidence, but by then it is too late.

Massive noisy battles ensue. This followed by a chase that involves an 18-wheel trailer skidding over a snowy mountainous terrain.

The action is dramatic, complex and at the same time cartoonish. Humour comes in the form of heavily loaded pop-culture references. Kids would enjoy it.

The climax threat, which has been often seen on screen, lacks punch.

The performance of each actor is perfectly tuned to the character they portray. But unfortunately, the characters designed by scriptwriters Josh Appelbaum, Andre Nemec and Evan Daugherty are shallow and don't have any depth and dynamism.

Director Jonathan Liebesman is brilliant with the technical treatment. Though this is an original story, there are traces of producer Michael Bay's "Transformers" throughout the narrative.

Overall, despite blatant product placements, the technically brilliant visuals and matching performances make the film worth a watch.