MSG - 2: The Messenger is an obnoxiously crafted propaganda film that lacks finesse. 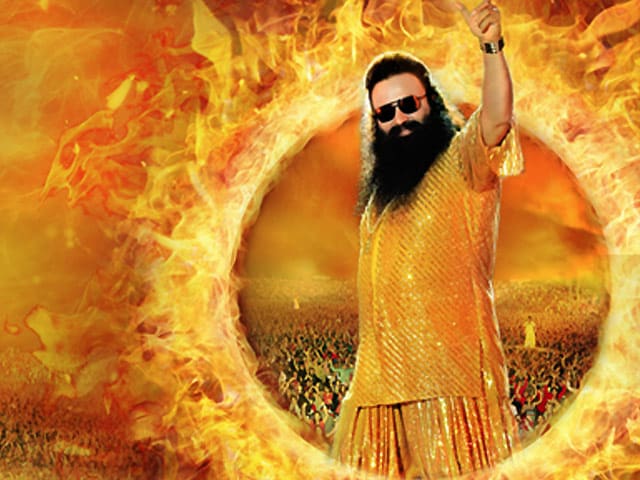 At the very onset, the narration deviously camouflages the saccharine-laced ideologies with a disclaimer in English which clearly mentions, ?This film is a fictitious piece of art and the protagonists don't claim to have any miraculous powers.?

I wonder if the foolish and gullible multitudes watching this film will actually pay attention to this slide?

The narration begins with a tackily-produced action sequence where Gurmeet Ram Rahim Singh rescues two small boys from an inferno. In his own words, "To save a life you need a heart." He has it and he is the messiah.

Addressed as Pitaji - father; Guruji - teacher; and Adi-Guru - supreme teacher; he is in search of the lost souls - to give them solace.

Quoting various religious heads, he assures the audience about the goodness of God, but not before giving an insight into his Shah Satnam Ji Green "S" Welfare Force, a disaster relief and social welfare agency, which provides selfless service to humanity and how they have saved lives in North Eastern India.

There is no story and the narration hinges on a wafer-thin plot, where a corrupt king-pin, who deals in all the possible vices, manipulates the ministry, the police and the army.

The plot designed, sermonises about converting the "asabhya to sabhya" (indecent to decent). It also preaches about the ill-practices of child marriages, human sacrifices, alcoholism, cigarette smoking and meat eating. Though serious, the poorly handled issue inadvertently sounds hilarious.

There is no thought given to the characterization and their graphs. Gurmeet Ram Rahim Singh rules the roost and all others play second fiddle to him.

His messages are interjected with flashy songs, sung by Gurmeet Ram Rahim Singh himself. The songs are tuned to the remixes from the T-Series repertoire. Neither are the songs nor the performances memorable.

On the technical front, with a massive production budget, the sets and costumes are opulent and elaborate. Gurmeet Ram Rahim Singh's crystal, stones and mirror studded ensemble includes a matching headgear, which makes him seem outlandish.

The computer-generated images of the animals like the bull, the elephants, pythons and water buffaloes are a tad tacky.

Overall, this is a highly avoidable film.