MSG is strictly for the faithful 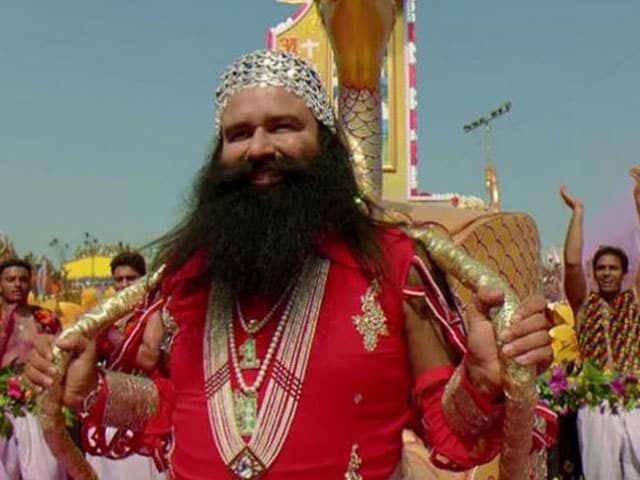 Unbridled messianic zeal is the driving force behind MSG ? The Messenger. The 200-minute film is a one-man show. That one man is a bundle of energy for whom nothing is impossible.

This terribly turgid film is a platform for Dera Sacha Sauda chief Gurmeet Ram Rahim Singh to demonstrate his versatility to his flock. He has written the film, co-directed it with Jeetu Arora and co-produced it.

The spiritual guru is also the composer, lyricist and singer of all the musical numbers MSG is laced with.

The film, mired in controversy, has taken a while to get to the theatres. But it should be out of here in a jiffy because it is unlikely that regular movie fans will be able to digest this all-out assault on the senses.

Everything, yes every little thing, in this monstrosity masquerading as a movie is gratingly loud and crassly colossal. Every single frame reeks of misplaced enthusiasm, and of an imagination run riot.

MSG is the kind of film that has the potential of instantly turning a movie hall into a torture chamber. Be warned: it takes so long to reach the finale that one is ready to collapse with exhaustion after the relentless battering it delivers.

MSG is strictly for the faithful. But for all other movie fans, it is atrocious enough to dent their faith in the power of the medium.

The thrust of the film is never in doubt: when the forces of evil threaten to overrun the world, it is time for a flamboyant saviour to arrive and set things right.

But this omnipotent, omnipresent character, Sant Ram Rahim Singh Insaan, played by the real-life guruji himself, is no ordinary crusader.

He is a crime-buster and a cool customer who can sing, dance and fight.

He is also a rockstar, a rebel, a reformer and a rabble-rouser all rolled into one.

Guruji singlehandedly fights an array of social ills ? alcoholism, drug abuse, prostitution and poverty ? besides administering the healing touch to the ill and needy.

He organizes blood donation camps, gets his hands dirty in conducting cleanliness drives and mounting concerts christened Rubaru Nights, designed a ploy to keep his followers away from the bottle.

In the process, he makes many enemies. But none stands no chance against his righteous might.

He makes his entry on a hot air balloon strumming a guitar all the way down. His mobike can fly and it is his vehicle of choice. But he also drives around in swanky souped-up vehicles.

For good measure, he slips into a new costume (designer: who else but the godman himself?) literally every two minutes.

The outfits the lead actor wears are as colourful and garish as the film itself.

The music redefines the contours of noise in a way that would be way beyond the means of anyone but a man who believes that he is a messenger of god.

Right at the outset, MSG offers a disclaimer asserting that the film is a work of fiction and that it makes no claims of anybody possessing miraculous powers.

But that is obviously a minor formality. Once it is out of the way and the larger-than-life protagonist takes over, the film portrays a string of miracles of the kind that only a cross between The Avengers and Rajini/Salman can pull off.

The greatest surprise that the film throws up is a magical ability to steer clear of any semblance of logic. But in this regard it is no worse than a lot of Bollywood potboilers.
But there is something so laughably inept about MSG that it is impossible to place it any comprehensible category of incompetence.

As the hero prances around, singing, dancing, fighting and pontificating with gay abandon, you can only croon, along with Gurmeet Ram Rahim Singh, ?Never ever?.

This reviewer is still reeling from the repeated knocks on the head that MSG delivers and is in no position mentally or emotionally to decide whether the film deserves to be rated at all for something as inconsequential as cinematic quality.

Who are we anyways to dole out stars to the messenger of god? So, let us leave it to his acolytes to make whatever they want to make of this unending advertisement for the daredevilry of the hirsute, hell-raising angel who heads the Dera Sacha Sauda.

Thank your stars if you manage to survive this ordeal with all your faculties in one piece. But why would you take the risk in the first place?