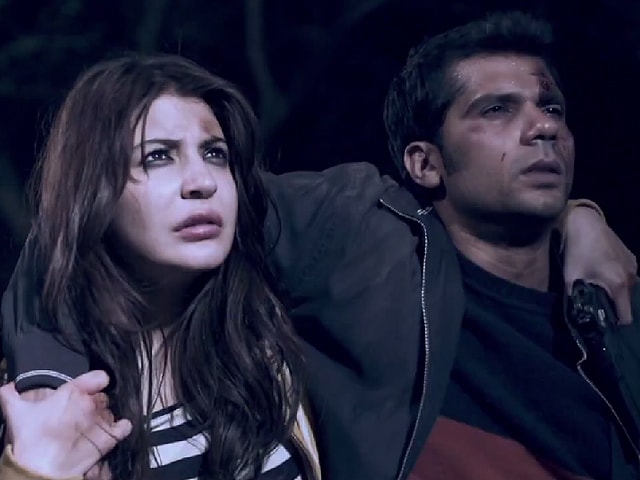 A taut and riveting thriller, NH10 paints a disturbing portrait of an inherently violent village on the edge of a glittering boomtown.

Director Navdeep Singh employs deftly minimalist and consistently effective touches to create a crackling, tension-filled on-screen atmosphere that could shake the toughest of souls out of their complacent stupor.

NH10 is not half as complex and multi-layered as Singh's critically lauded debut film Manorama Six Feet Under, released nearly eight years ago.

It is, in fact, a touch simplistic in its depiction of the social and economic chasm between the two Indias that exist cheek-by-jowl across large swathes of the country.

But what the film lacks by way of depth of vision is largely offset by the strength of its frill-less and focussed storytelling.

The sinewy narrative is gritty, gripping and grinding. Dialogue is sparse, the editing is crisp, and the cinematography is of the finest order.

Some of the violence in NH10 is gut-wrenchingly gruesome, but much of it mercifully stays off camera.

NH10 centres on an innocuous road trip that turns into a nightmare for a well-heeled Gurgaon couple.

As the two ride deeper and deeper into trouble, the film ventures into a dystopia where human life is of little value.

This is a landscape where might is right, and women are disposable commodities that are completely subservient to brutal societal diktats.

This belt is within shouting distance of the swanky office blocks and the luxury residential high-rises that dot the NCR skyline, but utter lawlessness, senseless criminality, police apathy and honour killings are rampant here.

As one creepily cynical character points out without batting an eyelid, democracy and the Indian Constitution have no currency beyond where "the last mall of Gurgaon ends".

The screenplay (by Sudip Sharma, who is also the dialogue writer) is woven around only a handful of characters. Not all of them are equally well etched out.

Especially unconvincing is the carefree husband, who thinks nothing of exposing himself and his wife to danger simply because his ego has been hurt by a criminal. And to think of it, he repeatedly claims to be friends with a senior Delhi police officer.

The focus of NH10 is primarily on the harried figure that is fleshed out by co-producer and lead actress Anushka Sharma.

She bears the burden rather well, conveying a range of moods as she moves from the vulnerable to the fearless in a battle in which the odds are stacked heavily against her.

Here, darkness hangs around the bright lights of a seemingly thriving but dangerous city, and the director wastes no time to get to the point.

As the film opens, the razzle-dazzle of a glitzy Gurgaon night floats dreamily across the screen.

Over the flickering neon flashes, the voices of Meera (Anushka Sharma) and Arjun (Neil Bhoopalam) waft through the windshield of an off-screen SUV.

The two are talking about a party that they are headed to but are not very keen to attend. But they do drop by.

An office emergency compels Meera to leave the bash halfway through. On the way, she is waylaid by a bunch of hoodlums. She escapes by the skin of her teeth.

Panic-stricken, the couple applies for a gun for self defence. And to get Meera's mind off the harrowing incident, Arjun promises to make up to his wife for a skipped honeymoon with a romantic birthday getaway.

The much in love couple drive right into a violent fracas at a highway dhaba.

A young village girl and her husband are dragged into a vehicle by her violent brother (Darshan Kumaar). Arjun jumps in to play saviour.

His bravado backfires and their trip careens out of control.

The film, however, holds its path right down to the shocking final moments.

NH10 is an adventurous Bollywood film that breaks the shackles of convention and is none the worse for it. Eminently watchable.