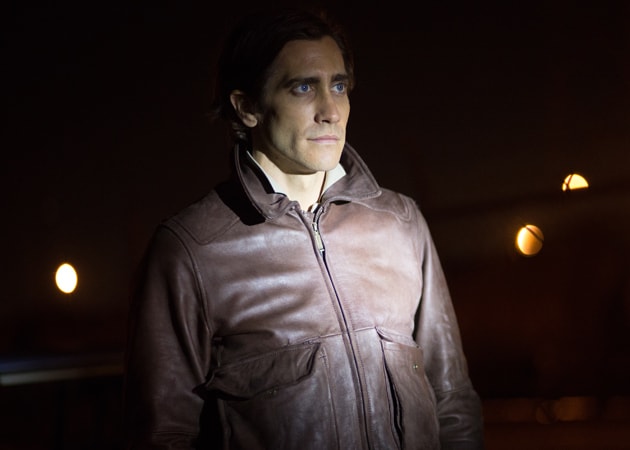 The most frightening thing about Jake Gyllenhaal in Nightcrawler - even more than those sallow, sunken cheeks, those googly eyes, and that unkempt hair tied into a greasy bun - is his smile.


They invented the word "creepy" for that smile, a goofy, confident grin that reaches its full breadth just when you're starting to realize how deranged this guy really is.


Jake's bold, committed performance makes Nightcrawler one of the most entertaining movies of the year - though hardly the most profound. The film seeks to convey the seaminess of local TV news, summed up by the phrase "If it bleeds, it leads." The thing is: We already knew this. And frankly, there are so many disturbing things going on in the world right now that it's hard to get too worked up about it.


But that doesn't mean that Nightcrawler - think "Network," transformed into a taut action film - isn't a compelling and altogether impressive directorial debut for screenwriter Dan Gilroy (The Bourne Legacy). Dan starts slowly, then ups the pace until we're truly breathless by the culmination of the final action scene. It's a doozy, gorgeously handled by cinematographer Robert Elswit, who makes nighttime Los Angeles a simultaneously chilling and beautiful place.


Jake plays Lou Bloom, a forlorn petty thief when we first meet him, who scours desolate places like construction sites - deep in the night - to rip off barbed wire and manhole covers, then sell them for cash. But soon, on his nocturnal travels, Lou discovers the "nightcrawlers" - freelance cameramen who follow police scanner traffic to grisly scenes.


Transfixed, he sells his bike to buy a scanner and cheap camera, and he's off. At first he's lost, filming mundane things like someone taking a breathalizer test. But soon, he gets the point.


Acquiring explicit footage one night of a gasping carjack victim, Lou takes it to KWLA, where Nina (the ever-appealing Rene Russo), news director on the graveyard shift, knows she's found a great source of sleaze for her low-rated broadcast. Explaining her ethos after they make their first deal, she tells Lou the best footage he could ever bring her would be "a screaming woman running down the street with her throat slit."


Gradually Lou's camerawork gets better, and he gets bolder. At the scene of a home invasion, he enters through an unmanned door, then rearranges family photos on the fridge for a better shot. Is there any question that soon, he'll be rearranging a corpse?

Slowly, the scope of Lou's bald ambition becomes apparent. Dan, who also wrote the screenplay, is smart not to rush this. At first, Lou's self-improvement mumbo jumbo - he's formed a "business plan" based on inspirational stuff he's found online - is funny. Soon, it's not.


Of course, other people are merely pawns in Lou's managerial scheme. Those doomed to suffer include Joe (Bill Paxton), a Nightcrawler who stands in Lou's way at his peril, and Rick (an excellent Riz Ahmed), a drifter whom Lou "hires" to become his navigator-assistant. Their "job interview" in a diner is the film's funniest scene. Asked the salary, Lou replies: "It's an internship."


And what's the scariest scene? That one actually involves no blood. It's the moment Lou explains to Nina just the price she'll have to pay to keep his services. It involves much more than money. Brrrr. The mere thought makes the blood run cold.


It's not too long, of course, before the ante has risen so high, Lou becomes not just the guy who gets to the scene first, but the guy who sets up the crime. The film suggests that it's our own bottomless desire for blood, every night at 6 and 11, that creates this monster.


Maybe. But the character Jake and Dan have created is monstrous enough. Pass the popcorn.


Nightcrawler an Open Road Films release, is rated R by the Motion Picture Association of America "for violence including graphic images, and for language."