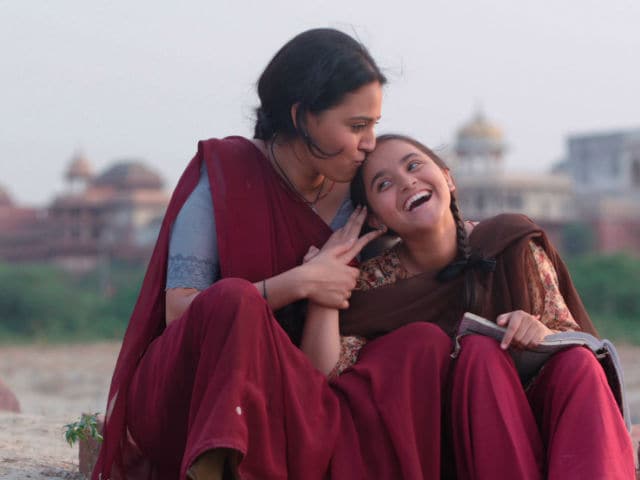 A disarmingly simple and heart-warming film that articulates its message without making a song and dance about it, Nil Battey Sannata is a fine achievement.

It shines a light on a segment of society where life is a daily grind and where the smallest dreams face the most daunting obstacles.

Nil Battey Sannata mines the life of Chanda (Swara Bhaskar), a single mother who does menial jobs all day just in order to give her teenaged daughter Apeksha (Riya Shukla) the education that might help her break the shackles of poverty and privation.

It does not resort to scenes of high drama nor does it get its characters to deliver any stately soliloquies of intent.

Yet it builds up the mother-daughter relationship gently and sensitively to a finely-tuned, emotionally affecting crescendo.

Barring a scene here and a scene there in which Apeksha and her friends teeter on the edge of the overly precocious, there is little in Nil Battey Sannata that strikes a false note.

Apeksha, a spirited and fun-loving girl who has trouble getting up in time for school, is a classroom laggard completely at sea with mathematics.

Her mother, egged on by the lady doctor (Ratna Pathak Shah) at whose home she works as a maid as well as the math teacher and school headmaster (Pankaj Tripathi), decides to take matters in her own hands to help her daughter alter her approach to the subject.

While its focus is principally on a domestic help who dreams of a better life for her daughter, debutante Ashwiny Iyer Tiwari's film spreads the narrative net wide enough to provide a big picture view of the social dynamics at play here.

Chanda is a school dropout herself - her absent husband is mentioned a couple of times but what has happened to him is left unstated. She has an acute of appreciation of the pain of dreams left unfulfilled.

She therefore does not want the same fate to befall her daughter, but the latter resents her mother's constant nagging and inches dangerously close to outright rebellion.

In an unusual narrative twist, Nil Battey Sannata pits the mother against the daughter not just in their modest tenement but also in the classroom.

Chanda's relationship with her daughter is rather choppy because the latter is outright sceptical of her mother's grand plans for her.

Apeksha's question to her mother is pointed and repeated: "Do you even have the means to educate me beyond high school?"

In this battle of attrition between a strong-willed mother and an adamant daughter, math serves as an apt metaphor for the challenges that the duo is up against as they struggle to weave their way out of their misery.

They are helped enormously by one student in Apeksha's class who is exceptionally bright and does not merely understand mathematics, he enjoys it.

This boy, too, has a back story (it is revealed right at the end of the film) that puts the main narrative in perspective while showing the diffident girl the way out of the tunnel that she is lost in.

Nil Battey Sannata has some moments that are achingly sweet, and others that are genuinely moving. They make for an engaging drama.

The acting is first-rate and perfectly in sync with the demands of the script.

Although hard pressed at times to disguise the sophistication inherent in her body language, Swara Bhaskar presents a striking portrait of tenacity.

She gives all that she has to the character of the weather-beaten but hard-working woman who will stop at nothing in the pursuit of her dreams.

Child actor Riya Shukla, as the girl forced by circumstances to adopt cynicism as a defence mechanism, demonstrates impressive maturity in fleshing out a character that evokes deep empathy.

Pankaj Tripathi is absolutely scintillating - yes, that is the word for him - as the highly motivated math teacher who teases and coaxes and mocks his students in order to draw them out of their aversion to the subject. It is a spectacle to behold.

Nil Battey Sannata is easy to recommend. It is light-hearted, easy on the eyes and mind, and full of heart.

This film says a great deal about a girl-child's struggles, a mother's hopes and the ways of the education system. But, in the end, Nil Battey Sannata is also a good old story about life and its vicissitudes.