Honestly, P Se PM Tak is a weak satire that does not impress 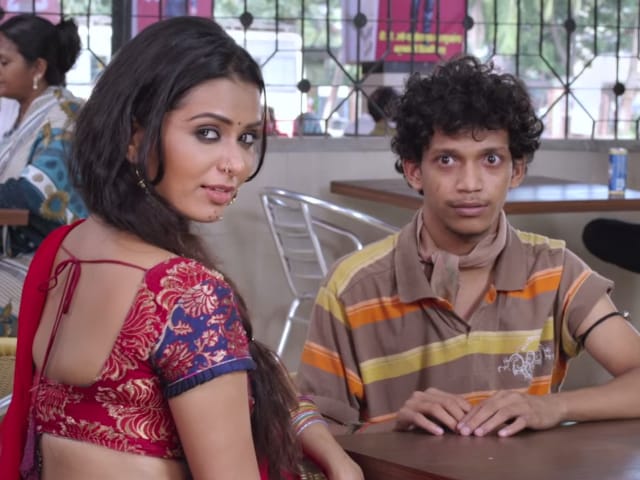 With a title like P Se PM Tak, the end is predictable and a foregone conclusion. It is the journey that you think will be exciting and you wait with bated breath for the tale to unfold. But alas, it does not.

A political satire, it is the story of a prostitute Kasturi, who lands in Satara and finds herself drawn into the closed circle of the town's ruling elite, and her meteoric rise to the coveted political position.

The film belongs to Meenakshi Dixit. She makes an impressive debut essaying Kasturi with aplomb. She has a whole gamut of emotions to display and she does not falter. She is loud, crass and dim-witted, her character longs for true love.

It is also amusing when the traffic signal is used as a metaphor and she mouths this statement many a time - "Humari kismet, gol gol ghoomkar, red light par attakti hai."

She is paired opposite Indrajeet Soni, who portrays the role of the unscrupulous Inspector Rajan Gorpade, who is in love with Rashmi the niece of the Kingmaker, Waman Saheb.

Indrajeet lacks a strong screen presence. He emotes the romantic scenes well, but is perfunctory as a political manipulator. Prerna Wanvari, with her limited screen time as Rashmi, is passable. With her stiff gait and absence of screen energy, she lacks the oomph factor.

The character who steals the show with his buffoonery and blase histrionics is Bharat Jadhav, who plays Waman Saheb. With a prosthetic upper jaw and obnoxious behaviour, he stands out among the rest of the cast. He is a character actor who could easily slip into Sadashiv Amrapurkar's mould.

Anjan Srivastav, one of Kundan Shah's favourite actors, has a chunky role as DD, one of Waman Saheb's lackey. He is his usual self and does not bring anything exciting to the table. So is Yashpal Sharma, who plays the vacillating politician, Jadeja. It is the power-packed, Upasana Singh, who is wasted here as Anuradha, the head of an NGO.

The film lacks lustre in terms of narration and treatment. The director seems to have lost his zing and is stuck in an era that's gone by. Coming from director Kundan Shah's stable, this film is a huge let-down, especially with over-the-top acting, ridiculously stretched scenes and insane low-IQ dialogues and motives.

The first half of the film moves on an interesting pace and then loses its momentum and goal during the second half. Also, the look and feel of this film is of the early 1990s.

Of the numerous songs, it is only "Haiyo Rabba, mera dil nahi lagda", that is hummable and well-picturised.

Humour is in the form of slapstick comedy, sci-fiction robotic technology that could put superstar Rajnikanth to shame and rhyming dialogues that lack punch.

What impedes the smooth, uninterrupted viewing is the constant bleeps in the dialogues, imposed by the censor board of the country. Apart from this, the writers have been innovative in introducing new cuss words like "lafange, luchhe, darpok, eena meena deekaa"... whatever they are supposed to mean.

Honestly, P Se PM Tak is a weak satire that does not impress.