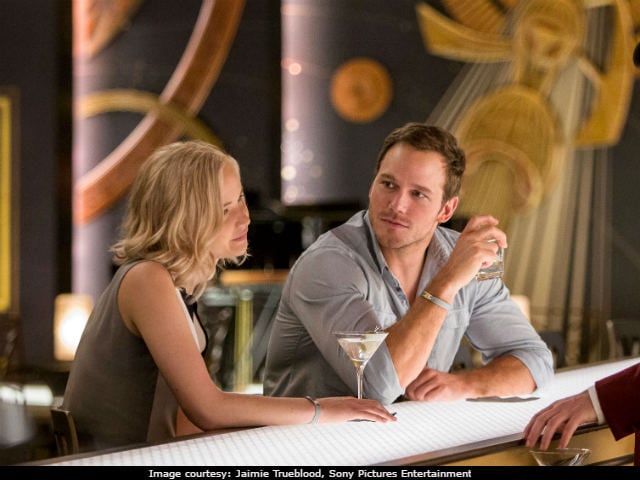 In Passengers, Chris Pratt plays a man who, while in suspended animation during a 120-year commercial space mission to a faraway colony planet, is mistakenly awakened mid-trip. Adrift and alone in a massive floating super-mall - tricked out with a basketball court, Japanese and Mexican restaurants and an elegant bar staffed by an obliging, crimson-jacketed droid - Pratt's character faces the existential challenge of living out his days in solitude, dying long before his 5,000 fellow travelers reach their destination.

Meanwhile, viewers face a challenge of their own in accepting a movie that feels alternately dreary and patently derivative, culminating in over-plotted set pieces, a conveniently jammed-in narrative device and a final image that beggars belief, patience and goodwill.

Film fans will immediately detect a nod to The Shining in the bar sequences, which possess the same echoing sense of dislocation and weirdness. Director Morten Tyldum, working from a script by Jon Spaihts, doesn't push the sci-fi genre forward as much as quote some of its greatest hits, from 2001: A Space Odyssey to Moon, Gravity and The Martian and Ridley Scott's Prometheus, which Spaihts also wrote.

The most original and intriguing element of Passengers turns out to be its most troubling, which is how a passenger named Aurora, played by Jennifer Lawrence, comes to figure in the story. Going into detail about that development wouldn't be sporting, but it's safe to say that, like the recent film Collateral Beauty, the plot of Passengers hinges on a morally dubious act that the filmmakers gloss over in a series of creepy justifications and a sudden third-act reversal.

Although Pratt doesn't make much of an impact as the generically square-jawed Everyman hero, Lawrence exerts her usual magnetism in Passengers, her hair coifed into a meticulously messed-up platinum-blonde bob and her athletic frame slipping easily into a series of gorgeous minimalist outfits. Although Spaihts's script doesn't allow for much expressive range, she's able, in one or two scenes, to infuse real warmth and feisty humor into an otherwise sterile, somewhat dreary setup. That makes it all the more disappointing when her gutsy spirit turns to mush late in the proceedings.

Visually, Passengers is attractive, if not terribly imaginative: Dominated by shades of white, chrome and gray, the production design is most memorable when Aurora does her daily laps in the coolest swimming pool in the known universe. Tyldum, best known for directing The Imitation Game, isn't a dynamic stylist as much as a competent executor of what's on the page. He gets Passengers to where it needs to go, which is a resolution in keeping with a movie that wants to have its cake and eat it too, no matter how much credibility it strains, or how many political and ethical quandaries it elides.