Pink is an evocative film about women 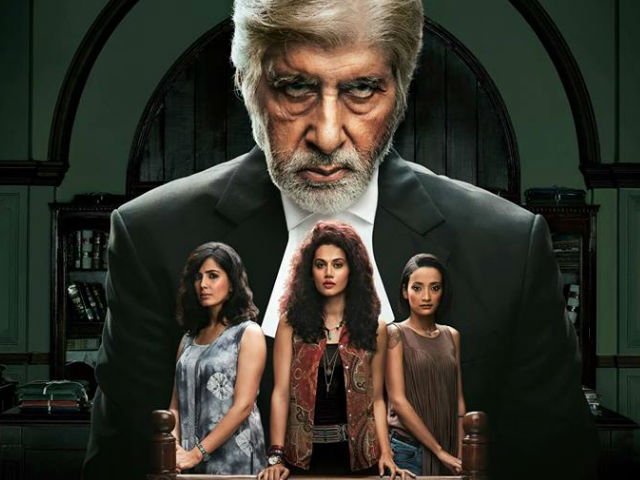 Pink is a contemporary youth-centric film with a strong socially relevant message about the choices young women of today make and about respecting those.

Narrated in a linear manner, the simplistically presented film, essentially a courtroom drama, is powerful, owing to its missive, dialogues and performances.

Three young working women, Minal (Tapasee Pannu), Falak (Kirti Kulhari) and Andrea (Andrea Tairang) are flatmates in Delhi and good friends. An untoward incident one night at a resort in Surajkund, involving some boys, among whom is Rajveer (Angad Bedi), who comes from a politically well-connected family, proves to be life changing for the trio.

What follows is an intriguing courtroom drama where ace lawyer Deepak Sehgall represents them in a bid to get them justice.

Replete with contemporary instances and issues, centering around women and their safety, the film, through its potent dialogues, takes a dig at society and its stereotypical norms and prejudices towards women, as in "The Rule Book of the Girls' Safety Manual", enumerated by lawyer Deepak Sehgall.

Director Aniruddha Roy Chowdhury extracts natural performances from all his actors, and makes a meaningful film devoid of any unnecessary commercial trappings, never once deviating from the core theme.

Amitabh Bachchan as Deepak Sehgall, the aged defence lawyer, shines as always, in a restrained, but powerful performance. His histrionics come primarily in the form of his well-modulated baritone, conveying his emotions and of course, from the well-written lines.

Taapasee Pannu, as the protagonist Minal Arora plays the brave, present-day Delhi girl with convivial ease. She delivers a power-packed performance, naturally, slipping into her character bringing out the contrast as a strong yet vulnerable girl. Her anxiety, frustrations and angst, against society and the system and its hypocrisy, are all palpable.

Kirti Kulhari as Falak Ali, is equally a powerhouse as a performer. She renders her character of a modern working girl annoyed with the double standards of society, in a convincing manner. The scene in the courtroom, where she breaks down, in particularly laudable.

Andrea Tairang, playing the girl from the northeast is natural, and lives her character with sincerity.


Andrea Tairang in a still from Pink

Piyush Mishra as Prashant, the prosecution lawyer, is brilliant, as he succeeds in the audience despising him for his scathing remarks against women and the societal norms they must conform to.

Angad Bedi as Rajveer, the spoilt rich son of a politician, makes the most of his limited screen time. He is intense, becomes the character he is essaying and delivers a credible performance.


Angad Bedi in a still from Pink

The rest of the cast too, comprising the kind-hearted landlord, the lady police officer, the three friends of Rajveer, support the main actors with their strong performances.

The strength of the film, apart from its great performances, are its taut screenplay and dialogues. Flavoured with a language that the youth of today will relate to, the dialogues are hard-hitting and strike a chord immediately, as they are packed with relevant messages. Humour comes in the form of the satirical dialogues, and lightens the tenor of the otherwise intense film.

The only song in the film, Kaari Kaari Raina, is used effectively to encapsulate the mood and messages in the film.

Overall, Pink is an evocative film about women, brimming with messages relevant for society, and keeps you riveted to the screen.