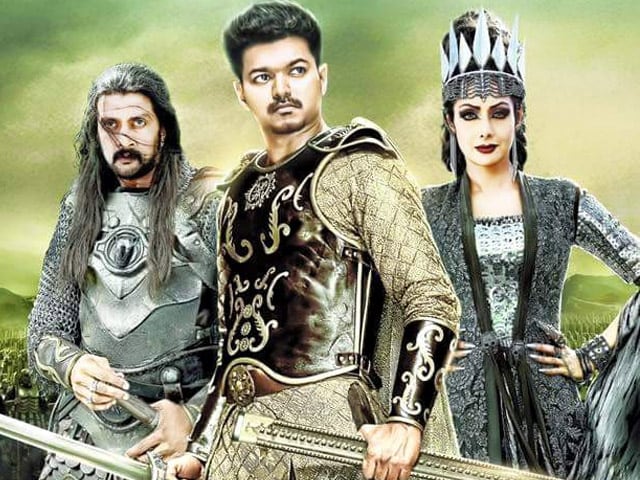 It could be argued by some that a fantasy epic is by definition infantile and it should, therefore, be treated purely as a fun outing.

But even if one were accept that line of thinking and allow the film some leeway, Puli, directed by Chimbu Deven, is unconscionably puerile.

The paucity of depth and genuine originality robs it of any possibility of being regarded as a success.

Puli has numerous quirky creatures, including a talking bird, a wise tortoise, a shiny green frog with an uncanny sense of direction and an entire clan of invisible midgets straight from the isle of Lilliput.

At one point, the dwarves capture the hero and tie up him up a la Gulliver only to realise that he is harmless.

No sooner is he set free than he breaks into song and dance with his erstwhile captors.

The size of the midgets in relation to the protagonist fluctuates all through the number but nobody seems to care. This is a fantasy after all!

Much of the action in the second half of Puli - this is the only passage of the film that is somewhat watchable - takes place on the CGI-generated grounds of a garish palace.

The structure is complete with ornate thrones, watch towers, sprawling arenas for duels, and dark, dank garrets to hold prisoners.

Comparisons with Baahubali are inevitable, but the Rajamouli film, for all its own share of flaws, was infinitely better mounted, told a more engaging story, and had much beefier actors.

In Puli, too, the hero is a foundling who floats down a river into a village. The boy is promptly adopted by the chieftain.

In another scene, having acquired superhuman strength thanks to a magic potion yielded by rare plants and herbs, he lifts a boulder and carries it in his arms.

But neither the pivotal character nor the film is a patch on Baahubali.

The visual effects in Puli fluctuate from the very impressive to the outright tacky. Some of the backdrops look like static scenes in shoddily printed calendars.

The story progresses largely in fits and starts, with too many songs slowing the pace of the film.

In the first half, the hero uses all his spare time to woo his childhood love (Shruti Haasan). Not that it takes much effort for her to melt.

In the second, he sings and dances with a buxom princess (Hansika Motwani) while the girl he really loves awaits the fate of a sacrificial lamb.

Vijay, who plays the invincible protagonist in Puli, is far too boyish for the job of a comic-strip superhero.

He lacks the look and the physique to be convincing when he takes on an army of sword-wielding marauders.

That apart, Vijay isn't much of an actor. Neither his face nor his eyes express emotions. Watching him is a bit like being before a mannequin in a shop window.

In the make-believe world that Chimbu Deven conjures up, Sridevi (making a highly anticipated comeback to Tamil cinema) is an evil queen with magical powers.

She belongs to a breed of people of people that have blue eyes and Dracula-like fangs that bare themselves when they are enraged.

They are endowed with great strength and can walk through fire without going up in flames.

This queen, Yaman Rani, unleashes a reign of terror on the hapless villages that she rules with the help of her brutal general (Sudeep).

The hero, who lives in one of these terrorized villages swings into action when his newly-married wife (Shruti Haasan) is abducted by the evil race.

The overly bright colour palette prevents the film from capturing visual nuances and letting them imbue the tale.

If Puli is really meant for younger audiences - or at least for audiences that are young at heart - it should have gone easier on the violence and the skin show. There is an excess of both.

Early in the film, a man has his arm chopped off. A little later, a girl's throat is slit. And all through the rest of the film, bodies are impaled with impunity.

The Hindi dialogue and the dubbing are stilted. It is disorienting in a film set in an indeterminate and distant past to hear a character compare poetry to the way Gujarati, Marathi and Tamil women wear their saris. Neither than the analogy nor the historiography work.

But that is only one of the many things that are not quite in order in this ambitious but hugely flawed film. Puli lacks the imagination or the heft to carry the weight of its flight of fancy.

The only weight visible in the film is around the midriffs of the swaying heroines. The rest is all dreary fluff.

Puli gets two stars for ambition and scale, but none for execution.