This is not the tragic Aarushi Talwar murder revisited 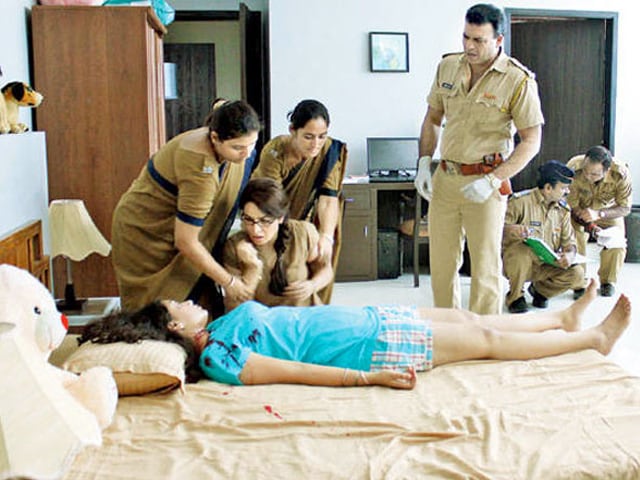 Half of the star-rating extra for the sheer abundance of acting talent that Manish Gupta's stylish confidently-shot whodunit throws forward, with Kay Kay Menon helming the murder mystery as an walnut-chomping CBI officer on the trail of the murder of a young girl, who is killed in her swanky home while her doctor-father was drunk in the next room.

No no no...don't go away! This is not the tragic Aarushi Talwar murder revisited and sensationalised on celluloid. Director Manish Gupta, who has earlier made a strong but crude film on ragging, Hostel, keeps the proceedings on an even keel. Taking the Talwar tragedy as a take-off point, writer-director Gupta has woven an intricate whodunit with enough twists and turns to keep us guessing about the murderer's identity till the very end.

The killer's identity, when revealed, is not entirely unexpected but nonetheless shocking and more importantly, convincing.

Whodunits in Bollywood frequently flounder in their end-game. Not Rahasya. Gupta keeps the narrative going in a steady flow and at a perky pace. The shots are cut deftly. Editor Suresh Pai gives the wide array of characters ample room to breathe but never allows them to overstay their welcome.

This suspense here largely depends on the efficacy of the actors. And here's where Rahasya really scores. Kay Kay Menon as the wry investigative officer fighting off his wife's persistent demands to get corrupt, brings a tremendous engagingess to his character. His character Sunil Paraskar is a man who survives the hardships of a thankless job by cracking cruel jokes about himself and others.

There is a sequence where a character subtly tries to offer monetary gratification to Paraskar.

"You aren't trying to bribe me by any chance are you," Kay Kay's eyebrows arch menacingly. When the temptation is hurriedly pulled back, he growls: "Ah, a miscommunication."

Such moments of delectable humour should have been present more frequently. Largely, Rahasya opts for an exaggerated ambience, mood and treatment. The background music by Ranjit Barot is excellently subdued, more suggestive than illustrative. But the actors' voices are over-dubbed and over-punctuated.

Particularly grating on the nervous system is that wonderful actress Ashwini Kalsekar, who as the dead girl's nanny, whines, sobs, moans and wails almost throughout the film.

We almost wish for one more murder to happen.

But the actors nonetheless save the day. Besides Kay Kay, who is spectacularly subtle, Tisca Chopra as the dead girl's mother and a new actor Nimai Bali as a corruptible cop, emerge triumphant. Mita Vashisht as a smouldering mysterious television actress in backless cholis attempts to be what was once described as the femme fatale. Given her choice of lover for the film, Ms Vashisht ends up as all smoke with no fire.

Admirably, the director shoots Mumbai's underbelly -- the chawls, narrow lanes, toilets and local trains -- with great affection. Faroukh Mistry's camera roams the city restlessly. The long shots of the city waking from uneasy slumber every morning merge into the microscopic view of the traumatised family.

This is a dark, desperate, sinister, gutsy and gripping thriller which may not tilt you to the edge of the seat. But you do want to know who killed the teenaged girl Ayesha Mahajan.

The answer won't please you for sure.

Messy lives, sordid relationships, betrayal and revenge run through the veins of the film. Barbara Cartland would have frowned. But Agatha Christie would have assuredly approved.