The author himself pops up in a cameo, effectively giving his blessing with his presence, but truth be told, if he had proceeded to leap off the screen, I wouldn 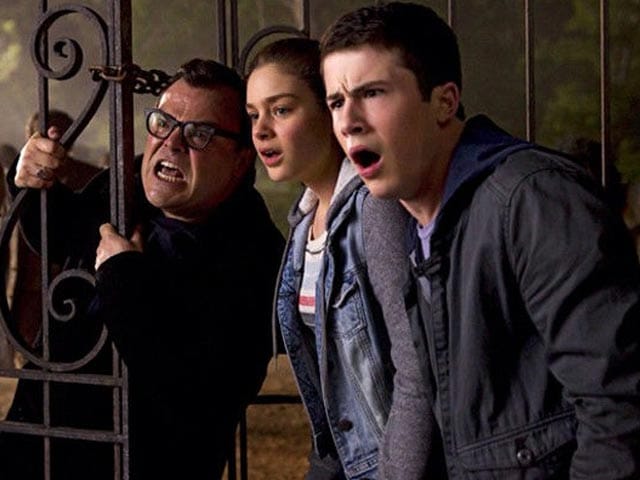 With hundreds of millions of copies floating around in the world, the Goosebumps series abounds with fodder for a big-screen adaptation, so it?s a wonder that all of those books haven?t spontaneously generated a movie by now (in addition to the 1990s TV show). Maybe the makers of the new feature film based on the books by R.L. Stine were thinking along the same lines, because Goosebumps the movie takes quite literally the notion of the power of fiction to come alive. (Not to mention the power of novelists to be cranky loners.)

Stine is an actual character in Rob Letterman?s bells-and-whistles movie, portrayed by Jack Black as the curmudgeonly neighbor of a new family in a small Maryland town. In the simple story, Stine?s home library houses the zany titles that have been devoured by readers 8 and over, from The Abominable Snowman of Pasadena to Night of the Living Dummy ? but with one crucial difference. Each volume can release an actual snowman, or gnome horde, or evil dummy, like a genie let out of a bottle, or, taken all together, like Pandora?s box.

A teenager, Zack (Dylan Minnette), is the one unlucky enough to discover Stine?s secret after befriending the writer?s daughter, Hannah (Odeya Rush). The two have a sweet flirtation, but the bulk of this movie is a jam-packed pop-up book in the form of computer-generated imagery. Zack and his dorky sidekick Champ (Ryan Lee) inadvertently unleash Slappy the Dummy, who in turn sets loose his fellow fictive hordes, and Goosebumps becomes your standard kids cavalcade.

Letterman and the writer Darren Lemke address the tough choices of adapting the classic Scholastic grade-school series by selecting ?all of the above.? The Snowman, the Werewolf, the Lawn Gnomes and other Stine stalwarts turn up to torment Zack and company, who are joined by the persnickety author. As far as fidelity to the genial frights of the books, Slappy?s relentlessness is slightly menacing, as is the slobbering Werewolf, but the action all feels more squealy than scary for children, leavened by a steady flow of gentle sarcasm.

The most genuinely creepy aspect of the story might be Stine?s temper, introduced through his fiercely protective treatment of Hannah. All those monsters had to come from somewhere, after all, and when Black recites a backstory about inventing them to shield himself from bullies, a dark place opens up for a moment before being lost in the colorful CGI avalanche. But any heart-baring emotion in the film is mostly roped off in stilted scenes in Lemke?s screenplay. (Sample line: ?I?ve been running away my whole life.?)

The movie has to keep reminding itself that there are other people in the setlike town. That includes everyone in Zach?s high school, which is hosting a dance and soon faces its own assault. Zach?s mom is an assistant principal (Amy Ryan, variably interested in being in this movie), and she has a goofily uncool sister (Jillian Bell) who falls for Stine, here a single father. There are a couple of dopey cops, but mostly the crew is running from one monster or another wreaking havoc.

In a past life, the Goosebumps adaptation was attached to Tim Burton, and while that has long since ceased to be a fate you wish on a screenplay without reservations, a certain lunacy and excess are missing from much of Letterman?s realization. Not that there aren?t at least a couple of swell set pieces that go beyond frenzy: Zack and Hannah?s enchanting ride on a Ferris wheel in a forest before the onslaught has begun, and the kids? slippery faceoff with the Snowman in the center of an ice rink, straight out of some sweat-stained nightmare.

But more often than not, Letterman uses his movie as a toy chest of characters more than as a medium, the muggy Black included. Rush has an easy warmth, though it?s hard for anyone to stand out, and a plot twist renders her character somewhat problematic as a strong heroine.

Still, Goosebumps would seem to yield the serial pleasures a voracious Stineophile might desire. The author himself pops up in a cameo, effectively giving his blessing with his presence, but truth be told, if he had proceeded to leap off the screen, I wouldn?t have the guts to confess that I was always more of a ?Choose Your Own Adventure? fatalist.