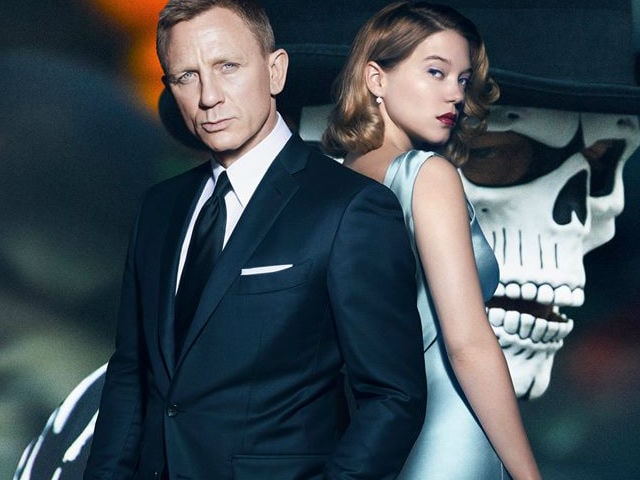 Does it mean something that James Bond drinks a dirty martini in SPECTRE, the latest in the seemingly unkillable franchise? It?s too soon to know, though true Bondologists will be parsing this new drink?s significance shortly. As more of an amateur in all-things Bond, I had hoped a dirty bomb would go boom or that the actress Lea Seydoux would do something unspeakable to Daniel Craig, given that the pre-credit sequence features female nudes writhing alongside an octopus with busy arms. Part of the bankable pleasure of the series, after all, is that every so often, among the usual guns and girls, the unexpected happens ? a bikini stops the film, a villain revs it up, Bond surprises.

There?s nothing surprising in SPECTRE, the 24th ?official? title in the series, which is presumably as planned. Much as the perfect is the enemy of good, originality is often the enemy of the global box office. And so, for the fourth time, Craig has suited up to play the British spy who?s saving the world one kill at a time, with Sam Mendes occupying the director?s chair for a second turn. They?re a reasonable fit, although their joint seriousness has started to feel more reflexive than honest, especially because every Bond movie inevitably shakes off ambition to get down to the blockbuster business of hurling everything ? bodies, bullets, fireballs, debris, money ? at the screen.

Before that happens here, there?s the usual narrative busywork that plays as if it were written by committee, which it was (John Logan, Neal Purvis, Robert Wade and Jez Butterworth). If you have watched one Bond movie, you know the score. The band ? M (Ralph Fiennes), Moneypenny (Naomie Harris) and Q (Ben Whishaw) ? gets back together, with Bond singing lead. There?s an opening lollapalooza blowout that Mendes largely delivers in one long silky take, having clearly studied trends in contemporary art cinema. Craig and the camera move together beautifully in this sequence, whether Bond?s sauntering across a roof (and in what has become a signature, adjusting a shirt cuff) or riding down a collapsing building as easily as you would a slide at a water park.
There?s more, of course, including car chases, nominally exotic locales and a pulpy, visceral slugfest on a passenger train with a Bluto-size hurting machine (Dave Bautista) who?s evocative of that old Bond enemy Jaws. The train, as well as the purr of an Aston Martin, suggests that the filmmakers are working the nostalgia angle, though, the series has always been driven by longing for other men and worlds, for the British Empire, for a hyper-masculine savior, for sex kittens (friends or foes) and for a reassuring vision of the world in which the greatest threat is an orderly criminal organization run by a single supervillain. The superbaddie in SPECTRE is, alas, a bore, enlivened only by our series sentimentality and Christoph Waltz working his accented villainy with a smile.

Back in 2006, Craig slipped into Casino Royale and the role of James Bond like a middleweight?s fist in a boxing glove, bringing to the gig a battered beauty one punch away from ugly, a powerful chest that looks good in a tux and a visceral predatory quality that works equally well for annihilating villains and ladies. Craig was the right Bond for a moment still haunted by Sept. 11: He looked roughed up, possibly cruel and ready to fight. That Craig could also deliver layered emotional intensity and unexpected expressive delicacy was a nice bonus for a series that sprang back with deadly solemnity and scarcely a trace of the playfulness, much less the campy joie de vivre, that?s mostly associated with the Roger Moore era. ?I miss Roger Moore,? a friend recently sighed.

I don?t, with sincere apologies to Sir Roger. I like Craig?s Bond a lot, but I am also still pining for Sean Connery, the production designer Ken Adam and women whose names (performer and character alike) you remember, like Honor Blackman and Pussy Galore. Bond?s creator, Ian Fleming, once said that he wanted 007 to be, as he put it, ?an extremely dull, uninteresting man to whom things happened.? (Fleming borrowed the name from an ornithologist.) He also wanted Bond to be a ?blunt instrument.? The spy proved as blunt as an anvil on Wile E Coyote?s head, but the casting of Connery obliterated any notion that Bond could be wholly dull. The Bond movies needed sex to sell their violence, especially to a wide audience, and Connery was the ideal salesman.

Craig delivers the blows ? the crushing uppercuts and sucker punches ? more persuasively than the chaste kisses, although given the anemic seductresses Bond is often now paired with, the actor can scarcely take the blame. A few sashay through ?SPECTRE,? most agreeably Monica Bellucci, cinema?s current go-to Italian bombshell. She shows up in widow?s weeds, which Bond promptly removes while she babbles intel about her dead husband. The husband is a nail that leads to the shoe, the horse, the rider and finally the kingdom, little of which has anything to do with the world as it exists, with its environmental disasters and political uncertainties, religious wars and ordinary terrors. But then it?s hard to imagine Bond taking on, say, the Islamic State.

In 1966, Kingsley Amis attributed the success of the Bond stories partly to what he called the ?Fleming effect,? noting how Bond?s fantastic world, ?as well as the temporary, local, fantastic elements,? are ??bolted down? to some sort of reality.? The Bond movies have always managed to tap into reality by switching on a camera, a connection to the material world that lingered no matter how far out the villains, their wild lairs and intrigues. The current Bond team is trying to keep the audience entertained with new tricks and gizmos while keeping it kind of real, which perhaps explains why this Bond sweats buckets, tears up and even bares his feelings. Craig is very good at selling Bond?s humanity, though in truth, what has always really turned us on isn?t 007?s humanity but the reverse.