Review: In Spotlight, The Boston Globe Digs Up the Catholic Church's Dirt 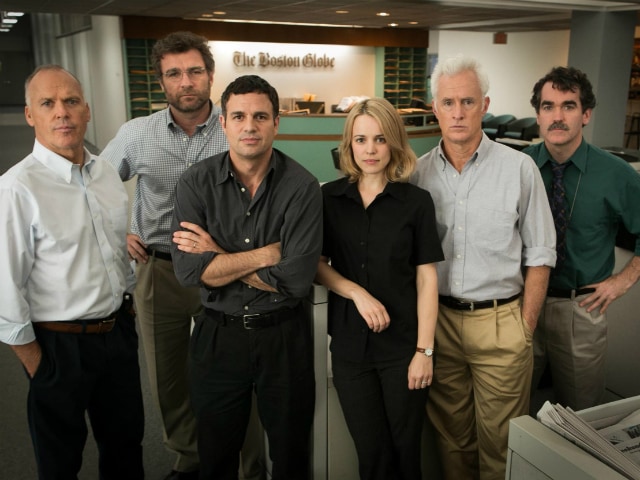 "The city flourishes when its great institutions work together," says the cardinal to the newspaper editor during a friendly chat in the rectory. The city in question is Boston. The cardinal is Bernard F. Law and the editor, newly arrived at The Boston Globe from The Miami Herald, is Martin Baron. He politely dissents from the cardinal's vision of civic harmony, arguing that the paper should stand alone.

Their conversation, which takes place early in Spotlight, sets up the film's central conflict. Encouraged by Baron, a small group of reporters at The Globe will spend the next eight months (and the next two hours) digging into the role of the Boston archdiocese in covering up the sexual abuse of children by priests. But the image of two prominent men talking quietly behind closed doors - Law is played with orotund charm by Len Cariou, Baron with sphinxlike self-containment by Liev Schreiber - haunts this somber, thrilling movie and crystallizes its major concern, which is the way power operates in the absence of accountability. When institutions convinced of their own greatness work together, what usually happens is that the truth is buried and the innocent suffer. Breaking that pattern of collaboration is not easy. Challenging deeply entrenched, widely respected authority can be very scary.

Directed by Tom McCarthy from a script he wrote with Josh Singer and based closely on recent history, Spotlight is a gripping detective story and a superlative newsroom drama, a solid procedural that tries to confront evil without sensationalism. Taking its name from the investigative team that began pursuing the sex-abuse story in 2001, the film focuses on both the human particulars and the larger political contours of the scandal and its uncovering.

We spend most of our time with the Spotlight staff. Their supervising editor, Walter Robinson (known as Robby and played by an extra-flinty Michael Keaton), has a classically blunt, skeptical newsman style, but he's also part of Boston's mostly Roman Catholic establishment. He rubs shoulders with an unctuous church P.R. guy (Paul Guilfoyle) and plays golf with a well-connected lawyer (Jamey Sheridan) who handled some of the archdiocese's unsavory business. The reporters working for Robby - Sacha Pfeiffer (Rachel McAdams), Mike Rezendes (Mark Ruffalo) and Matt Carroll (Brian d'Arcy James) - come from Catholic backgrounds, and have their own mixed feelings about what they're doing.

McCarthy, who played a rotten reporter on the last season of The Wire, views journalists primarily through the lens of their work. He follows Pfeiffer as she interviews survivors, Rezendes as he wrangles a zealous lawyer (Stanley Tucci) and Carroll as he digs into long-hidden records, including articles buried in the newspaper's archives. Though the film, like the Spotlight articles, avoids euphemism in discussing the facts of child rape, it also avoids exploitative flashbacks, balancing attention to individual cases with a sense of pervasive, invisible corruption. Baron urges the reporters to focus on the systemic dimensions of the story, and Spotlight does the same. As the number of victims and predators increases, and as it becomes clear that Law and others knew what was happening and protected the guilty, shock and indignation are replaced by a deeper sense of moral horror.

The outcome of the story may be well known, but McCarthy and his superb cast generate plenty of suspense along the way, and the idiosyncratic humanity of the reporters keeps the audience engaged and aware of the stakes. During the climactic montage - the presses humming, the papers stacked and baled, the trucks rumbling out into the morning light - my heart swelled and my pulse quickened, and not only because I have printer's ink running through my veins. Journalists on film are usually portrayed as idealists or cynics, crusaders or parasites. The reality is much grayer, and more than just about any other film I can think of, Spotlight gets it right.

It captures the finer grain of newsroom life in the early years of this century almost perfectly, starting with a scene in which a retiring veteran is sent off with awkward speeches, forced laughter and dry cake. As the story unfolds, there are scenes of pale-skinned guys in pleated khakis and button-down oxfords gathering under fluorescent lights and ugly drop ceilings, spasms of frantic phone-calling and stretches of fidgety downtime. Not even the raffish presence of "Mad Men" bad-boy John Slattery can impart much glamour to these drab surroundings. Visually, the movie is about as compelling as a day-old coffee stain. As I said: almost perfect.

The Globe itself (owned by The New York Times Company when the film takes place) is shown to be an imperfect institution. The people who work inside it are decidedly fallible - as prone to laziness, confusion and compromise as anyone else. Before 2001 - with some exceptions, notably in the work of the columnist Eileen McNamara (played here in a few cursory scenes by Maureen Keiller) - the paper overlooked both the extent of the criminality in the local church and the evidence that the hierarchy knew what was going on. The Spotlight reporters and editors are pursuing a big, potentially career-making scoop. At the same time, they are atoning for previous lapses and trying to overcome the bureaucratic inertia that is as integral to the functioning of a newspaper as the zealous pursuit of the truth. "What took you so long?" is a question they hear more than once.

To use Spotlight as an occasion to wax nostalgic for the vanishing glory of print would be to miss the point. The movie celebrates a specific professional accomplishment and beautifully captures the professional ethos of journalism. It is also a defense of professionalism in a culture that increasingly holds it in contempt.

McCarthy is a solid craftsman. The actors are disciplined and serious, forgoing the table-pounding and speechifying that might more readily win them prizes from their peers. Everything in this movie works, which is only fitting, since its vision of heroism involves showing up in the morning and - whether inspired by bosses or in spite of them - doing the job.