The Hateful Eight is, structurally speaking, an Agatha Christie mystery 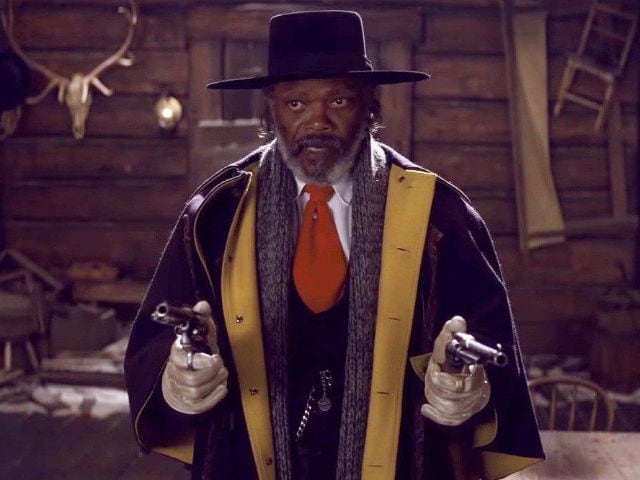 Quentin Tarantino is a scholar of old movies with a particular antiquarian fetish for the ways they used to be made and consumed. His eighth feature, The Hateful Eight, was shot on film with antique lenses and is being projected at some theaters in sumptuous, wide-screen 70-mm Panavision.

Tarantino and his director of photography, three-time Oscar winner Robert Richardson, revel in the tonal and compositional possibilities of the format. The dense colors and clever shifts in focus hold your attention when the dialogue starts to sputter. There is quite a lot to see and hear. Almost three hours long, The Hateful Eight has an overture at the beginning - a static title card accompanied by a sinister and swaggering Ennio Morricone score - and an intermission a little past the midpoint.

The movie is a western, a tale of vengeance and double-dealing set in a frontier outpost some time after the Civil War. Despite the vast screen, the sprawling length and the larger-than-life genre archetypes, it's a curiously small-scale entertainment. After a preliminary stagecoach ride through snow-lashed mountains, the ragged story settles into a confined space, where the main characters (a motley crew of outlaws and bounty hunters) drink coffee, warm themselves by the fire, and talk about this and that until it's time for them to start killing one another.

In its blending of verbiage and violence, its deft manipulation of tension, its blurring of the line between slapstick and shock, and its intricate weave of allusions to obscure and canonical films of the past, Hateful Eight is - what's the term I'm looking for? - a Quentin Tarantino movie. The cast is full of familiar faces from his earlier work: Kurt Russell and Zoe Bell from Death Proof, Michael Madsen and Tim Roth from Reservoir Dogs, and Samuel L. Jackson from just about everything else. The old films that Tarantino bites off and riffs on now include his own.

Though Hateful Eight takes place in a hermetic and familiar cinematic universe, it also, like Inglourious Basterds and Django Unchained before it, has more than just the history of cinema on its mind. It shares with those movies an impulse to imagine how the fantasy world of film genres might intersect with the cruelty of real-world history and offer a kind of belated symbolic redress. The winking and filibustering are undertaken with the serious intent of collecting make-believe payback for actual wrongs. This is an ethically tricky, artistically risky undertaking, but in Tarantino's hands, it is never not interesting.

Inglourious Basterds, with an audacity that may still be underappreciated, revisited the anti-Nazi Hollywood action dramas and comedies of World War II and pushed them to an outlandish and weirdly effective conclusion, as if the Holocaust could be avenged or undone by a lost platoon of time-traveling movie stars. Django Unchained, more controversially but no less brazenly, turned both moonlight-and-magnolias Southern sentimentality and he-man revenge-mongering upside down, offering a vision of African-American male empowerment to rival the wildest dreams of blaxploitation. Set in the Deep South before the Civil War, it transformed the prelude to that conflict from a grinding chronicle of resistance and political agitation into a burst of righteous score-settling.

The Hateful Eight takes this revisionist project into a post-bellum West that has always been more mythic than real. Mid-20th-century movie westerns - from old studio oaters to Technicolor pageants to spaghetti-flavored shoot-'em-ups - typically include Civil War veterans from both the Union and Confederate sides in a state of wary reconciliation. They are preoccupied with railroads, Indians and outlaws, preferring not to speak of the recent unpleasantness. Slavery is hardly ever mentioned, and on rare occasions when African-American characters appear (like Pompey, John Wayne's nearly silent companion in The Man Who Shot Liberty Valance), their stories remain untold.

Tarantino rewrites this tradition by casting Jackson as Marquis Warren, who wears a blue US Army major's uniform and carries with him a personal letter from Abraham Lincoln. Currently employed, like so many Tarantino heroes, as a bounty hunter, Marquis is well aware that neither his service record nor his connection to the martyred president will secure his dignity or protect him from bigotry. Before long, racial epithets and threats of harm are coming his way from all directions.

In Tarantino's world, hostility and camaraderie are close neighbors. Marquis encounters the friendly, grizzled face of John Ruth (Russell), a colleague in the business of pursuing miscreants. They have different approaches to the job, in particular the "dead or alive" part. Marquis prefers the first option, but John, known as the Hangman, believes in delivering his quarry to the proper authorities more or less intact. And so he is in the company of a live prisoner, Daisy Domergue (Jennifer Jason Leigh), who takes an instant dislike to Marquis.

The three of them, along with the stagecoach driver (James Parks) and a newly appointed sheriff (Walton Goggins) seek shelter from a blizzard at a saloon known as Minnie's Haberdashery, where they find a further collection of characters, including a retired Confederate commander (Bruce Dern) guilty of massacring black Union soldiers during the war, an itinerant hangman (Roth) and two fellows of dubious background (Madsen and Demian Bichir). Does this add up to eight? Don't worry too much about the math. If you read the names that appear on screen just after the overture, you'll know to expect even more company.

The timing and manner of their arrival should remain a surprise. It's enough to note that The Hateful Eight is, structurally speaking, an Agatha Christie mystery - with Marquis in the Hercule Poirot role - that ends in geysers of blood. Not only spurting from gunshot wounds, but also vomited from the mouths of poisoning victims.

The violence is less a shock tactic than a sorting mechanism, a way of separating the fans from the scolds. Tarantino has made a career out of forcing critics and cinephiles to choose, knocking the ambivalent off the fence with brilliant barrages of offensive language and mayhem. So maybe I'm repeating myself: The Hateful Eight is a Quentin Tarantino movie. But Tarantino is also repeating himself, spinning his wheels here in a way he has rarely done before. None of his other films venture so far into tedium or manage to get in their own way so frequently.

His provocative rereading of history is overshadowed by a plot that manages to be both cumbersome and flimsy. There is some real heat - some real hate - in the confrontation between Jackson and Dern, whose acting rises above the mannered self-consciousness that Tarantino's writing often calls forth. And the sense that the business of the Civil War remains unfinished produces a current of tension that stretches beyond the walls of Minnie's Haberdashery into the present. Tarantino doesn't make films that are "about race" so much as he tries to burrow into the bowels of American racism with his camera and his pen. There is no way to do that and stay clean.

Some of the film's ugliness is therefore a sign of integrity, and of relevance. But much of it seems dumb and ill considered, as if Tarantino's intellectual ambition and his storytelling discipline had failed him at the same time. Marquis Warren is a remarkable character - one of the boldest products of Jackson's fruitful collaboration with Tarantino - but the movie can't quite figure out what to do with him.

Unfortunately, it knows just what to do with Leigh's Daisy, who enters the film with a black eye and exits it - well, I guess I'd better not reveal much more. Suffice it to say that she is the film's scapegoat and punching bag and, above all, its excuse for its own imaginative failures. At a certain point, the n-word gives way to the b-word as the dominant hateful epithet, and The Hateful Eight mutates from an exploration of racial animus into an orgy of elaborately justified misogyny. The final scenes wrap up this shaggy-dog story with a nasty punch line, delivering on the promise of the film's title. I won't spoil it. See for yourself.

The Hateful Eight is rated R (Under 17 requires accompanying parent or adult guardian). How many times do I have to say that it's a Quentin Tarantino movie? Running time: 2 hours 48 minutes.