Review: The Intern Proves Experience Doesn't Have to Start at the Top

Nancy Meyers she loves the idea of the successful, independent woman. She also ardently wants to make room for daddy. 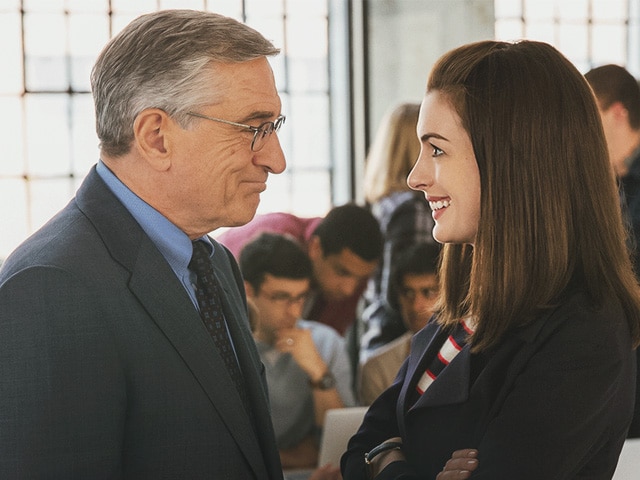 The director Nancy Meyers doesn't just make movies, she makes the kind of lifestyle fantasies you sink into like eiderdown. Her movies are frothy, playful, homogeneous, routinely maddening and generally pretty irresistible even when they're not all that good. Her most notable visual signature is the immaculate, luxuriously appointed interiors she's known to fuss over personally - they inevitably feature throw pillows that look as if they've been arranged with a measuring tape. These interiors are fetishized by moviegoers and Architectural Digest alike, ready-made for Pinterest and comment threads peppered with questions like, "Where do I get that hat?"

In her latest, Robert De Niro plays Ben Whittaker, a 70-year-old widower who shakes up his life when he becomes an intern at a Web startup where he soon becomes an office mascot and geezer Tinker Bell. Mostly, though, Ben is the benign face of patriarchy, a gentler, kinder father figure who comes equipped with a laundered handkerchief and the wisdom of the elders. He shares both with his new boss, Jules Ostin (Anne Hathaway), the founder of an online clothing site that has rocketed from zero to zillions in record time. She runs her company with a steely grip and a forced smile in a refurbished Brooklyn warehouse the size of Grand Central Terminal. She's a success and possibly an obsessive-compulsive (she all but showers in hand sanitizer), but she's also floundering, one crisis at a time.

Jules' problem is as familiar as the last headline that recycled the plagues of career women who want it all, apparently can't have it all and are unsure if they want any of it in the first place. "What do women want," Forbes asked a few years ago, echoing (still!) Dr. Freud. Among the suggestions: a little sadomasochistic me time a la Fifty Shades of Grey. For her part, Jules mostly wants someone to tidy up a cluttered table that sits like a reproach in the middle of the immaculate office and that for some reason she won't or can't tell someone to clean. Structurally, the messy table is a means for Ben, the ultimate can-do type whom Jules doesn't want to engage, to at last catch her attention. And he does just that when he clears it, inaugurating a work relationship that soon turns into a friendship.

The table is a silly, lazy screenwriting contrivance, and it says more about Meyers' conflicted ideas about powerful women than it conveys anything interesting about Jules. A successful Hollywood director like Meyers, for starters, would never have gotten this far and with a number of hits to her name if she had been afraid of telling other people what to do. But Meyers has some distinct ideas about women, work and power, and so she piles on the issues: Jules is chronically late to meetings, among other sins, although that seems to be because she likes riding slowly through the office on her bicycle. The bike suggests that she's a nonconformist, although the neat rows of her pretty, young, overwhelmingly white employees doing something in front of their computers suggest otherwise.

Ben serves as a kind of Mr. Fix-It, who, with quiet confidence, paternal competence and a driver's license, helps Jules get on track at work and home in the way that none of the man-children in her life can. Meyers has clearly been binging on Judd Apatow comedies, and she stacks her movie with assorted bromantic schlumps (including a troika that functions like a farm team version of Seth Rogen, Jonah Hill and Michael Cera), whose sloppy clothes and facial hair emblematize not only their arrested development but also a crisis in masculinity. That guys like these help run the world (and the entertainment business) without hauling around a leather briefcase is immaterial to Meyers, presumably because it would get in the way of her new take on the rescue narrative.

Ben doesn't sweep up the damsel like Daniel Day-Lewis in The Last of the Mohicans, but he proves more than up to the task. Meyers' script makes sure that's the case, as does the smartest choice she makes in The Intern: De Niro, her loosest, most valuable player. Long celebrated for his vein-popping intensity, De Niro has been yukking it up in comedy since the 1960s. Part of what distinguishes his later laugh-ins is that they're inextricably haunted by the ghost of Travis Bickle and sometimes - as when De Niro breaks out his terrifying ear-to-ear Soupy Sales grin - Rupert Pupkin, his nut job from "The King of Comedy." However straight his character, he can't help but be a destabilizing force, which is crucial when a movie is as hermetically sealed as The Intern.

Hathaway, who's regularly forced to take Jules's inner girl out for a sniffle and a sob, does her best, but it's hopeless. Jules is less of a character and more of a fast-walking, speed-talking collection of gender grievances, some of which originate with a squirmy house husband Matt (Anders Holm). One look at that guy's smile and you want De Niro to wipe it off. He doesn't, but there's no need to because De Niro owns the movie from the moment he opens his mouth, and is staring into the camera and right at you. (Oh, yes, he's lookin' at you.) You can't look away, and soon you don't want to. Certainly Meyers doesn't want anyone to because, though she loves the idea of the successful, independent woman, she also ardently wants to make room for daddy.