Review: The Revenant Welcomes You To Paradise. Now Prepare To Fall.

The Revenant is an American foundation story, by turns soaring and overblown 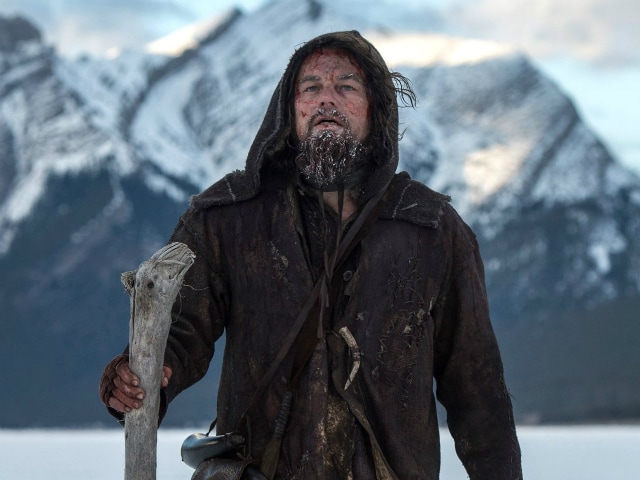 In The Revenant, a period drama reaching for tragedy, Leonardo DiCaprio plays the mountain man Hugh Glass, a figure straight out of American myth and history. He enters dressed in a greasy, fur-trimmed coat, holding a flintlock rifle while stealing through a forest primeval that Longfellow might have recognized. This, though, is no Arcadia; it's 1823 in the Great Plains, a pitiless testing ground for men that's littered with the vivid red carcasses of skinned animals, ghastly portents of another slaughter shortly to come. The setting could not be more striking or the men more flinty.

The Revenant is an American foundation story, by turns soaring and overblown. Directed by Alejandro Gonzalez Inarritu (Birdman, Babel), it features a battalion of very fine, hardworking actors, none more diligently committed than DiCaprio, and some of the most beautiful natural tableaus you're likely to see in a movie this year. Partly shot in outwardly unspoiled tracts in Canada and Argentina, it has the brilliant, crystalline look that high-definition digital can provide, with natural vistas that seem to go on forever and suggest the seeming limitless bounty that once was. Here, green lichen carpets trees that look tall enough to pierce the heavens. It's that kind of movie, with that kind of visual splendor - it spurs you to match its industrious poeticism.

If you're familiar with Inarritu's work, you know paradise is generally short-lived, and here arrows and bullets are soon flying, bodies are falling and the muddy banks of a riverside camp are a gory churn. Glass, part of a commercial fur expedition, escapes with others on a boat and sails into an adventure that takes him through a crucible of suffering - including a near-fatal grizzly attack - that evokes by turns classics of American literature and a Perils of Pauline-style silent-film serial. Left for dead by two companions, Glass crawls out of a shallow grave and toward the men who abandoned him. It's a narrative turn that suggests he, like so many before him, is one of D.H. Lawrence's essential American souls: "hard, isolate, stoic and a killer."

The movie is partly based on The Revenant: A Novel of Revenge, a 2002 historical adventure by Michael Punke inspired by the real Hugh Glass. In 1823, Glass signed on with the Rocky Mountain Fur Company for an expedition on the upper Missouri River that almost did him in when Arikara Indians attacked the group and, sometime later, he was mauled by a grizzly sow that may have been protecting her cubs. The bear should have killed Glass. Instead, its failure to do so - along with Glass' frontier skills, some help from strangers and the indestructible romance of the American West - turned him into a mountain man legend and the inspiration for various accounts, including a book-length poem and a 1971 film, Man in the Wilderness.

The historical Glass was somewhat of a question mark, which makes him a spacious vessel for interpretation. Inarritu, who wrote the script with Mark L. Smith, fills that vessel to near overflowing, specifically by amplifying Glass with a vague, gauzily romantic past life with an unnamed Pawnee wife (Grace Dove) seen in elliptical flashback. By the time the movie opens, the wife is long dead, having been murdered by white troops, and Glass' son, Hawk (Forrest Goodluck), has become his close companion. The son's name evokes James Fenimore Cooper's Hawk-eye (The Last of the Mohicans), and together Glass and Hawk create an intimate, familial bulwark - and a multicultural father-and-son dyad - in a wilderness teeming with assorted savages.

Who exactly the savage is here is never much of an issue; as a sign scrawled in French spells out in one scene, everyone is. Inarritu likes big themes, but he isn't given to subtlety. There's a shocker of an image, for instance, in Amores Perros, his feature debut, which expresses his talent for finding the indelible cinematic shot, the one you can't look away from even when you want to, and also underscores his penchant for overstatement. One of those multi-stranded stories that he helped repopularize (Babel, etc.), Amores Perros includes a murder capped by the vision of human blood spilled on a hot griddle. This being a big moment as well as an illustration of Inarritu's sensibility, the blood doesn't just splatter, it also sizzles. It's filmmaking as swagger.

I thought of that artfully boiling blood while watching The Revenant, with its butchered animals, muddled ideas, heart-skippingly natural landscapes and moment after moment of visual and narrative sizzle. What makes too many of his moments, ghastly and grand - an arrow piercing a man's throat, the beatific face of a beloved, a man scooping the innards out of a fallen horse, the enveloping softness of the dusk light - isn't the moment itself, but that little something special that he adds to it, whether it's a gurgle of blood in a throat or the perfectly lighted sheen of a hunk of offal. Inarritu isn't content to merely seduce you with ecstatic beauty and annihilating terror; he wants to blow your mind, to amp up your art-house experience with blockbusterlike awesomeness.

Sometimes, as with Birdman, Inarritu's last movie, this desire to knock the audience out pays off. The Revenant is a more explicitly serious, graver and aspirational effort. Working again with a team that includes the director of photography Emmanuel Lubezki (whose credits include "Birdman") and a handful of special-effects companies, Inarritu creates a lush, immersive world that suggests what early-19th-century North America might have looked like once upon an antediluvian time. Yet he complicates the myth of the American Eden - and with it the myth of exceptionalism - by giving Glass an Indian wife and mixed-race son. It's a strategic move (and another bit of sizzle) that turns a loner into a sympathetic family man. It also softens the story. Instead of another hunter for hire doing his bit to advance the economy one pelt at a time, Glass becomes a sentimentalized figure and finally as much victim as victimizer.

From Davy Crockett to Kit Carson, the mountain man has long had a hold on the American imagination and recently made a revisionist appearance in the form of Katniss Everdeen, the heroine of The Hunger Games. The mountain men in The Revenant are drawn along more traditional and masculine lines, from their bushy beards to the buckskins and bulky furs that at times make them look almost indistinguishable from the animals they kill. Inarritu is entranced by this world, with its glories and miseries, its bison tartare and everyday primitivism, which he scrupulously recreates with detail and sweep. He's particularly strong whenever Glass, employing that old can-do pragmatism, goes into survivalist mode to cauterize a wound, catch a fish or find shelter.

But Inarritu blows it when he moves from the material to the mystical and tries to elevate an ugly story into a spiritual one, with repeated images of a spiral and even a flash of homespun magical realism. Worse, he makes Glass not just a helpless witness to a murder that's a stand-in for the genocide of the Indians, but also a proxy victim of that catastrophe. It's disappointing in a movie that offers much and that actually points to another foundation story that emerges when one of Glass' companions, Fitzgerald (Tom Hardy), tries and fails to get paid for his labor. He learns too late that the system that turns people and animals into commodities is rigged against men like him. And while the simple facts of that system may be too brutal to feed the ambitions of a movie like "The Revenant," we know that the system nevertheless helped build a nation.