Rocky Handsome is a dizzying blur 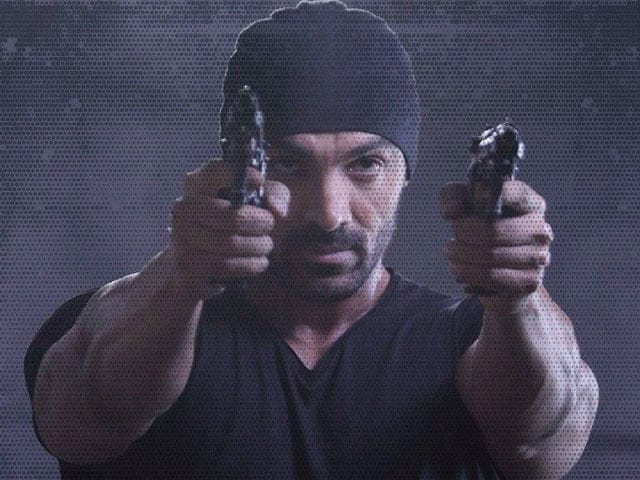 Unapologetically gory and visceral, Rocky Handsome revels in relentless violence. But for a film about a 'trained assassin' and his bonding with a hapless child in desperate need of help, it is woefully low on emotional muscle.

The result is a slick, stylistically derivative neo-noir thriller that is surprisingly humdrum.

A full-on rehash of a 2010 Korean action flick (The Man from Nowhere), Rocky Handsome is set in a Goa where criminal cretins crawl out of every conceivable crevice.

The film's sourpuss titular hero is a man possessed, a "cleaner" in the manner of Luc Besson's Leon the professional, out to rid the city of undesirable elements.

The insuperable protagonist swings into action and goes after the scumbags even as men from the local anti-narcotics cell do their bit to crush the cartels.

But too many baddies and battlers botch up the broth - and very badly at that.

Although a meanie played by director Nishikant Kamat, one half of a pair of ruthless gangster-brothers, moves to the forefront in the film's climax, none of the bad guys emerges from the shadows of ambiguity.

The screenplay (adapted by Ritesh Shah) takes inordinately long to provide clarity on the central character and his professional and personal antecedents.

On one rare occasion when he deigns to articulate his thoughts, the hero declares: "Main sirf abhi ki sochta hoon (I think only of the present)."

He prefixes that assertion with a statutory warning of sorts: those who think of tomorrow die today.

He obviously has an issue with anguishing over the future, but the past does weigh heavy on him. And that is what lies at the root of the demons in his mind.

A departed wife (Shruti Haasan in a special cameo), an unborn child, a murderous attack and years of lurking in undercover anonymity have scarred him for life.

For good measure, he has bullet and stitch marks all over his ripped body. His rough knuckles bear signs of many a bare-hands duel.

But his face is conveniently and miraculously unblemished. The only thing that mars his inscrutable visage is a permanent scowl.

Not that it matters: the focus anyways is more on his pecs, biceps and abs than on his facial expressions.

It is fair to wonder if this film's heavy-weather feel stems more from the impenetrable disposition of Kabir Ahlawat alias Rocky Handsome or from the deadpan lead performance.

A suitably brawny John Abraham, who is also co-producer of the film, is a sullen pawnshop owner who turns into an unstoppable killer when a vicious gang of drug peddlers abducts Naomi (Diya Chalwad), an eight-year-old girl he has developed a soft corner for.

The girl, Kabir's neighbour, has a heroin addict for a mom (Nathalia Kaur). The latter causes her daughter much grief while exposing herself to grave danger.

Naomi occasionally sneaks into Kabir's cheerless pad, pawns her belongings to him and shares his meals.

One night the kid even paints a bright yellow-and-black smiley on his nail. That is the closest Rocky Handsome gets to suggesting that the protag is human, not a humanoid.

And then the goons strike and all hell breaks loose. The one-man demolition squad goes into overdrive.

He looks more like a wound-up automaton than a believable individual with scores to settle with fate - and a battery of bad guys.

Among the latter lot are figures that are grotesque caricatures, including one (Teddy Maurya) who laughs, dances and playacts his way through many abominable acts that range from gleefully bludgeoning adversaries to nonchalantly slicing up captives to harvest their organs.

Another one, Attila (played by Paris-born Thai martial arts action star Kazu Patrick Tang), as brutal and fearless as the Hun that we know from historical references and from Anthony Quinn's 1950s impersonation on the big screen, is a fierce fighter who gives Rocky a tough time.

But this devil incarnate is allowed a fleeting moment of humanity that sets the stage for a final twist.

The most baffling of them all is the child-lifting Carla Aunty (Suhasini Mulay in a blink-and-you-miss appearance).

It is unlikely that the veteran actress has ever been drawn into a screen role as insubstantial as this.

After rivers of blood have been spilled, a teardrop and a hint of a smile are resorted to in a bid to wash away the stains and seek redemption.

In the end, Rocky Handsome is a dizzying blur that even director of photography Shanker Raman's extraordinarily good lighting and lensing cannot salvage.

Rocky Handsome is a rare Hindi film that is set in the coastal state and yet stays away from the beaches.

The beaches that appear in the film are located in Seychelles and seen only in flashbacks to happier times in the hero's life.

A man from nowhere - the protagonist of Ramgopal Varma's Satya - had strayed into Mumbai in the late 1990s and redefined Bollywood's underworld dramas for good.

This 'nowhere man' seems intent on a slow, unsteady walk back to where he has come from. Nowhere. That pretty much sums up the film.

Rocky Handsome is strictly for fans of ultra-violent action movies.