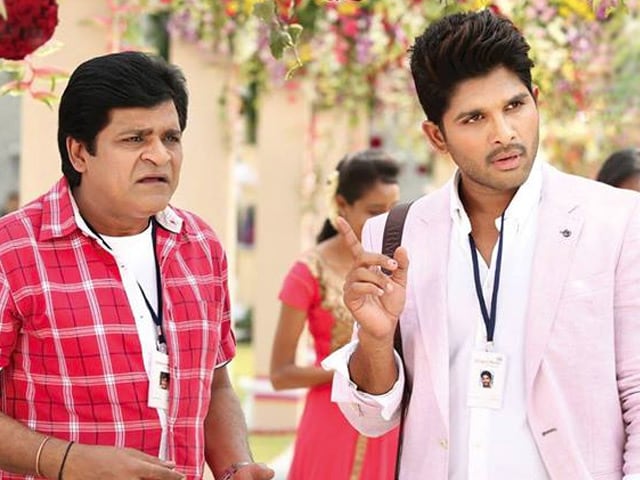 Nothing about Trivikram's S/O Satyamurthy stays with you the minute you walk out of the cinema hall as everything about it is predictable.

Akin to the title, the film, over two-and-a-half-hours long, explores the bond between a father and son; just like how Trivikram's last outing Attarintiki Daaredhi was about the strained relationship between the hero and his aunt.

While all the quintessential Trivikram trademark moments can be found in S/O Satyamurthy, what you miss is the magic he created in his career's best film Athadu.

Arjun plays Viraj Anand, who is introduced to us as the son of Satyamurthy (Prakash Raj), and not by his name. Satyamurthy is the perfect embodiment of goodness, and he always swore by it, even till his last breath. He's so good that he lets people cheat him and when asked why by his son, he shares a lovely anecdote.

Trivikram has this habit of drawing inferences from life, history and epics like Ramayana and Mahabharat, and such references are aplenty here. There's a wonderful stretch in the villain's house where all the characters dine with a dead body. These are some of the best moments in the film, which is otherwise boring.

Trivikram, as usual, impresses with his dialogues, which continue to be his strength. After all, here's a filmmaker who started his career as a dialogue writer. His lines rhyme and are easy to remember and are equally powerful, especially when delivered by, say an actor with a baritone like Amitabh Bachchan.

But these lines fail to create the intended impact when delivered by Arjun, even though they sound good. Most suitable for playing a lover boy, Arjun fails miserably as the son who desperately tries to keep his father's legacy alive. It's impossible to accept him as Viraj Anand, despite all the effort Trivikram has put into adding weight to his character.

There are so many actors and yet their performances are not worthy of a discussion. For instance, Kannada actor Upendra plays the villain and with the kind of powerful introduction he's given, you expect chills to be sent down your spine, but what we get to see is disappointing.

The only saving grace is Brahmanandam's comedy, which unfortunately comes quite late in the film.

S/O Satyamurthy is a predictable and sloppy family drama with a few high and mostly low moments.