It has enough heart. It 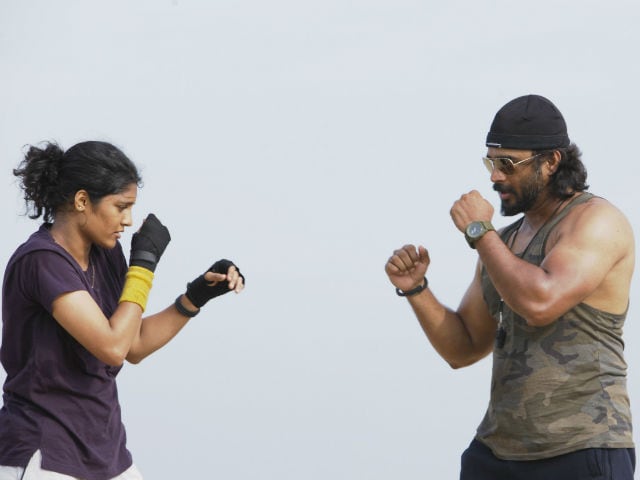 At the centre of Saala Khadoos are two down-and-out individuals. One is a disgraced ex-boxer whose life has been a story of missed opportunities.

The other is a feisty young girl from a Chennai slum who has nothing to lose.
The duo forges an unlikely and uneasy alliance and throws punches at a world in which the odds are stacked heavily against them.

In one bout, the film?s female protagonist is pitted against a Russian pugilist from a higher weight category. The former is knocked out in nine seconds flat.

In another sequence, the girl ? she idolizes Muhammad Ali and aspires to ?float like a butterfly and sting like a bee? ? fights with a broken right fist. She ends up losing.
Needless to say, the spirited lass keeps bouncing back from the blows she is repeatedly subjected to. After all she has the support of a coach who is willing to go the distance with her.

Despite being packed with all the classic ingredients of a sports drama, Saala Khadoos can only manage to be sporadically watchable.

The drama revolves around Adi Tomar (R Madhavan), a pugilist who has lost his chance of a shot at sporting glory because of the perfidy of his own coach.

He has other reasons to be peeved with life, not the least among which is the fact that his wife has left him for another man.

To make matters worse for him, Adi is falsely accused in a sexual harassment case and banished from the boxing hub of Hisar and transferred to Chennai.

There he chances upon a rambunctious fisherwoman, Madhi (debutante Ritika Singh) who accompanies her struggling elder sister Laxmi (Mumtaz Sorcar) to boxing bouts when she isn?t hawking her day?s catch.

Adi spots the spark in Madhi and takes her under his wings. He resolves to hone her inborn skills to the point from where she can make a bid for the world championship.

The rookie boxer?s story of the quintessential underdog chasing greatness is inevitably strewn with the expected complement of setbacks.

The biggest hurdle in her and her mentor?s way is the national women?s boxing head coach Dev Khatri (Zakir Hussain), a creepy official who will stop at nothing in throwing his weight around.

These include Madhi?s own emotional frailties and the envy that her rapid progress under Adi?s tutelage arouses in her elder sister, a girl who hopes to escape poverty by landing a sporting quota job in the police force.

There can be no denying that the boxing scenes in Saala Khadoos are infinitely more realistic than the ones we saw in 2014?s messily melodramatic Mary Kom.

Newcomer Ritika, too, is far more convincing as an untamable boxer than the horribly miscast Priyanka Chopra was in the much-hyped biopic.

That apart, Madhavan nails the role of the cantankerous but committed boxing coach who refuses to give up on his new ward no matter what is hurled at him by way of provocation.

Saala Khadoos also has several competent supporting actors in Nasser (playing Pandian, a long-time junior coach in Chennai), M.K. Raina (in the role of a former boxer and Adi?s confidant) and Bengali actress Mumtaz Sorcar (in her first Hindi film as the heroine?s sister, a rather hazily etched figure).

Why does Saala Khadoos fail to land the knockout punch in spite of getting a few of its hooks and upper cuts right?

For one, despite the many promising situations that it rustles up along the way, there is little room in the well-intentioned yet rough-hewn drama for genuine surprises.

Moreover, the overly obtrusive background score and the songs that are frequently bunged in to heighten emotion are rather distracting.

Saala Khadoos, for all the storm that it seeks to whip up in the ring and outside it, does not string together enough points to be declared an outright winner.

It has enough heart. It?s the heat that is missing.