San Andreas: Rushing to Salvage a World in Ruins

San Andreas, for its part, delivers a perfectly sensible message: Listen to scientists. 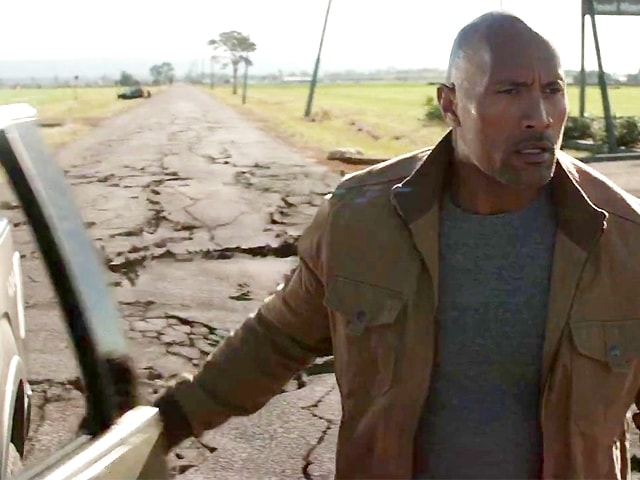 The big earthquake in San Andreas - excuse me, the "seismic swarm event" - has its pros and cons. On one hand, it tears the state of California asunder. On the other, it brings a family together. As is the custom in movies of this kind, destruction is both universal and selective. Two major American cities are pretty much obliterated, catastrophes that presumably cause death on a huge scale. But the half-dozen or so people we care about struggle for survival with what the conventions of genre if not the laws of nature assure us are reasonably good odds.

Those folks include Ray (Dwayne Johnson) and Emma (Carla Gugino), a separated couple one signature away from divorce. Ray flies a rescue helicopter for the Los Angeles Fire Department. Emma is about to move in with her new boyfriend, Daniel (Ioan Gruffudd), a superrich real estate developer. The contrast between her former and current male companions might be summarized in an Internet dating-service questionnaire. Who would you rather be with: 1) a guy who has a private jet and a limo, or 2) a guy who can rip the door off a Subaru Forester with his bare hands?

Once the big quake hits - or one of them, anyway, the one that knocks over the Hollywood sign and reduces downtown Los Angeles to a mess of glass, rebar and concrete - Emma and Ray reunite to search for their daughter Blake (Alexandra Daddario), who has gone up to San Francisco with Daniel on her way back to college. (Another daughter, Mallory, drowned in a rafting accident some years before, a trauma that contributed to her parents' split and to their determination to rescue Blake.)

For reasons succinctly explained by the movie's resident expert (a Caltech seismologist played by Paul Giamatti), the Big One is heading for the Bay Area, so the panicked parents must race against the clock. Their daughter, meanwhile, has befriended a pair of British brothers (Hugo Johnstone-Burt and Art Parkinson) who fulfill both the cute-romantic-interest and the impish-sidekick quotas.

Not that there's a lot of time for canoodling or wisecracking. The dialogue (the script is by Carlton Cuse) consists mainly of variations on "Hurry up!" "Get out of the way!" "Oh my God!" and, "Let's go get our daughter." That's as it should be, of course. Eloquence is the first casualty of disaster, though the seismologist (encouraged by a journalist played by Archie Panjabi) does manage to issue a clear and cogent warning. And San Andreas, for its part, delivers a perfectly sensible message: Listen to scientists.

Also to firefighters and their daughters. The ground-level action is a series of problem-solving challenges, which are stressful, in a fun kind of way, to observe. (The director is Brad Peyton, who also directed Johnson in Journey 2: The Mysterious Island.) But in a movie like this, the big money is spent - and, the studio hopes, made - on images of extensive devastation. And so while some would-be blockbusters stake their special-effects budgets on laying waste to just one North American city, San Andreas goes for two. (Three if you count Bakersfield, but I'm not sure the movie really does.)

The most disturbing thing about this may be how dull and routine it seems. Computer-generated imagery can produce remarkably detailed vistas of disaster - bridges and buildings collapsing; giant ships flung onto urban streets; beloved landmarks pulverized - but the technology also has a way of stripping such spectacles of impact and interest. And we have seen so many of them recently that it's hard not to shrug, stifle a yawn and reach for the popcorn when the Golden Gate Bridge once again buckles and sways and drops vehicles into the bay.

What does it all mean? My colleague Michael Cieply recently noted that San Andreas, the latest in a long line of California-wrecking movies, arrives when the state is gripped by drought and environmental anxiety. The film might be a reflection of those fears, and also of the rest of the country's love-hate relationship with its most populous state.

It might also express a bit of intrastate rivalry, in particular the tension between Hollywood and Silicon Valley, here represented by the larger cities most identified with them in the popular imagination. And the SoCal bias is pretty clear: Los Angeles is battered, but San Francisco is much harder hit, and it's the home base for the closest thing the movie has to a villain, a soulless incarnation of selfishness and greed. The guy who saves the day is a public employee, and probably a union member. Liberal Hollywood strikes again!