Sanam Re is purported to be a more mature romance 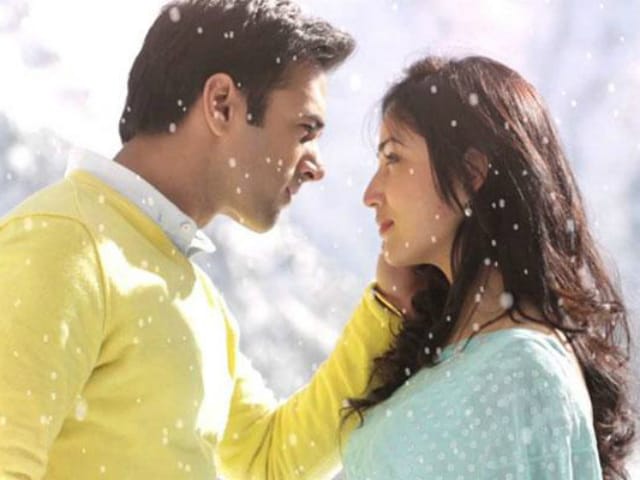 You think the title Sanam Re has an incomplete ring to it? Wait until you watch the film.

The befuddling, undercooked storyline is sure to leave most viewers wondering where it actually begins and where it ends. Sanam Re is a juvenile jumble that is undecipherable.

Given the way the film rambles aimlessly and gets all tangled up by the time it gets to the halfway mark, it would be pointless seeking pointers from the scriptwriter (Sanjeev Datta). He himself probably has no clue.

In Sanam Re, director Divya Khosla Kumar redefines the 'art' of going around in circles and returning to the same point after every 15 minutes or thereabouts.

Never has a two-hour film felt as long as this story of a small-town boy Akash (Pulkit Samrat) whose dreams hinge on getting hitched to a girl who lives down the lane, 500 steps, to be precise, away from his home.

He counts those steps a number of times in the course of the film, as he finds the girl - Shruti (Yami Gautam) - loses her, regains her and loses her again, by which point the audience is scarcely interested in the fate of this dead-end relationship.

But that isn't the only illogicality that the film wallows in. The town that Akash and Shruti belong to is a place where winter never ends and the bright blue river that flows near it never freezes.

It always snows in Tanakpur, where Akash's grandpa (Rishi Kapoor) owns a photo studio called Johnson & Johnson that he hopes to pass on to the young man.

But at the first opportunity, Akash leaves his town and his girlfriend Shruti behind and heads to the big city for further education and employment.

This champion drifter works in a Mumbai company and is slave-driven by a cruel boss (Manoj Joshi) who appears to him variously as the god of death Lord Yama, Count Dracula and Osama bin Laden.

No prizes for guessing, Akash hates his job. To give himself a break, he returns to his native Tanakpur to help his father sell the photo studio which, as Akash says, has lost its relevance in this era of mobile phones and selfies.

The grandfather, who doubles up as the town astrologer, makes a prophecy - Akash's childhood love will always be with him but he will never get her.

The prediction comes true and the hero spends the rest of his life chasing the elusive girl in places as far apart as the Canadian province of Alberta, the city of Mumbai and the remote region of Ladakh.

It makes for a mind-numbingly boring drama that is aggravated by a brainless detour that takes the hero to a yoga camp in Alberta.

Love isn't the only reason why he is there. He is on a mission to secure a lucrative contract that his company has lost.

He woos Mrs Pablo (Urvashi Rautela), the woman who holds the key to the deal. But Akash's plans, pretty much like the film itself, goes completely haywire when Shruti lands in their midst.

As Mrs Pablo writhes in jealousy-induced agony, Akash and Shruti go on a wild romp that is meant to be funny. It's funny all right, but the joke is always entirely on the film.

The 'I-will-do-what-I-like' approach that the director adopts only means that she has a carte-blanche from producer-husband Bhushan Kumar to spend all the money that she can without having to unduly worry about recovering it.

The writer of this unmitigated disaster believes that getting a character to mispronounce the name of Shakespeare and merrily misquote the Bard is witty. Pity!

Divya Khosla Kumar's first film, Yaariyan, was a campus rumpus that got away with its silliness because it was targeted at a segment that has a seen and digested much worse.

But Sanam Re is purported to be a more mature romance. Nothing that transpires in the film comes anywhere near living up to that expectation.

As for the acting, Pulkit Samrat is fine as long as he is required to go shirtless and flaunt his chiselled body.

With Yami Gautam, it is exactly the opposite - she is clearly ill at ease with all the skin show forced upon her by a script that cannot do any better.

The curvaceous Urvashi Rautela, on her part, does her bit to push up the oomph quotient. But it is all an utter waste in the end.

Sanam Re is a surefire cure for insomnia. Its air of somnolence is so pervasive that a yawn a minute is absolutely guaranteed.

The director gets one star for the nerve that helps her believe that this flimsy film has the depth to hold its load of pop philosophy about love and companionship without coming unstuck.

The additional half a star is for cinematographer Sameer Arya. The frames that he composes are far too good for a film as awfully bad as this.