The picture of elegance that Macra Hocane projects is undermined by the inanities that her character has to mouth to justify her presence in the film. 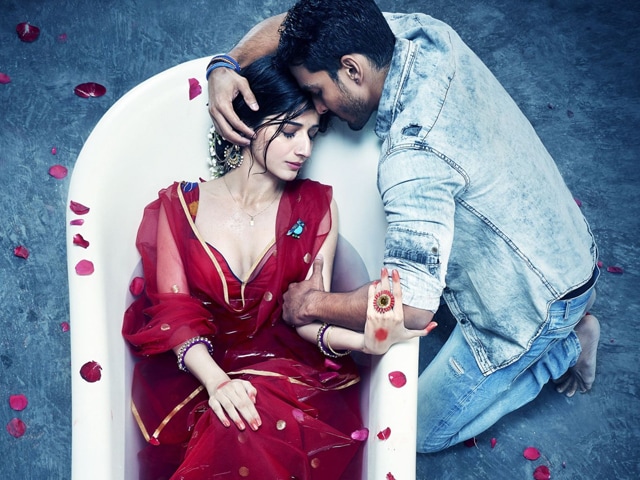 Every good love story has a touch of the absurd. But Sanam Teri Kasam is neither a believable romantic yarn nor are its stabs of stupidity within the realms of the passable.

The film is helmed by not one but two directors, and that?s one too many, but it?s completely directionless.

Its asinine and unending narrative convolutions reinforce long discarded stereotypes about gender roles and the idea of beauty.

In the bargain, it falls back on mothballed devices, including a terminal illness ? a deep tumour in the brain, no less ? to add a tragic tinge to the mayhem.

Sloppy writing and an abject absence of editorial sharpness are the film?s principal bane.

Director duo Radhika Rao and Vinay Sapru do not help matters. They stretch virtually every scene beyond the limits of endurance.

In an inordinately and tediously long hospital scene, every major character is allowed a shot at mawkish sentimentality. But none is able to create so much as a single ripple of genuine emotion.

Sanam Teri Kasam runs for over two-and-a-half hours but gets nowhere.

The slapdash story, for whatever it is worth, is so utterly illogical that the film?s reasonably personable lead actors do not have a chance in hell of rising above the monumental mess.

Telugu movie star Harshvardhan Rane has the looks and screen presence to pass off for a convincing hunk. But surely there is more to acting than looking good.

But the picture of elegance that she projects is undermined by the inanities that her character has to mouth to justify her presence in the film.

Indeed, the silliness quotient of Sanam Teri Kasam overshadows everything else.
So no matter how hard the lead pair tries to carry a crushing load of rubbish to a level of respectability, its efforts can only be futile.

The plot is brainlessly bizarre. It hinges on a patriarch who forbids his younger daughter to tie the knot simply because the latter?s plain Jane elder sister is unable to get an IIT-IIM Tamil Brahmin grad to marry her.

The male protagonist Inder Parihaar (Rane) hovers around aimlessly in the background.
Dubbed a ?shirtless, shameless scoundrel?, he is a tattooed rebel with a dark past. He drowns himself in sexual flings and alcohol-fuelled excesses to tide over his woes.

The heroine Saraswati Parthasarathy (debutante Mawra Hocane, complete with a pair of staid spectacles and an ash-smeared forehead) is the star-crossed neighbour who runs into a wall every time her parents look for a match for her.

The two discover each other when Saraswati decides she needs a makeover and has to reach Inder?s estranged girlfriend, who it turns out is a beauty expert.

But it is the latter, a complete floozy, who is more in need of a new look than anyone else in this film. But that is another story that is quickly buried in the detritus.

The stumbling block is Saraswati?s father Jayram Parthasarathy (Manish Chaudhari, hopelessly miscast as a South Indian) who thinks his daughters will do his bidding come what may.

What makes Sanam Teri Kasam a farce without end is the senseless to-ing and fro-ing that the lovebirds do all through the film as the girl lurches from one ridiculous situation to another.

Matters take a turn for the worse when she finally gets a makeover at the hands of a man (Vijay Raaz) who looks more like a pimp ? he probably is one but the screenplay makes no attempt to throw any light on that part of the tale ? than a personality grooming wizard.

Saraswati sheds her salwar-kameez and chashma, slips into western attire and promptly starts preening over her pretty face.

Yes, everything in Sanam Teri Kasam is as simple as that.

The film is replete with loose ends. Several of the characters, including the hero?s estranged criminal lawyer-father (Sudesh Berry), float in and out without any logic.

The hero asks the heroine, a librarian, to give him a book that a man who has served an eight-year jail term should read. She fishes out J.D. Salinger?s The Catcher in the Rye. Go figure!

The girl?s father, dead against letting his daughters marry boys of their choice, is seen with an anthology of the love poems of Rumi, which earlier in the film, he asks Saraswati not to read.

The makers of Sanam Teri Kasam are embarrassingly outdated in their thinking ? they would have us believe that all that a Parthasarathy girl has to do to attain salvation is become a Parihaar. Which century do they live in?

On an outing to the market, Saraswati, in order to force song and dance situation, gets high on a swig of bhang. In the next scene, she sheepishly asks Inder: ?Did I embarrass you?? Embarrassment? That is the understatement of the century.

Sanam Teri Kasam is excruciatingly painful. The torture it inflicts has as much to do with its length as with what transpires between the start and end points.

This is an unmitigated disaster, a travesty of the medium that only a miracle can save from sinking without a trace.