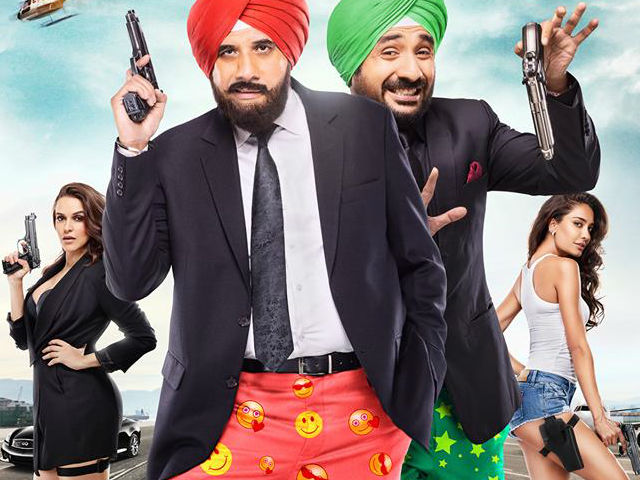 Santa Banta jokes have been done to death. But innocuous as they are, they haven't ever killed anyone.

But this film, which uses the names of Santa and Banta to peddle its imbecile gags, is a cruel, potentially harmful joke.

Why on earth has Santa Banta Pvt. Ltd. been made? Keep guessing! It is mystifyingly bad: all noise, no poise.

Boman Irani and Vir Das don the guise of the two titular characters who, pretty much like the film they are in, can get nothing right.

The duo is hemmed in by an array of shadowy characters who float in and out of the frame without any specific purpose that can be comprehended.

If nothing else, Santa Banta Pvt. Ltd. might serve the purpose of being held up as a textbook demo on how a film should not be made.

One has no quarrel whatsoever with slapstick comedy because mindless drollery, when executed with imagination and sense of genuine fun, does often yield inspired lunacy.

But not here. Santa Banta Pvt. Ltd. is scattershot moviemaking at its very worst. Not for a single moment does the film offer the faintest glimpse of sanity.

Looking for a story out here? It might be easier to find water in a parched desert.

But yes, the film does have a starting point. India's ambassador to Fiji is abducted. The country's spy agency goes into a tizzy in Delhi.

Two bumbling yokels are plucked out of the Punjab countryside and packed off to Fiji to get to the bottom of the case and all hell breaks loose.

Beeji to suna thha, yeh Fiji kya hai, one of the two men intones. Get the drift?

Santa Banta Pvt. Ltd. runs for nearly two hours, but neither the pair of makeshift sleuths for whom videsh translates to Ca-nay-daa nor the nonplussed audience is anywhere nearer the truth by the end of it all.

The film is liberally peppered with silly Santa Banta PJs but the joke is nearly always on this bizarre concoction.

Look at the line-up of actors that director Akashdeep has conned into this unbridled piece of moronic cinema (in the order of appearance):

Ram Kapoor: A businessman called Sonu Sultan, whose name gets twisted by Santa and Banta, from Sonu Nigam to Rehana Sultan, in an attempt to generate mirth

Sanjay Mishra: A secret agent in the service of the republic of India

Ranjeet: Antonio Kapoor, a drug dealer who mistakes Santa and Banta for suppliers and pays the price for his folly

Johnny Lever: Pushkar Nepali Chooza, a don on the island of Fiji, and brother-in-law to two henchmen (Vrijesh Hirjee and Vijay Patkar)

There is good reason for reducing the synopsis to only an indicative list of the actors/characters. There is little beyond their names and principal traits that the screenplay is willing to lay on the table clearly enough to be deciphered.

The only question of interest in this raggedy rigmarole is: who is gunning for whom and why? No prizes for guessing: nobody knows.

It is too much to expect Boman Irani, no matter how good and chameleon-like he might be as a comedian, to pull off the blundering sardarji act with any degree of conviction. He does not.

Vir Das, too, is an effective stand-up comic on most days, but he never manages to look or sound like a Punjab village bumpkin.

So, only 15 minutes into the film, the audience is ready to yell: Stop this nonsense!

The only way to stop Santa Banta Pvt. Ltd. from lunching an assault on your sanity is to steer clear.

This is a film that has no saving graces at all: not worth wasting time or money on, even if you happen to be a diehard Boman Irani fan.

Coming to think of it, Boman Irani admirers in particular should make it a point to stay away. Watching him being so summarily shortchanged by a spectacularly sloppy script isn't an edifying sight.