Sicario Digs Into the Depths of Drug Cartel Violence

After a while Sicario starts to feel too easy, less an exploration than an exploitation of the moral ambiguities of the drug war. 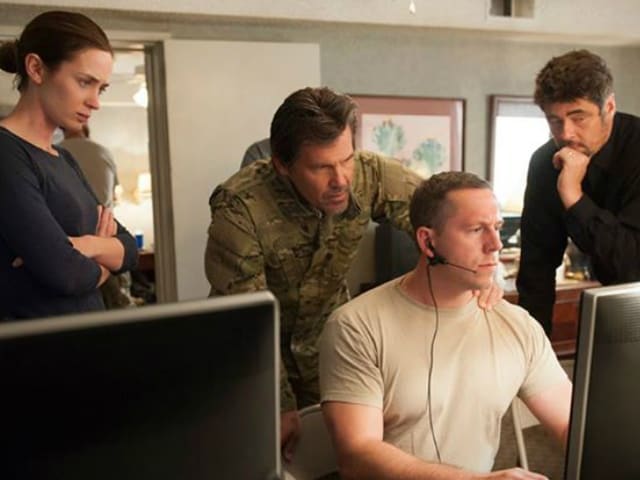 Villeneuve's 2009 feature, Polytechnique, was the almost unbearably meticulous reconstruction of an actual mass shooting at a Montreal university. He followed it with Incendies, a grim family chronicle set mainly in a thinly fictionalized Lebanon during that country's long civil war. Sicario, his new movie, visits a different war zone: the United States-Mexico border, where the murderous business practices of the Mexican drug cartels threaten to bleed across the Rio Grande.

The dry, menacing scenery surveyed in Sicario is real, of course, as are some of the aspects of its harrowing story. But the desert and the drug war - a landscape evoking old westerns populated with a new cast of outlaws and would-be sheriffs - has also become fertile pop-cultural ground. We know the territory, thematic and geographic, from No Country for Old Men and Breaking Bad, from The Counselor and Traffic and even Weeds.

Villeneuve, aided by Taylor Sheridan's lean script, Roger Deakins' parched cinematography and Johann Johannsson's slow-moving heart attack of a score, respects the imperatives of genre while trying to avoid the usual clichés. It's not easy, and he doesn't entirely succeed. But he's also trying to scramble some of the usual codes, and to paint a morally complicated picture instead of restaging a morality play.

Sicario tells the story of an ambitious operation undertaken by an alphabet soup of U.S. law enforcement agencies against top-ranking members of the Sonora cartel. The action is viewed mostly through the eyes of Kate Macer (Emily Blunt), an FBI agent who is brought into the plan for reasons she doesn't quite understand. Nor is she given much information about what's going on once she's on board.

Kate's expertise is tactical. She and her partner, Reggie (Daniel Kaluuya), are SWAT-team specialists who, in the movie's first scene, raid a house whose walls are filled with corpses, anonymous victims of the cartel who died horrible deaths before being sealed between layers of drywall. Two agents died in the raid, and payback is among Kate's motives. She wants to get the guys responsible for killing her co-workers, she tells the guys responsible for the new task force.

It's not so simple, though. Her boss (Victor Garber) hands her over to a jaunty supervisor, Matt (Josh Brolin), whose organizational affiliations are unclear. (DOD? CIA? Something else? Are flip-flops human decency. As Alejandro suggests late in the film, there are no good guys and bad guys in this world, only packs of wolves competing for territory and dominance. Sicario suggests that U.S. government authorities are one such pack, acting not in the name of justice or security but rather of expediency and order. The idea that the war on drugs might be won is not something anyone takes seriously. The only question is how the forces are aligned and who is enforcing the rules of engagement.

Recent Mexican films - including fictional features like Amat Escalante's Heli and a number of brave and powerful documentaries - have examined how the drug trade and the power of the cartels have affected all aspects of life there. A subplot in Sicario concerning a Sonoran police officer and his family gestures in that direction, yet the film stays mostly in shallow action-thriller waters. Blunt is impressively glum and intense, but Kate is a bit of a blank, on hand as a filter through which the audience can scrutinize Matt and Alejandro, who are far more intriguing characters.

Though maybe not quite intriguing enough. Villeneuve conjures an atmosphere of menace and pervasive cruelty, but after a while Sicario starts to feel too easy, less an exploration than an exploitation of the moral ambiguities of the drug war. We glimpse mutilated bodies hanging from bridges, hear stabbings and shootings just out of sight and study the face of a man whose family is being killed in front of him. But after a while these sounds and images start to feel like expressions of technique, and they become at once numbing and sensational, and instead of a movie about violence we're watching another violent movie, after all.