The busy, silly script allows McCarthy to be her own best sidekick 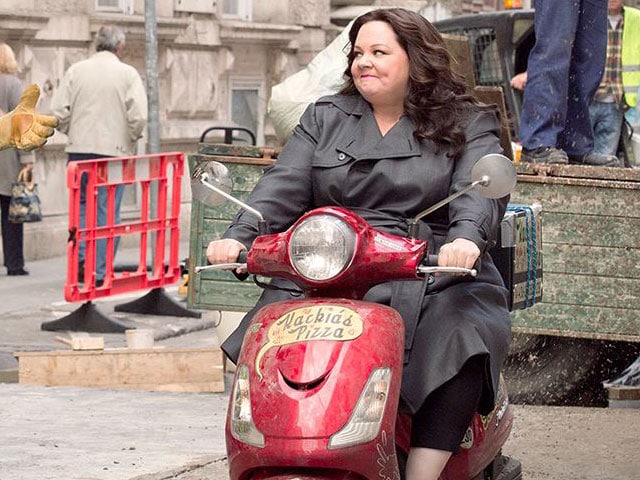 In Spy, a wild, profane, surprisingly bloody caper-comedy, Melissa McCarthy appears on screen with various sidekicks, nemeses, foils, straight men (and women) and human punching bags. Among them are Jason Statham, Jude Law, Allison Janney, Bobby Cannavale and Rose Byrne, who are accomplished and by now fairly well-established banterers and counterpunchers in their own right. Even better - and less familiar - are Peter Serafinowicz and the marvelous Miranda Hart (Chummy to all you Call the Midwife fans out there) as two of the unlikelier CIA employees in recent cinema.

But this movie, written and directed by Paul Feig, is very much McCarthy's show, a potential franchise built around her talents and her proven audience appeal. When The Heat (also directed by Feig) was released a few years ago, I complained that its threadbare genre elements made it a less-than-perfect vehicle for its newly fledged star. That film's box-office mileage suggests that I may have been wrong, and even though Spy is similarly engineered to be easy, forgettable fun, it is likely to be a big hit.

And why not? The busy, silly script allows McCarthy to be her own best sidekick, in effect an entire sketch-comedy troupe unto herself. She starts out as Susan Cooper, a mousy, cheerful desk jockey at CIA headquarters where, despite her training and her status as a full-fledged analyst, she is ignored and belittled. Her job is to be the eyes and ears of Bradley Fine (Law), a glamorous would-be 007 who relies on Susan's expertise and toys with her feelings.

Susan is anxious, awkward and eager to please, her intelligence and competence in perpetual struggle with her low self-esteem. Once in the field, though, she undergoes a transformation that is all the more entertaining because it doesn't quite make sense. Rebelling against the typecasting of her undercover identities - a Midwestern cat enthusiast, a bedraggled single mom - Susan reinvents herself as an elegant espionage artiste. Instructed to observe and report on the doings of a Bulgarian arms dealer (Byrne), she goes rogue in every imaginable way and proves herself adept at fighting second-string femmes fatales and random dark-suited minions, as well as flying planes and conducting high-speed chases through European cities.

Along the way she tangles with Statham's character, an arrogant peacock who brags about exploits that sound like outtakes from Jason Statham movies. She also attracts the attention of Aldo (Serafinowicz), an amorous Italian who shows up every time Spy threatens to tilt too far toward the action end of the action-comedy spectrum.

This movie is fancier than The Heat or Bridesmaids - flush with high-end visual effects purchased on the strength of their success. And the big, hectic set pieces aren't bad, as long as the gunfire doesn't drown out McCarthy's floridly inventive insults and non sequiturs. There's an undercurrent of cheeky surrealism that sometimes pops to the surface: For some reason, CIA headquarters are infested with bats and mice; for some reason the rapper 50 Cent is in Budapest; for some reason Byrne is Bulgarian.

Even better is the blithe feminism that makes Spy feel at once revolutionary and like no big deal. It's not just that the movie aces the Bechdel test. It didn't even need to study. The movie isn't uplifting; it's buoyant. While Susan at first clearly has a lot to prove - that she's a skilled professional and a ruthless adversary, everyone else's doubts to the contrary - Feig doesn't make her proving it the central arc of the narrative. Instead, he highlights McCarthy's quickness and unpredictability, her genius for defying logic and decorum. She can be ridiculous and heroic, needy and scary, clueless and clever - in quick succession and sometimes all at once.