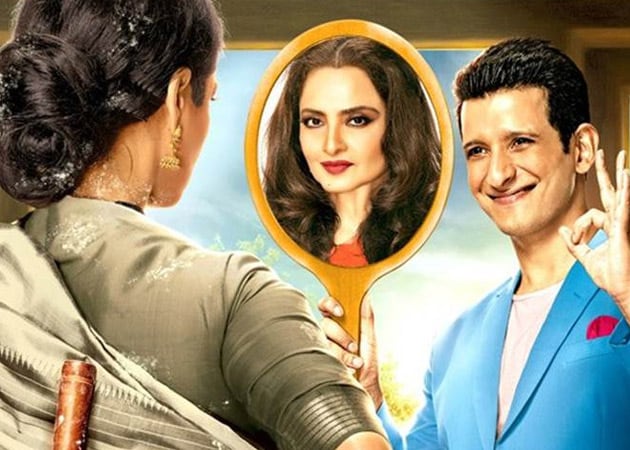 A preachy and mawkish drama about a woman neglected, scorned and tormented by her own oafish family, Super Nani makes its pro-women's empowerment statement with the finesse of a bulldozer run amok.

Adapted from a Gujarati play (Baa Ae Maari Boundary by Imtiaz Patel), Super Nani crams in all that was obnoxious in the worst Bollywood melodramas of the 1990s.

The dialogues are cringe-inducing, the acting is abysmally bad, and the narrative is riddled with laughable situations that have clearly been bunged in simply to heighten sympathy for the doormat who lets all and sundry trample all over her.

The casting of the ageing but still-riveting Rekha in the pivotal role actually works against this mess of a film.

Her presence on the screen raises expectations to unrealistic levels. It is completely beyond the skills of co-producer and director Indra Kumar, he of the Dhamaal and Masti romps, to measure up.


This isn't after all the Indra Kumar of the Dil and Beta days, when he could turn even pedestrian romantic and family dramas into commercially successful fare.

Super Nani starts at the very bottom of the pit and that is where it stays all the way through.

Instead of adding any elevating power to the aimless proceedings, Rekha looks utterly befuddled by the mindless mayhem that is unleashed around her by a quartet of unconvincing characters who rave and rant at the very sight of her.

The all-suffering Bharati Bhatia, who shuttles all day long between the kitchen and the dining table like an automated drinks trolley, allows herself to be pushed around without a squeak.

She lets her boorish husband (Randhir Kapoor) hurl insults at her and shower his affections on a coquettish business associate (Varsha Usgaonkar).

She even goes to a television producer to beg for a role for her foul-tempered daughter-in-law (Shreya Narayan).

A loutish son (Rajesh Kumar) treats her like dirt but she takes all his disdainful jibes in her stride.

Her frisky daughter (Anchal Dwivedi), too, snaps at her every time she suggests a suitable match for her.

Leave the children alone and let them lead their own lives, her husband hollers at her. She does not so much as register a mild protest in response.

The bamboozled woman's life begins to change for the better as the young man demonstrates to her that she is worth much more.

With the help of a fidgety and fast-talking ad agency head, Sammy alias Bamboo (Anupam Kher), who turns out to be Bharati's schoolmate from Patna and the support of a pretty neighbour (Shweta Kumar), Mann starts his granny off on a new career that quickly turns the lady into a much in-demand fashion and product model.

The second half of Super Nani progresses along predictable lines as Mrs Doormat-turned-Durga strikes back with all her might and the members of her family that once rode roughshod over her are reduced to begging for mercy.

The moral of the story: do not take the kindness of a wife/mom/mom-in-law/granny for granted.

The screenplay (Vipul Mehta) delivers that hackneyed message with dollops of unalloyed twaddle about the stupidity of men and women who trifle with the emotions of those that love them.

Super Nani takes upwards of two hours to articulate something that all those weaned on Bollywood potboilers have known for ages. While doing so, it ratchets the decibel levels up to breaking point.

Rarely has so much noise on a film soundtrack added up to so little.

To put it simply, Super Nani is a super bore.