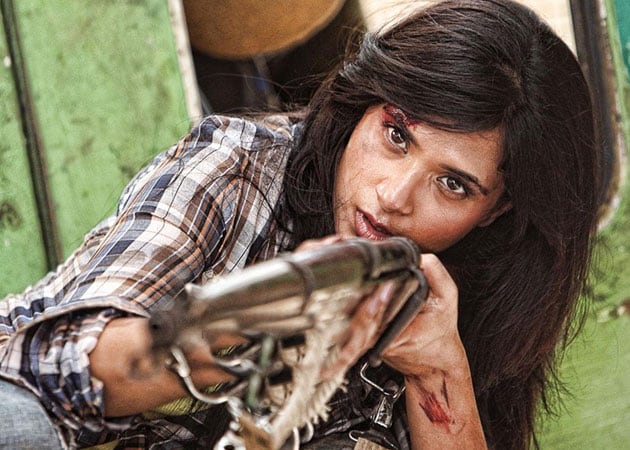 In more adept hands, a thriller peopled by a two-timing gangster?s moll, a spiky small-time crook on the run from the law and a cranky Haryanvi muscleman might have been an enjoyably zany ride through the dark alleyways of the Delhi underworld.

Tamanchey falls way short of the mark. A stodgy and aimless noir drama, it is a rusty gun that fires noisy blanks without making any impact at all.

The reason is obvious: the film?s makers are like a bunch of over-ambitious swimmers who?ve never been in a pool before but have ill-advisedly set out to cross the Strait of Gibraltar.

The result is inevitable disaster: they do not get very far.

Tamanchey makes terribly rough weather of a wafer-thin plot that plumbs the depths of outright inanity.

At the film?s heart is a deadly liaison between two outlaws who have nothing in common bar a life of crime.
Tagged to this vapid tale about living dangerously is a predictably contrived moral rider: those that live by the gun must die by the gun.

In the end, Tamanchey is about as edifying as a mud wrestling bout with a drugged gorilla.

The insipid screenplay throws up nothing that could justify its existence. So, despite clocking less than two hours, Tamanchey feels like a never-ending film.

The only commodity that it has no dearth of is directors. Producer Suryaveer Singh Bhullar is billed as ?creative director?, while Navneet Behal is the ?visual director?, whatever on earth that means.

You do not need too many to spoil the broth. Two are bad enough. The mystifying splitting of directorial responsibilities yields no benefits. Tamanchey has absolutely nothing new to offer either creatively or visually.

To add to the chaos, the film has also has a separate ?song director?. No wonder Tamanchey pulls in different directions in every which way.

The music is a ridiculous hodgepodge of sounds. On one hand, it falls back on a retro RD Burman number ? Pyaar mein dil pe maar de goli (the line is actually a part of the film?s title).

On the other, a Punjabi rap routine that has no logical connection with the characters or their stories is bunged in as accompaniment to a string of bank heists pulled off by the lead duo.

First up we meet two criminals ? the feckless Munna (Nikhil Dwivedi) and the reckless Babu (Richa Chadda) ? being transported to an unspecified location in a police van.

The vehicle careens off a hilly road and plunges into a gorge. The two captives survive the mishap and make a dash for freedom.

Even as they dodge the cops, they do not for a moment look or act like frightened fugitives. They strut around like a pair of tourists on a joyride.

Notwithstanding the lack of suspense and surprise in the initial 30 minutes of the film, the chance coupling of the diffident Munna and the glib Babu does raise hopes that this could be a tolerable road movie.

But the promise of a half-decent entertainer evaporates quickly when the two, after a drunken roll on a bed of squishy tomatoes, are separated.

The girl returns where she belongs ? the lair of the dreaded gangster Rana (Damandeep Sidhu).

The madly-in-love boy pursues her all the way to the mafia don?s home and conspires to wean her away from under the wrestler-turned-drug peddler?s nose.

Eventually there is little more to the Tamanchey love story than tiresome, empty-headed games played by half-baked characters against an inchoate urban backdrop that never comes alive.

This hackneyed tale of a trio of law-breakers who struggle to keep out of harm?s way only to discover that crime does not pay has no clear sense of place.

The action purportedly pans out in Delhi, but the city never becomes an integral part of the narrative although it is mentioned by name on several occasions.

The lack of conviction is aggravated by the embarrassingly erratic quality of the acting, which ranges from the unduly over-enthusiastic to the awkwardly half-hearted to the totally clueless.

Richa Chadda, coming off a string of well-received screen performances, is completely off-colour here. There is far less meat in the role than she imagines.

It is easy to see that theatre actor Damandeep Singh Siddhu is a confident and competent performer. But those two attributes are wasted here.

The hero admits at one point that the femme fatale he has fallen for is ?zehar?. He could have been speaking for the film as a whole.