If Ranbir is exhilarating in scenes and situations that tap his versatility, Deepika is sure and steady even when the spotlight isn 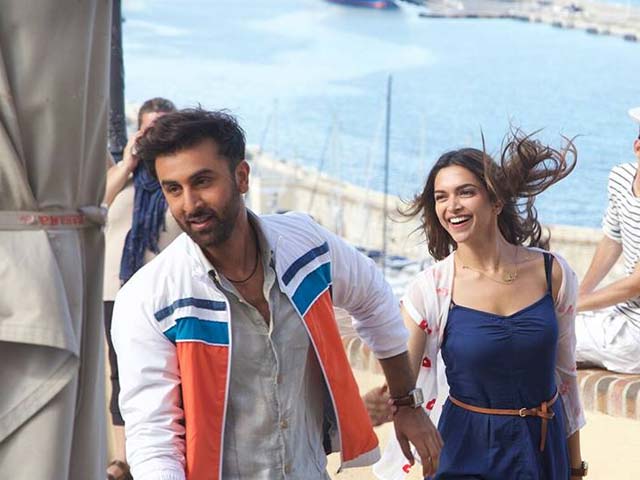 An off-the beaten track love story that does not go far enough with its surprises, Imtiaz Ali?s Tamasha is a film that flatters to deceive.

It rolls along smoothly, but so facile are its placid twists and pat resolutions that they cause nary an emotional ripple.

It is a pretty film, thanks to cinematographer S Ravi Varman?s lighting and camerawork.

Every frame is picture-perfect. And Ranbir Kapoor and Deepika Padukone are on top of their game.

Added to that are an intelligently elliptical narrative, imaginative use of songs and occasional bright spots. Yet, Tamasha is disappointingly inert and unexciting.

Its overly simplistic fairy-tale construct ? creative and free-spirited son versus pragmatic and domineering dad ? is given a gender-reversal spin.

Tamasha isn?t the story of a Prince Charming who rides in on a handsome steed to rescue a beautiful princess in captivity in a towering turret.

Instead, the yarn that it spins is about a gifted young man weighed down by the pressures of expectation.

His dreams of being a storyteller are cruelly crushed and he is pushed by his father (Jawed Sheikh) into the domain of mathematics and management.

A mystery woman emerges from nowhere to help the hopelessly trapped dreamer to escape from the morass of a life he did not choose.

The supporting characters stay in the background, making Tamasha essentially a two-hander that is well served by the lead pair and their crackling chemistry.

But while the male protagonist has a clear back story, the heroine doesn?t. As a result, this tale about the therapeutic power of love and the magic of dreams seems rather lopsided.

The tussle between a man and his mask might have been far more engaging had Tamasha focused more on the layers of a life gone awry, instead of staying rooted to just one facet of it.

Fleeing the drudgery of his corporate life, the boy (Ranbir Kapoor) meets the girl (Deepika Padukone) in faraway Corsica.

The girl has been drawn to the French territory by her fondness for the comic book Asterix in Corsica.

However, why the boy has chosen this exotic location for a getaway isn?t clear. He is in the middle of reading Joseph Heller?s Catch-22, which of course reflects the current state of his mind: all jumbled up.

To make the most of the freedom that complete anonymity gives them, the duo playacts with each other, hiding their identities and backgrounds from each other.

On day one, they make two promises to themselves: no jumping into bed and no speaking the truth.

He introduces himself as Don on the trail of bad guy Teja. She responds by calling herself Mona Darling.

Movie allusions pop up all through their first encounter, leading to a long passage in which Don turns into an Interpol agent who talks and walks like Dev Anand.

It isn?t until much later in the film that the audience discovers who they really are ? Ved Sahni from Shimla and Tara Maheshwari from Kolkata.

A week of aimless fun and frolic in the Corsican sun ? during which the young couple keep their hands off each other ? ends soon enough.

The lady, who is some sort of a tea company official, is summoned back to India and she leaves after a quick parting kiss.

As a group of singers belts out Heer Toh Badi Sad Hai, Tara lands in Kolkata.

Before the song ends, four years have elapsed and she heads to Delhi in search of the man who had swept her off her feet.

In Delhi, she is in for a huge setback. The guy she meets is a pale shadow of the footloose and fun-loving Corsican tourist.

Ved Vardhan Sahni, product manager in a telecom firm, is staid, chivalrous and accustomed to an unchanging regimen. He is a typical average man happy to achieve his targets.

The rest of the story revolves around a rejection of an engagement ring. It triggers heartburns and unseemly outbursts before culminating in introspection and course correction.

Tamasha is a spectacle all right, but many of the elements that constitute it strain credulity.

Why, for instance, would a guy whose ambition is to be a storyteller and who grows up on mythical tales from far and wide told by an old raconteur be so in awe of Bollywood dreamscapes?

And why on earth should the characterization of the winsome catalyst who walks into his life and pulls him out of a trough be left dangling in a haze?

If the idea was to enhance the enigma of the girl, it really doesn?t work? The figure of Tara Maheshwari deserved better.

Be that as it may, Deepika Padukone gives the role all she has and the result is salutary.

In a film that belongs essentially to a superb Ranbir Kapoor, Deepika does not let the screenplay shortchange her.

If Ranbir is exhilarating in scenes and situations that tap his versatility, Deepika is sure and steady even when the spotlight isn?t on her and she is reduced to playing second fiddle.

Tamasha is at best a one-time watch because of the sparkle the leads lend to it. It could have been so much more.