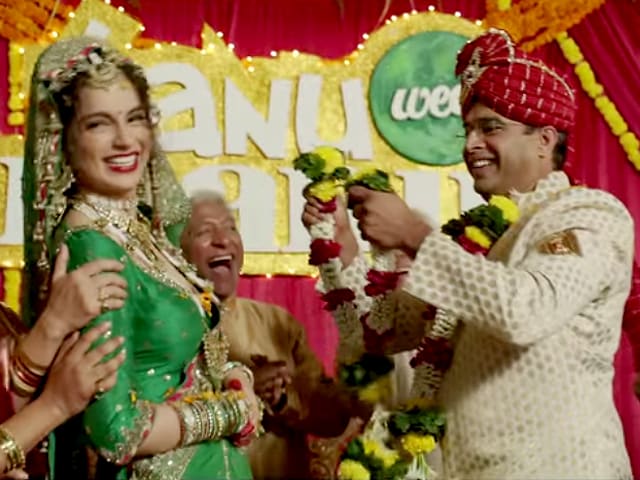 Notwithstanding the stray false notes that the film strikes, especially in the run-up to the climax, it is a bright and breezy romp that draws sustenance from its droll dialogues, outstanding cast of actors and all-round jollity.

The film hits the ground running, cruises along like a song until its final moments, where it comes close to losing its way just a tad.

But one leaves the auditorium with a smile on the face, having witnessed the misadventures of an array of flawed but loveably high-spirited characters who thrive on confusion.

Yes, it's frothy, but this is fluff that is rooted in recognisable and relatable settings.

In Himanshu Sharma's busy screenplay, little nuances of culture and language - which obviously vary wildly from the bylanes of Kanpur to the precincts of Delhi University to the rustic ambience of Haryana - are underscored with love, care and precision.

So ominous threats are made by some quarters, but nobody whips out a gun or goes for the kill or hurls ugly invectives.


This is infinitely more velvety than the much-hyped mess that we were subjected to last week.

Tanu Weds Manu Returns, which takes off exactly from where its 2011 predecessor left, exudes an air of welcome freshness. For the most part, the film eschews excess.

The stage for the comic rigmarole is set by a preliminary sequence staged in an ante-room of a British mental asylum where Tanu and Manu, now wedded for four desultory years, have a go at each other like a pair of Kilkenny cats.

Their marriage is on the rocks and the love that brought them together against all odds has evaporated.

Launching a broadside at Manu, Tanu accuses him of being devoid of any spark. I am not a lighter, he retorts.

Manu, on his part, complains to the psychiatric counsellor that Tanu suffers from bipolar disorder and has hormonal issues. She is too moody and demanding, he asserts.

The unseemly fracas ends in an insane-with-rage Manu being dragged away by the asylum attendants and placed under observation.

Tanu calls Pappi (Deepak Dobriyal) to head to London and rescue his friend while she flies back to Kanpur.

Kangana Ranaut, in a magnificently effective double role, powers the comic drama forward with an effortless act that requires her to embody two diametrically divergent faces of Eve in small-town India.

Tanu Weds Manu Returns vindicates the general belief that Kangana is currently in a zone where she can do no wrong.

On one hand she is the bubbly and recklessly rebellious Kanpur girl Tanuja Trivedi alias Tanu who walks out on her "boring" London doctor-hubby Manu Sharma (R Madhavan) on a whim and returns to her hometown.

On the other she embodies the no-nonsense persona of Kusum Sangwan alias Datto, the feisty sports quota Delhi University student from Jhajjar who is a carbon copy of Tanu but for her buck teeth, pixie bob and unalloyed Haryanvi diction.

The actress fleshes out this pair of distinct individuals with such energy and finesse that it becomes difficult at times to tell that it is the same actress playing the two roles. In one word, astounding.

Caught in this Seeta Aur Geeta scenario, the good doctor from Blighty falls for Kusum on the rebound, but he runs into pretty much the same obstacles that he had encountered the first time around.

It isn't just strongman Raja Awasthi (Jimmy Shergill) who is standing in his way once again. He now also has a flummoxed and fuming estranged wife to contend with.

Director Aanand L Rai and his writer Sharma have added two additional characters to the mix.

One is street-smart neophyte lawyer Anand Kumar Singh (Mohd Zeeshan Ayub), who develops a crush on his first client Tanu and, in the bargain, runs afoul of a livid Raja.

The other is Kusum's brother Om Prakash Sangwan (Rajesh Sharma), who has broken away from his conservative family because he doesn't get along with them.

It is he who intervenes in the nick of time to save Manu and his madcap pal Pappi (Deepak Dobriyal) from becoming unsuspecting victims of an act of honour killing.

Kangana overshadows all else. But that is not to say that Madhavan is put in the shade. He knows exactly how to underplay his part so as not to get in the way of the film's intended emphasis.

Swara Bhaskar, reprising the role of Tanu's friend who is now the mother of an IVF baby, does not have much footage to play around with. One wishes she did, for here is an actress who has the chops to deliver more.

Deepak Dobriyal is a fine actor, too, and he has the funniest lines in this film. But there are occasions here when the temptation to overact gets the better of him.

These little quibbles apart, Tanu Weds Manu Returns is as entertaining and engaging a film as any that Bollywood has delivered this year. Do not miss it.