Terminator Genisys: This Is Your Father's Terminator. Truly. 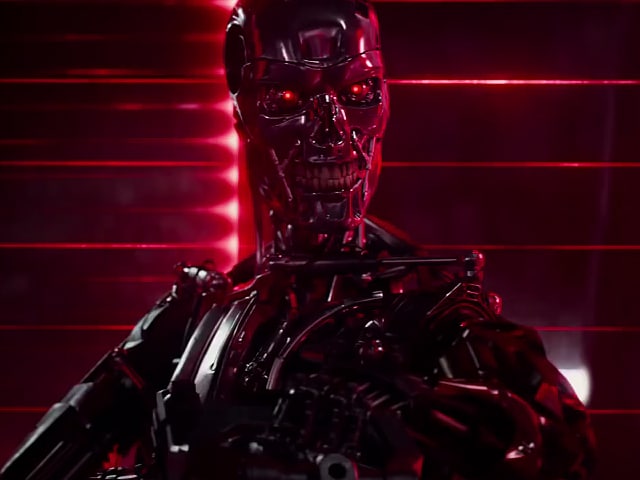 In a scene in Terminator Genisys that's on heavy rotation in the movie's ads, the old Arnold Schwarzenegger goes up against the new. The older version has the smoothly pampered skin of the best beauty treatments that Hollywood money can buy, with scarcely a visible line etching his sharply angled and ironed facial planes. Now, though, the new movie's cyborg has abruptly come deadpan to deadpan with an unlined, recently minted identical twin that, like the original Terminator in 1984, has entered without any clothes. It's strange to see Old and Young Arnold go at it, their refrigerator-size bodies slamming against each other in what plays like an intimate existential clash.

From the moment Schwarzenegger entered The Terminator, that science fiction fantasy became a pop-cultural classic, partly because of his title performance as a killing machine from the future. The movie made the bodybuilder-turned-actor a Reagan-era star, one who rose to improbable heights. Fewer movie entrances now seem more providential than that of the Terminator, who materializes in an Atlas crouch, unfurls his nude body in all its tumescent splendor and strides over to a panorama of Los Angeles. There, he flashes a city that his cyborg will soon invade on the screen and that the actor would later oversee off screen as the governor of California. And now Schwarzenegger, 67, is, yes, back, because while the series thrill is lamentably long gone, franchises now apparently last forever.

The series has so deeply bored into the popular imagination that it makes a recap of the latest one feel almost superfluous. Once again, there are special effects, muscles and explosions, boomity boom boom. And, as before, the machines that rule the future, having overthrown humanity, are trying to kill Sarah Connor in 1984 before she gives birth to her son, John, who will lead the human resistance. Played with swelling biceps and enjoyably bad attitude by Linda Hamilton in the first two films, Sarah here hits as hard as a Kewpie doll, what with the casting of Emilia Clarke. Best known as the underdressed dragon wrangler on "Game of Thrones," Clarke has swapped out fire-breathers for Schwarzenegger's rather less threatening robot dad.

The Terminator character was only part of the great fun of the first movie, which was written and directed by James Cameron back in his lean years. A science fiction fan and a graduate of the Roger Corman school of inventively discount filmmaking, Cameron stretched his budget of $6 million or so to remarkable effect in The Terminator, particularly with the creation of a cyborg that's by turns seemingly invincible yet uncannily humanlike. This paradoxical condition pulls you to this retooled Frankenstein's monster, only to throw you off when the cyborg reveals its identity by performing surgery on its eye with a utility knife, a shocker that draws on Harlan Ellison, Mary Shelley and "Un Chien Andalou," Luis Bunuel and Salvador Dali's Surrealist eye slicer.

By the second movie, the Terminator had switched sides and was aiding the human resistance. It has been doing the same ever since, to the point that in Genisys, it has mutated into a blockbuster version of the Tin Man, a machine that accompanies a dystopian Dorothy down a hairpin road with various friends, while chased by digital-age equivalents of screaming monkeys. The largely still impassive, still mighty Schwarzenegger remains the franchise's greatest attraction and most-special effect, even if he sometimes brings to mind one of those gruffly lovable geezers that older stars can't resist playing so they can keep basking in our adoration. It's a performance edged in nostalgia, though if your eyes mist when he utters his famous tagline, it will mostly be because - as in that scene with the dueling cyborgs - this movie foolishly keeps invoking the first film.

That's an obvious mistake, simply because you end up toggling between memories of Cameron's kinetic original while watching this latest reboot lurch from one narratively clotted turn to another. The director, Alan Taylor, has racked up loads of credits in cable TV, but his work here is disappointingly flat, even in the intimate exchanges between Emilia Clarke and Jai Courtney, who's been similarly miscast as Kyle Reese, Sarah's protector and sparring partner. It's too bad that Jason Clarke - who plays John Connor and gives the character a visceral intensity of both a war-front warrior and a revolutionary on fire - isn't in more scenes. It's amusing to see identical Arnolds clash like titans, but nobody here seems to have fully grasped that they had another heavyweight in Jason Clarke.