The film needed much more tevar in order to pass muster 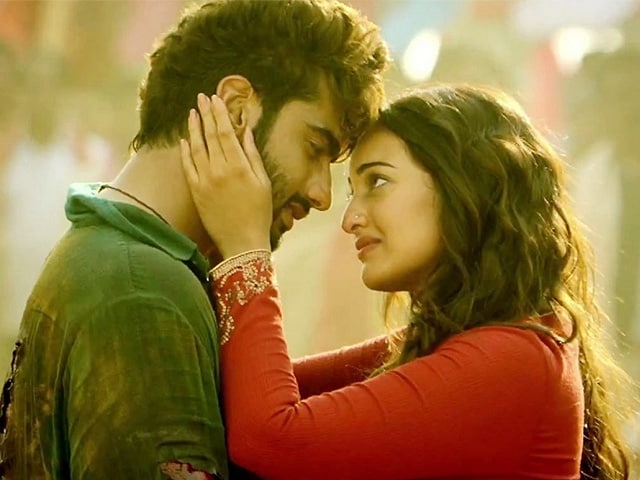 A pretty college-going girl catches the fancy of a Mathura politician's vicious brother. The latter wants to marry the girl, and like all self-respecting Bollywood baddies, will not take no for an answer.

An Agra boy, no mean street-fighter himself, unwittingly gets in the way of the goon's evil designs. Like all Hindi movie heroes, he will not back off once the die is cast no matter how dangerous it is.

In the maddening mayhem that ensues, a riot of masala ingredients is willy-nilly hurled into the pot. So far so good.

A well-meaning drifter, a beautiful damsel in distress, an evil man and a pulpy plot that throws them into conflict with each other could have added up to some harmless lowbrow entertainment of the kind that often yields instant box office returns.

But Tevar lacks the punch that separates a true humdinger from a weak wannabe. It is in the stirring and the boiling that the makers of this film get it all wrong.

Tevar is insipid, a film that is more fizzle than sizzle, with too much gratuitous violence marring the broth.

The overlong drama takes ages to come to the point, and when it does only a few minutes before the halfway mark it loses all potential for springing any surprises.

Tevar , despite the presence of an unbeatable and unstoppable kabaddi champ at the centre of the plot, isn't a thrilling encounter. The game ends as tamely as it begins.
First-time director Amit Ravindernath Sharma leaves far too much to the Agra-Mathura landscape to salvage.

The Taj Mahal looms into view every now and then, but the monument of love that has stood the test of time like little else in the world cannot conceal the fact that Tevar is as stale as an idea filched from a decade ago.

The Tevar plot is literally that outdated. It is a regurgitation of a Telugu hit from 2003 (the Mahesh Babu starrer Okkadu ), but what worked back then can only look utterly old-fashioned and laboured in 2014.

The most interesting character in Tevar is the villain, not the least because of the measured manner in which the ever-dependable Manoj Bajpayee fleshes him out.

He answers to the name of Gajendra Singh and is a vile hitman who is always one desperate act away from becoming an embarrassment to his home minister brother Mahendra Singh (Rajesh Sharma).

He espies Radhika (Sonakshi Sinha) at a dance performance and falls head over heels for her.

Gajendra admits to the girl that his heart is a "metal scrapyard", but given a chance it could be a "rose garden" too. But the girl summarily spurns his advances, besides the scooter that the ruffian offers her as a gift.

And then the inevitable happens. The hero, Pintu Shukla (Arjun Kapoor), on a brief trip to Mathura, walks into an abduction scene and springs into action and rescues Radhika from the clutches of Gajendra and his men.

The rest of Tevar is one long chase, with the young couple on the lam and the crooks in pursuit playing a very violent form of hide and seek.

It isn't much fun because eventually it is a game of kabbadi that is destined for a drab and predictable finish.

Arjun Kapoor is always likeable on the screen, but the rugged persona that he assumes here - a combo, in the character's own words, of Rambo, Terminator and Salman Khan - is not up his street.

The I am Superman, Salman ka fan act just doesn't work for him.

Sonakshi, who does pretty much what she has been doing in the kind of action-oriented films that have become her forte, is hard pressed to rise above the din.

Tevar is somewhat tolerable only as long as Bajpayee is on the screen, or when Raj Babbar, as the hero's police officer-father, and Subrat Dutta, as the villain's principal henchman, are allowed to do their bit.

That apart, the only meaningful attitude (tevar ) that is visible in Tevar is inevitably exuded by the Taj Mahal framed impressively by cinematographer Laxman Utekar.

The film needed much more than that in order to pass muster.