The Best of Me: After 20 Years Apart, Reunited, in a Way

The only thing The Best of Me really wants is to weave a teary-eyed romantic spell by any means necessary. 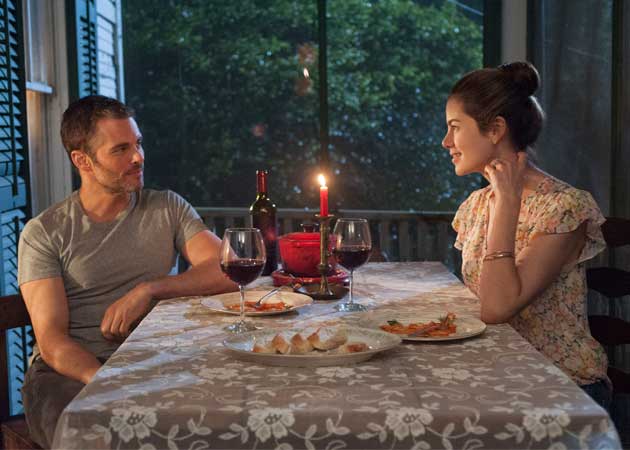 In the latest weepathon from the Nicholas Sparks suds factory, the star-crossed lovers in The Best of Me, in the years they are apart, detect signs every so often that they share a mystical, spiritual bond.

Reconnecting after a 20-year separation, Dawson Cole (James Marsden) and his childhood sweetheart, Amanda Collier (Michelle Monaghan), discover that although they were separated by geography, they listened to the same song at the same time, while dreaming of each other.

And, on two occasions, when Dawson is near death, a vision of his sweetheart appears to him. Dawson has a habit of gazing up at the stars and musing out loud about destiny. And Marsden, still a perfect specimen at 41, has the pinwheeling blue eyes that signal infinite depths of feeling. Monaghan does not have the same light in her eyes, and the performance by this usually reliable actress is stiff and guarded.

The two come from opposite sides of the tracks in a small Louisiana town. Dawson?s glowering father and siblings are dentally challenged, gun-toting hillbilly roughnecks who viciously abuse the sensitive Dawson. Amanda is from a ?good? family, and her disdainful father offers to pay for Dawson?s college education if he breaks off the relationship.

The young Dawson (Luke Bracey) and Amanda (Liana Liberato) look and act nothing like their grown-up selves. When they meet again, she is unhappily married, with a teenage son, and he has been working on an oil rig after serving time for an accidental shooting. What brings him home is the reading of a will after the death of his avuncular mentor and guardian angel, Tuck (Gerald McRaney), the movie?s omniscient commentator.

But enough about the plot, of which there are yards and yards, none of it particularly believable or compelling, except in the most generalized way. The only thing The Best of Me really wants is to weave a teary-eyed romantic spell by any means necessary. The screenplay is so haphazardly constructed that when the movie seems to be ending, it refuels with preposterous new developments.

The teenage girls sitting around me at the screening, who had sighed wistfully at the lovers? first kiss, eventually lost patience and began to giggle. Even the movie?s target audience recognized when The Best of Me became too much of a bad thing.