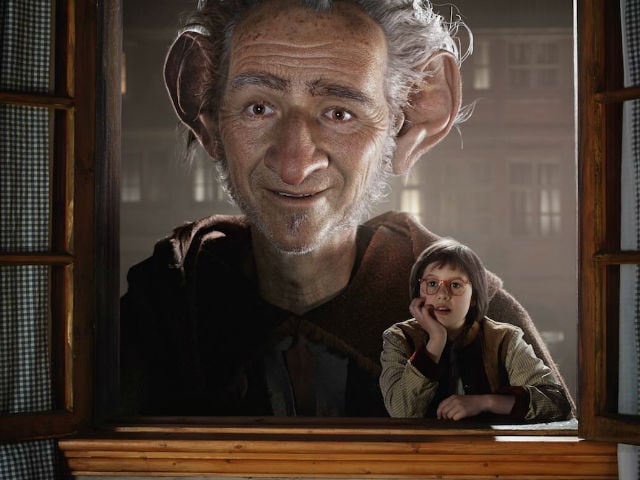 Add Amitabh Bachchan (as the Bhojpuri voice of the benign giant of the title) to that array of redoubtable talent and you complete the recipe for a true marvel.

The BFG is, to use a Gobblefunk word, a 'gloriumptious' movie experience.

Spielberg puts a compelling spin on Dahl's much-loved children's fable adapted for the screen by the late Mathison (this is the E.T. writer's final work; she passed away in November last).

While Bachchan's baritone blends nicely with the spirit of the central character, The BFG's Hindi version suffers a tad because transliterating Dahl's language in India's rashtra bhasha is a big, big ask.


Rylance, one of the finest stage actors in the world today, fills the affable giant, big-hearted giant with deep humanity, using his phenomenally malleable face and ethereally expressive eyes to scintillating effect.

Some of the verve ingrained in The BFG goes missing in the Hindi dub simply because Rylance's voice has been taken out of the equation.

The fault certainly isn't Big B's. His marvellously modulated voice does its bit to endow the 'big friendly giant' delightful vitality and sustained emotional strength. It is the language that lets him, and the film, down.

Snozzcumber, the hideous-looking, foul-smelling vegetable that BFG eats, becomes kakkarbhooja, while kakkare sharbat denotes frobscottle, the fizzy drink that helps the giant wash down his meal.

Similarly, crocodowndillies (crocodiles) is rendered as agarmagarmach and hippodumplings (hippopotamuses) as hippo motalo. Amusing and alliterative yes, but not quite as impactful as they sound in original Dahl-speak.


The linguistic transference does not, however, take anything away from the magic and sheer grandeur of Spielberg's sweeping live action adaptation of a popular story that was brought to the screen only once before - in an acclaimed 1989 animated film by Brian Crosgrove.

Spielberg's The BFG is good old-fashioned storytelling of the kind that made the director such an unstoppable showbiz force in the 1970s and 1980s.

He is, at 69, still a filmmaker who can deliver infallible blockbuster cinema informed with childlike awe and wonder. The BFG is proof enough.

Coming off three solemn films that dealt with history, war, politics and espionage - War Horse, Lincoln and Bridge of Spies - the director conjures up a world where dreams float in glass jars before being blown into the heads of sleeping people.

Spielberg underplays the sinister, subversive aspects of Dahl's tale and settles for a beguiling, unwaveringly warm tone that serves the film well.

He blends live action with sparkling stop motion and CGI wizardry to deliver a gob-smacking visual treat that is, to employ Dahl again, is both phizz-whizzing (brilliant) and jumpsquiffling (colossal).

Ten-year-old Sophie (Ruby Barnhill, Hindi voice: Parineeti Chopra), who cannot sleep for she is an insomniac, is whisked away from a London orphanage by a 24-foot giant (Mark Rylance, Hindi voice: Amitabh Bachchan) to Giant Country.

The girl catches the giant's attention when she sees the towering figure in the surreptitious act of traipsing down the streets of the city and sending dreams into bedrooms.

His secret is in danger of being revealed to 'human beans', so he kidnaps Sophie.

Petrified at first, Sophie quickly figures out that the behemoth is a benevolent creature who himself has a tough time with his fellow giants, nine of them, who are double his size, infinitely more aggressive and wicked,

The worst of the lot is Freshlumpeater (Jemaine Clement, Hindi voice: Gulshan Grover), a cannibal who smells blood and is bent upon turning Sophie into his next lunch.

Unlike the 50-feet man-eating ogre, BFG - that is the name that Sophie thinks up for her unlikely friend - is pure vegan.


The two loners develop a bonding that yields a rather thinly-plotted adventure that ends in a spectacularly entertaining climax in Buckingham Palace, from where the Queen of England orders a strike on the giants.

The BFG has a long passage in the middle that is slow and serene as Sophie and the BFG chat about this and that - babblement (another word drawn from Dahl's dream-world lexicon) - that isn't always interesting.

The film's fart jokes, which are linked to the giant's fizzy drink whose bubbles flow downward and trigger mega-methane release from the innards of giants, humans and canines alike, deliver more than just noise. They yield laugh-out-loud moments.

The BFG works because of the sociability that the big-eared, sad-eyed giant and his little 'human bean' friend, who is spunky and vulnerable by turns, generate.

The film is marked by joy and warmth, which is redoubled by the digitally captured performance from Rylance and the lively, wide-eyed stupefaction captured by debutante Barnhill.

Parineeti's voice may not always sound right for the 12-year-old British actress, but once the viewer gets into the flow of the film the mismatch does not get in the way.


One of the highlights of The BFG is Penelope Wilton in the role of the Queen of England who, with her trio of Corgis, significantly enhances the entertainment quotient.

The BFG has failed at the US box office but, thanks to its British story set in England, is faring infinitely better in the UK.

Will the Hindi version (and the Tamil and Telugu ones as well) augment the film's collections in India? It probably will.

There can be no denying that The BFG is a captivating family entertainer that delivers bushels of old world enchantment. Don't miss it.