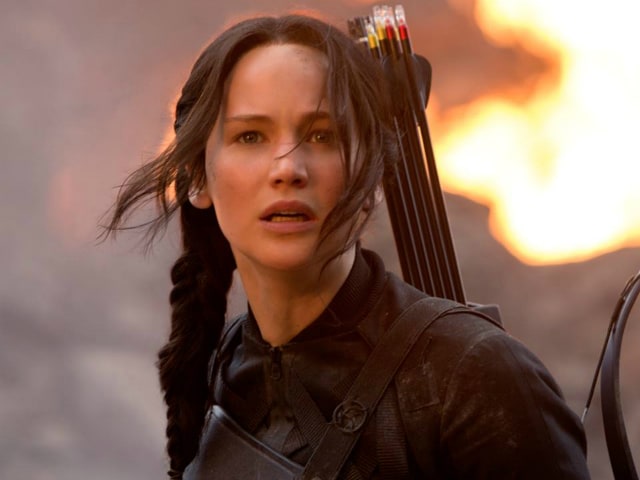 There's no risk that Katniss Everdeen, the warrior who has led the charge against oppression in The Hunger Games movies, can ever return to her current incarnation. Even if she and her world are rebooted back into franchise existence by a ravenous studio, her moment was now. Katniss, as played by Jennifer Lawrence over three years and four blockbusters, has evolved from a backwoods scrapper in the first movie into a battle-scarred champion and an exemplar of female power on screen and off - and the battles she's fought have extended far beyond the fictional nation of Panem.

So, yes, of course Katniss is back, just as promised by the clumsy title of her last movie, The Hunger Games: Mockingjay Part 1. In Part 2, she has returned as destined to finish the fight, defeat the enemy and send off a big-screen series that has had an astonishing run both in cold-cash terms and in its meaningful symbolism. She's ready. Since 2012, when the first movie landed, Katniss has grown into her role as a savior, an evolution that parallels that of Lawrence, who entered the series as a Sundance starlet and leaves it as one of the biggest stars in the world. Both have grown exponentially, rising to the demands of their loving audience.

And The Hunger Games has triumphed partly because it means so many different things to so many people. It's a story of war and peace, love and bullets, pegged to a girl-woman who fights for her family, her friends and the future. It's aspirational and inspirational, personal and communal, familiar and strange, and it speaks to the past as well as the present, sometimes unnervingly so. Suzanne Collins, who wrote the books, took her cues from reality television, the Iraq war, Roman gladiator games and the myth of Theseus and the Minotaur, and then filtered her influences through a heroine who embodies the adage that it's better to die on your feet than live on your knees. The result was a great character on the page and a transcendent one on the screen, where women tend to be sidelined or trapped in the virgin-whore divide.

If Katniss escaped that old binary it's because Collins created a character who exists outside the traditional confines of the feminine-masculine split, and because the movies have stayed true to that original conception. At once a hunter and a nurturer, Katniss is tough and teary, stoic and sentimental, which give her layers that reflect her changeable inner states as well as her public and private identities as daughter, sister, lover and leader. It's instructive that she's worn her most overtly glamour-girl outfits as part of the farcical role forced on her by the totalitarian government that rules Panem, having been dolled up with makeup and smiles for the televised sideshows that accompany the murderous games of the series title. She's since graduated to basic battle black or unisex clothing that's suggestive of a Dystopian Gap.

Part 2 more or less picks up where the last movie left off, with Katniss and the rest of the rebel forces closing in on the government and Panem's leader, President Snow (the invaluable Donald Sutherland, leading with an insouciant self-amused smile). There are no real surprises, though many familiar faces, some of whom (Jeffrey Wright and, more movingly, Philip Seymour Hoffman) flash by so quickly that they feel like guests who have popped in only to say goodbye. As with a lot of contemporary franchises, this one stocked the supporting roles with veterans who have given ballast to a largely unmemorable young cast, including the insipid twosome - Josh Hutcherson as Peeta and Liam Hemsworth as Gale - who have wanly bookended Katniss from the start.

Like the previous two movies, Part 2 was directed by Francis Lawrence who, like most franchise filmmakers, was not hired for the quality of his mise-en-scene but for one job: to not screw up an extremely valuable property. (The first was shepherded by Gary Ross, whose cinematographer, Tom Stern, alas, also departed the series.) And, so, mission accomplished, largely with a lot of conversational face-offs and regular bursts of showy violence that sometimes turn panoramic, allowing you to admire the scale of the apocalyptically dressed sets. To that instrumental end, the actors hit their marks while running and gunning amid the gray rubble and black ooze, although Lawrence does raise some nice shivers in a tunnel sequence, making the horrific most out of the dark.

Part 2 looks much like most contemporary dystopian future worlds, one that's by turns similar enough to ours to be reassuring and different enough to be diverting. What makes the material still feel personal - other than the yearslong investment and love that transform entertainments into fan communities - is the combination of Katniss and Jennifer Lawrence, who have become a perfect fit. Lawrence now inhabits the role as effortlessly as breathing, partly because, like all great stars, she seems to be playing a version of her "real" self. It's the kind of realness that can give you and the movie a jolt, as in a scene with Lawrence and a sensationally raw Jena Malone that thrusts it into that place where heroes and villains give way to something like life.

It's crucial to the conception of Katniss that most of the character's more emotionally plangent scenes have been with other women, including her family, friends and other Hunger Games combatants. Some of this can be chalked up to casting and, together with Lawrence, Malone, Natalie Dormer, Patina Miller and Michelle Forbes make one of the toughest groups of women to band together on screen since Quentin Tarantino's "Death Proof," his ode to exploitation cinema and its chicks. This series has had its share of robust male assistance (notably from Sutherland and Woody Harrelson), but it's been distracting and at times more than a little amusing that Katniss' love interests are played by the blindingly bland brotherhood of Hutcherson and Hemsworth.

Intentional or not, their casting ensured that in the movies, just as in the books, Katniss was never going to be upstaged by a love interest. "The Hunger Games" may have shocked readers and viewers with its child-on-child violence, but even more startling and certainly far more pleasurable has been the girl-woman at its center who can lead troops like a reborn Joan of Arc, yet find time to nuzzle the downy lips of her male comrades before returning to battle. Her desire is as fluid as her gender, whether she's slipping into froufrou, shooting down enemy aircraft, kissing a boy or taking a punch.

Unlike a lot of screen heroines, she has never settled into stereotype, which, despite the whole dystopian thing, makes her a lot like the contemporary girls and women watching her.

That has helped make Katniss the right heroine for these neo-feminist times, the you-go-and-fight girl who has led the empowerment charge at the box office and in the public imagination, often while slinging a bow and arrow borrowed from Diana, the Roman goddess of the hunt. It wasn't long before Katniss was making more like a latter-day Athena, the Greek goddess of war, even as this very human girl-woman was also suggesting a vibrant new take on the American Adam. You may not know the name, but you know the type: He's the hero whom the critic R. W. B. Lewis, in his 1955 study of 19th-century literature (and an "American mythology") described as being "emancipated from history, happily bereft from ancestry, untouched and undefiled by the usual inheritances of family and race."

However mythic this figure - individual, self-reliant, "fundamentally innocent" - the illusion of freedom he enjoys is meaningful, Lewis argues, because it makes for fiction capable of "profound tragic understanding" rather than hopelessness. Even inadequately, this Adam struggles because, as with his biblical namesake, "the world and history lay all before" him; by contrast, these lay all behind Katniss, who has endured history, violence and death. Yet she goes forth into her world because she too has an illusion of freedom, one which has spared us the nihilism polluting too many movies and has meant that she is neither Adam nor Eve but something else. And it is only by being this something else (not the Girl, not the Virgin or the Whore) that she has been able both to love and to fight, including against the big bad patriarch.

The success of The Hunger Games series has been itself, in its bottom-line fashion, a rejoinder to another intolerant regime, that of a movie industry that continues to treat women on and off the screen as a distraction, an afterthought and a problem. A few months into its run, the second installment, Catching Fire, became the first movie with a lone female lead to top the annual domestic box office in four decades. That's astonishing because it reveals the historical depths of the industry's inequities even while it speaks to the audience's embrace of this series. There are all sorts of reasons that viewers have flocked to these movies, including the studio hard sell, but I like to think the numbers prove that, in rallying to Katniss' side, they're also backing the other liberation struggle she has come to represent.