The Imitation Game: Broken Codes, Both Strategic and Social 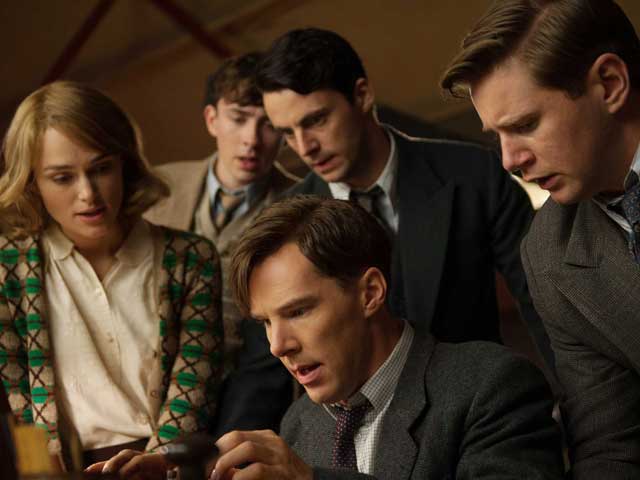 The Imitation Game is a highly conventional movie about a profoundly unusual man. This is not entirely a bad thing. Alan Turing?s tragically shortened life - he was 41 when he died in 1954 - is a complex and fascinating story, bristling with ideas and present-day implications, and it benefits from the streamlined structure and accessible presentation of modern prestige cinema. The science is not too difficult, the emotions are clear and emphatic, and the truth of history is respected just enough to make room for tidy and engrossing drama.

An Alan Turing biopic is, all in all, a very welcome thing. Chances are that you are reading this, as I am writing it, on a device that came into being partly as a result of papers Turing published in the 1930s exploring the possibility of what he called a ?universal machine.? His decisive contribution to the breaking of the Nazi Enigma code gave the Allied forces an intelligence advantage that helped defeat Germany, although the extent of his wartime role was kept secret for many years. The secret of his homosexuality was revealed when he was arrested on indecency charges in 1952, caught up in a Cold War climate of homophobia and political paranoia and subjected to the pseudoscientific cruelty of the British judicial system.

All of this is a lot for a single movie to take in, and The Imitation Game, directed by Morten Tyldum from a script by Graham Moore, prunes and compresses a narrative laid out most comprehensively in Andrew Hodges? scrupulous and enthralling 1983 biography. The film interweaves three decisive periods in Turing?s life, using his interrogation by a Manchester detective (Rory Kinnear) as a framing device. Turing tells the investigator - who thinks he is after a Soviet spy rather than a gay man - about what he did during the war. Later, there are flashbacks to Turing?s school days, where he discovered the joys of cryptography and fell in love with a slightly older boy named Christopher Morcom.

The adult Turing is played by Benedict Cumberbatch (his younger self is Alex Lawther), expanding his repertoire of socially awkward intellectual prodigies, real and fictional. What has made Cumberbatch so effective as Sherlock Holmes and Julian Assange - and what makes his Alan Turing one of the year?s finest pieces of screen acting - is his curious ability to suggest cold detachment and acute sensitivity at the same time. If he did not exist, 21st-century popular culture would have to invent him: a sentient robot, an empathetic space alien, a warm-blooded salamander with crazy sex appeal.

His Turing, whom the film seems to place somewhere on the autism spectrum, is as socially awkward as he is intellectually agile. He can perceive patterns invisible to others but also finds himself stranded in the desert of the literal. Jokes fly over his head, sarcasm does not register, and when one of his colleagues says, ?We?re going to get some lunch,? Turing hears a trivial statement of fact rather than a friendly invitation.

The Imitation Game derives some easy amusement from the friction between this ?odd duck? and the prevailing culture of his native pond. The film?s notion of Britain - not inaccurate, but also not hugely insightful - is as a land of understatement, indirection and steadfast obedience to norms of behavior that seem, to a fiercely logical mind like Turing?s, arbitrary and incomprehensible. At Bletchley Park, the country estate where teams of linguists and mathematicians are working under military supervision to break Enigma, he is seen as stubborn and arrogant. The head of Bletchley, Commander Denniston (Charles Dance), finds him insufferable, as does Hugh Alexander (Matthew Goode), the suave, clever playboy who runs the Enigma project until Turing, with an off-screen assist from Winston Churchill, displaces him.

The Bletchley section, enlivened by the indispensably charming Keira Knightley as Joan Clarke, the only woman on the Enigma team, is the heart of the film, though it is also the most familiar and in some ways the least challenging part. (Earlier dramatizations include Hugh Whitemore?s play Breaking the Code and Michael Apted?s silly, Turing-free 2002 movie Enigma.) Tyldum, a Norwegian filmmaker perhaps best known for the slick thriller Headhunters (2012), orchestrates a swift and suspenseful race against the clock with a few touches of intrigue and ethical uncertainty. Mark Strong pops out of the shadows now and then as a silky, cynical MI6 spymaster, perhaps the only person in the British political establishment who fully appreciates Turing?s oddity and his genius.

The Imitation Game, meanwhile, settles for a partial appreciation. Turing?s sexuality is mystified and marginalized, treated as an abstraction and a plot point. There is no sense that, between his chaste, intense and brief passion for Christopher and the anonymous encounter that led indirectly to his arrest, love, sex or romance played any significant part in Turing?s life at all. Hodges? biography, threaded with quotations from Walt Whitman, gives eloquent and sensitive testimony to the contrary. For their part, the filmmakers, though willing to treat Turing as a victim of bigotry and repression, also nudge him back toward the closet, imposing a discretion that is at once self-protective and self-congratulatory. It?s not that we need to see him having sex - the PG-13 rating must be protected, I guess - but that a vital aspect of his identity and experience deserves more than a whisper and a wink.

The film?s sexual politics may be musty and retrograde, but in other respects, it is very much a document of the present. There are lines of dialogue that sound either anachronistic or - it may amount to the same thing - prophetic. It is thrilling and strange to hear the words ?digital computer? uttered a half-century before any such thing existed, and when Turing says ?think differently,? it is impossible not to hear a grammatically fastidious premonition of the once-ubiquitous Apple advertising slogan. Another sentence - a slightly clumsy invocation of the power of imagination - is repeated three times and sounds each time as if it had been plagiarized from a TED talk.

More fundamentally, The Imitation Game is a parable of disruption. It not only provides an origin myth for the digital age, but it also projects the ideology of the present back into the past. Turing, an eccentric visionary stuck in an organization that is bureaucratic, hierarchical and wedded to tradition, is an apostle of innovation. Commander Denniston lectures him about the importance of ?order, discipline and chain of command? for the war effort, but the solving of Enigma decisively rebuts this old-fashioned notion. The strategic acumen of generals and the tactical valor of soldiers is incidental. What won the war was data, and the heroes were the tech guys (and the one woman) who worked late, snacked freely, fiddled with crossword puzzles and geeked out over a piece of hardware that looked like a giant toy. Hut 8 at Bletchley Park serves as a prototype for the corporate campuses of Apple, Google and Facebook.

Just a few years ago, this film might have felt radical and counterintuitive, like a daring, inspired leap from one era to another, or an excavation of the hidden history of the present. Instead, it has the shiny, hollow ring of conventional wisdom. It?s kind of perfect, and also kind of stale.