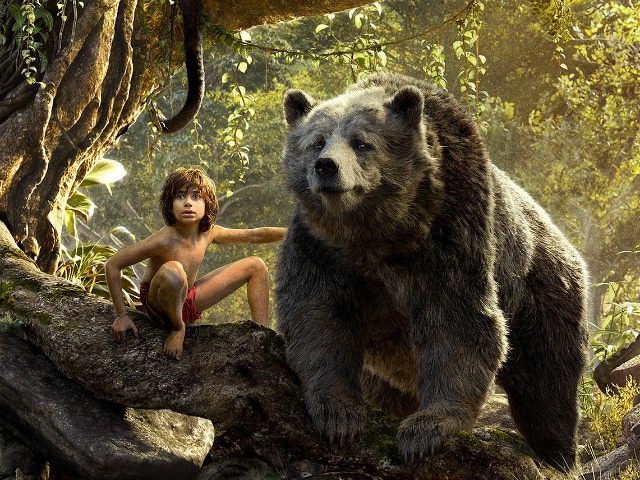 Jon Favreau's zippy reboot of the Mowgli stories is anything but another bland attempt to mine a timeless favourite.

The Jungle Book, scripted by Justin Marks, has a life and logic of its own.

Packed from end to end with stunning action and liberal doses of humour and emotion, the film presses all available VFX tools into service and consistently hits the right buttons.

With the aid of one live actor (debutant Neel Sethi as Mowgli the boy raised by wolves), an array of lifelike computer-generated creatures of the wild, and eye-popping visual effects, the director gives the fantasy-adventure a trippy, whippy spin.

The Jungle Book, filmed entirely in the Disney studios in Los Angeles, transports the audience right into the luxuriant heart of a central Indian jungle and rustles up a riveting, marvelously entertaining film.

India is all over The Jungle Book. So the strategy behind the film's release in this country a week ahead of the US, with the option of savouring a Hindi version with a stellar voice cast, is easy to fathom.

But that poses a crucial question: should those weaned on the stories Kipling wrote over a century ago and the big screen Hollywood adaptations settle for a Hindi-speaking Bagheera or Baloo?

Large swathes of Indian television viewers, whether they were growing up or grown-up in the early 1990s, still have fond memories of the animated series that aired on Doordarshan every Sunday morning.

That number has been revived for the Hindi version of this wondrously magical Hollywood reiteration.

But nostalgia definitely isn't the sole driver of The Jungle Book. It takes the children's tale several notches higher than before, lending it a sharpness that instantly places it in the context of the more cynical times that we live in.

Favreau breaks the boundaries of the genre and lets the story flow out magnificently into a wider narrative terrain.

In Favreau's dazzling vision, the jungle is filled with darkness and danger. Mowgli's struggle for survival here is infinitely more onerous than it has ever been in earlier screen renditions.

The Jungle Book plunges headlong into this fearsome world of predators and preys - it is the only one that Mowgli has ever known - where the man cub's life is under threat from the scarred tiger Shere Khan (voices of Idris Elba and Nana Patekar).

Escorted by his mentor Bagheera the black panther (voices of Ben Kingsley and Om Puri), the boy journeys across the forest in a bid to return to a 'man village'.

On the way, Mowgli encounters many fascinating creatures and confronts many obstacles - and each plot flashpoint is presented with impressive flair.

The man cub runs into Kaa the python (voices of Scarlett Johansson and Priyanka Chopra) who casts a hypnotic spell on him and the laidback Baloo the bear (voices of Bill Murray and Irrfan Khan) who loves nothing more than lolling about in the undergrowth while others do his bidding.

And, of course, Mowgli is captured and carried by an army of simians to the den of the manipulative King Louie (voices of Christopher Walken and Bugs Bhargava), a mammoth orangutan with an agenda.

The latter seeks to arm-twist Mowgli into parting with the secret of the "only thing we need to realise our full potential - the red flower (jungle-speak for fire)".

Favreau, aided by the very best VFX technology, lends a mythic proportion to each of the major characters. You are right, Mr. Nihalani, they do spring out of the screen.

Favreau's grand imagination, however, has space for the minutest 'human' emotion - from she-wolf Raksha's maternal instincts to Bagheera's protective derring-do to the slothful Baloo's deep bonding with the man cub.

Kaa the python is gender-flipped and turned into a seductive female with a voice and a pair of eyes that help her ensnare a victim.

"Trust in me," she hisses to a memerised Mowgli, stopping short of breaking into song.

In Hindi, Priyanka Chopra does a fair job of capturing the air of dread, but "Vishwas karo mera" simply isn't toxic enough to send a chill down the spine.

Om Puri, the fine actor that he is, is hardly the best choice for Bagheera's voice and Irrfan Khan's Punjabi accent for Baloo isn't a felicitous call.

But who cares when the accompanying visuals and the pace of the narrative are as good as they are?

Two aspects of The Jungle Book help it soar above the ordinary. One, the two parting scenes in the film are absolute zingers.

When adoptive mother Raksha (Lupita Nyong'o/Shefali Shah) bids Mowgli farewell and reminds him that he will always be her son, she touches an instant collective chord.

Ditto when Baloo, with the man cub's best interests at heart, puts up a brave front and advises Mowgli to leave the jungle and return to his kind for good.

That apart, the central idea of a man brought up as a feral creature filled with 'humanity' is utilized to the fullest and built upon by Favreau in ways that stand out in sharp relief.

Shere Khan is determined to eliminate Mowgli because of his hatred for and distrust of Man. "Man is forbidden," he growls ominously.

In contrast, Baloo worries that they (the village) will "make a man of him" and destroy the wiles that he has gathered in the wild.

Bagheera, pretty much like the leader of the wolf pack Akela (Giancarlo Esposito/Rajesh Khattar), tells Mowgli that he isn't a wolf and should, therefore, fight Shere Khan "like a man".

The Jungle Book is a classic genre film that harnesses the inherent strengths of the source material to rustle up a captivating drama that is both epic and intimate.

Is it scary, as Pahlaj Nihalani would have us believe? Not the least bit, if one discounts a scene in which Shere Khan lunges at Mowgli.

For sure, there isn't a dull moment in The Jungle Book.

It is a film for children and adults alike. Not to be missed.