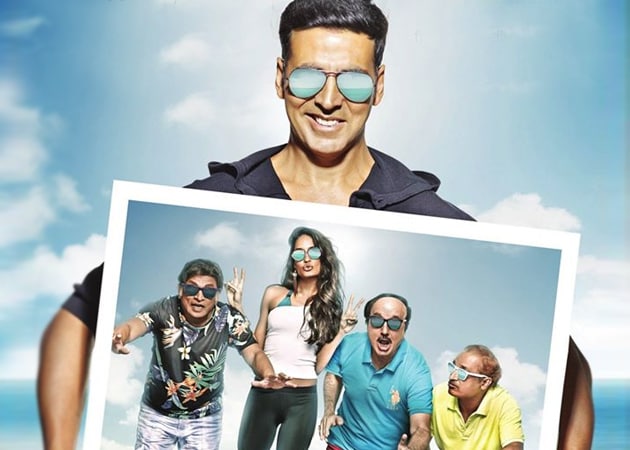 But for the refreshingly self-deprecating humour that co-producer and cast member Akshay Kumar directs at himself and his acting career all through the film, The Shaukeens would have been an outright washout.

This film is a disaster all right, but it is mitigated somewhat by a quirky if uneven subplot that has Akshay playing himself and poking constant fun at the work that he has done thus far as a Bollywood actor.

As he shoots a regular flick in Mauritius, the star awaits the arrival of a director named Ranjit Basu (Subrat Dutta).

This guy has numerous National Awards in his kitty and he has supposedly rustled up a role that could rescue Akshay from the Rs 100-crore rut.

Desperate to win a National Award of his own, Akshay gives the deadly boring director a long rope even as he spouts pretentious mumbo-jumbo about method acting and getting into the skin of a character.

Akshay does heed the man's sage advice, but not quite in the way that one would have imagined.

Matters spiral out of control and not the least because of the repeated intrusions into the actor's make-up tent by a crazy female fan.

But all this is only secondary to the main narrative, and it is here that the film comes completely unstuck.

Written by Tigmanshu Dhulia and directed by Abhishek Sharma (Tere Bin Laden), this is an update of the 1982 Basu Chatterjee comedy, Shaukeen. It turns out to be an exercise that can only be described as ill-advised.

Shaukeen is the third early 1980s Hindi comedy (after Sai Paranjpye's Chashme Buddoor and Hrishikesh Mukherjee's Khubsoorat) to be remade in the span of a year.

The returns have been meager and yet it is unlikely that Bollywood is going to give up any time soon.

Devoid of the innocence and spontaneity that helped the three older comedies rise above their limitations and attain longevity, The Shaukeens shows why the classics should be left alone.

It isn't just Shaukeen that this film mercilessly cannibalizes. It also filches elements from 1971's Guddi and weaves into its messy mish-mash the story of a girl hopelessly infatuated with a movie star.

The title of the film refers to three dirty rotten scoundrels who have sex, and only sex, on their minds.

Their puerile attempts to satiate their lust do not yield much joy either for them or the audience.

The Shaukeens lacks the sense of good-natured fun that underlined the original film, in which, thanks to the efforts Ashok Kumar, Utpal Dutt and AK Hangal, the lecherous old men came across as a largely harmless trio out to seek the thrill of illicit liaisons in the autumn of their lives.

The triumvirate in The Shaukeens - three Delhi men who see girls only as objects - is unlikeable, and none of what they do in their own city or in Mauritius can be deemed to be acceptable behavior even for males half their age.
Frustrated with their lives, the three sexagenarian friends - Connaught Place shoe store owner Lali (Anupam Kher), social worker KD (Annu Kapoor) and Chawri Bazaar masala merchant Pinky (Piyush Mishra) - head out to Mauritius.

They rent the bungalow of a pretty young thing, Ahana (Lisa Haydon), a fancy-free designer who recycles used material into ready-to-wear clothes and accessories.

Having broken up with her long-time boyfriend, she aborts a planned road trip and returns to her seaside home.

The three men cannot contain their excitement on seeing the girl in their midst and decide to hit the beach with her.

The trouble with The Shaukeens is that both the characters and the film as a whole hit all the wrong buttons in a bid to generate mirth.

Akshay Kumar, who also doubles up as the narrator, is the only one in the cast who seems to have had a certain degree of genuine fun. The rest merely go through the motions.

The leading lady of The Shaukeens ditches her boyfriend because, in her words, "he made fun of my creation and called it stupid and obnoxious".

That is it: those are the very adjectives that would best describe this unfunny, eminently avoidable film.